Phantom Breaker: Battle Grounds is a pleasant surprise. I'm a huge fan of brawlers and hadn't heard a thing about this game; it's not often that I download something on Xbox Live Arcade sight unseen. Usually, this spells complete disaster - but not this time. Despite some rough edges, Battle Grounds is a unique and deep quest for fans that have maxed out all of their characters in Castle Crashers and Scott Pilgrim vs. the World.

Inspired by Guardian Heroes, battles take place on two different horizontal planes. Limiting vertical movement into two planes allows for the deeper, fighting game-style combat to shine. I don't necessarily want this system in every brawler, but it's nice to see it in the mix again. It's not without annoyances, however; huge enemies battling in the foreground can completely cover up the action in the rear plane. Finishing that one last goon who keeps hopping between planes can also be a hassle at times.

All of the characters' attacks feel unique (rather than the lame palette swaps that are common in the genre). Weak, medium, and heavy strikes handle the core combos while the "specials" button combines with simple directional movements to pull off useful and impressive moves like air juggles, screen-filling lasers, and whirling tornados.

The action gets crazy, and that carries over to the main cast. Waka is a shrine maiden with a spear, Mikoto carries a sword, Itsuki wears a maid outfit to complement her hammer, and Yuzuha is some kind of ninja schoolgirl with daggers. The silliness doesn't stop there. You fight a wide range of possessed humans, pesky robots, and huge monsters. On top of this, most of the bosses are other characters from the original fighting game with motives about as complex as what you'd find in a Mortal Kombat or Street Fighter plot.

Mashing buttons will get you relatively far in the lower difficulties, but you're going to want to take the time to truly understand the battle system and master all the cool moves available. Unfortunately, this process is a huge hassle. The poorly translated instructions are in a rudimentary menu, forcing you to memorize what you can and bring that knowledge back to battle. I recommend turning to the also poorly translated official website for more detail and the ability to look at commands while playing.

Red gems dropped by fallen foes serve as the prime currency for upgrading characters. The skill tree holds all varieties of fancy special moves. Some upgrades are simple to understand, like a double jump, but many high priced options have vague descriptions and no controller input instructions so you don't really know how to perform the thing you just bought. Again, take to the website to learn more about this stuff.

You can also invest in a separate attack, speed, and defense stat category to beef up your character, but with the level 50 cap, you can only max out either the skill tree or the stats. You are constantly faced with the decision to unlock more of the battle system or take and receive more damage. Fortunately, you can respec your points easily with no negative consequences to constantly tweak things to your play style. The four-player co-op has its own set of plusses and minuses. Online play is a blast as long as everyone's got a solid connection. Offline is more reliable, but your buddies can only power up characters on the host's profile rather than importing their own. For some reason, all of the story sequences are removed from co-op. I didn't mind since I had already seen them in single player, but I'd at least like the option to show them to friends. The strangest choice is that you can't tweak your skills and stats in co-op without exiting out to the main menu, whereas solo players can do it in the continue screen or between stages.

The best part of co-op outside of the natural camaraderie boost is the ability to play as a multitude of unlocked special characters outside of the core group of four. These people, mostly bosses, are all just as deep as the main characters and add to replay value tremendously.

Battle Grounds includes a couple of other modes as well, but they aren't particularly impressive. Arcade mode is for those who care to compete on the leaderboards, have time to play through the entire game in one sitting, and are looking for a way to solo with the cast of side characters. Battle Ground mode allows up to four players to fight each other online or offline, but since you use your roster of leveled characters, victory heavily favors the more juiced player. Having this as an option is nice, but it's not much more than a quick diversion.

Battle Grounds is not the super-polished experience of many of today's top brawlers, but it's definitely worth a look if you're interested in the genre and are at peace with familiar anime tropes. 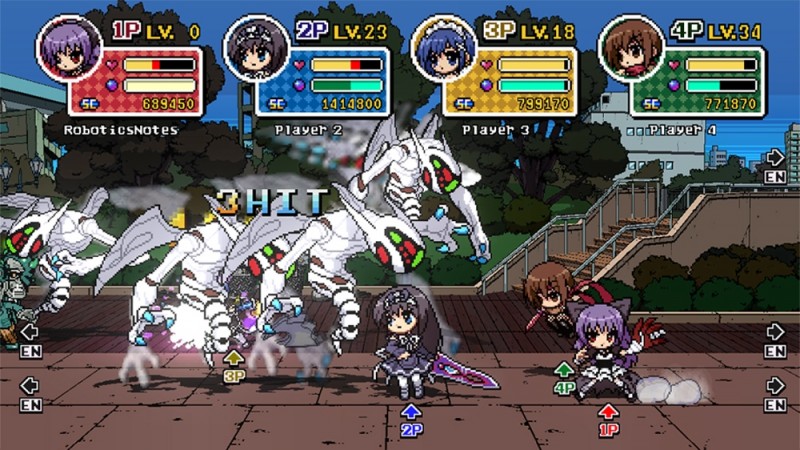 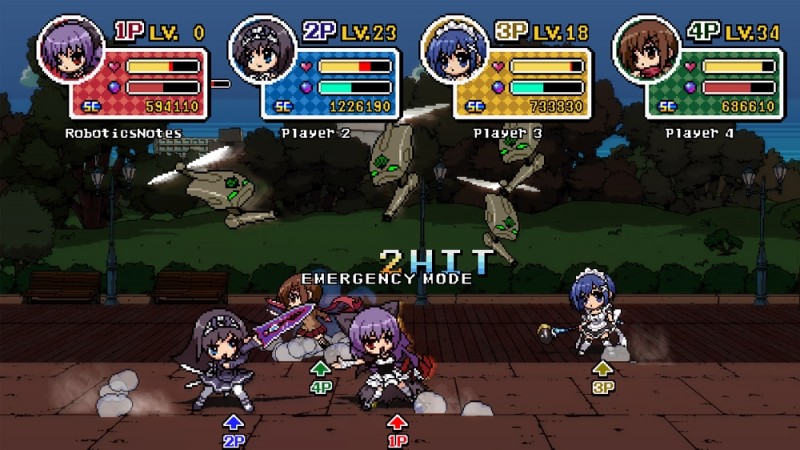 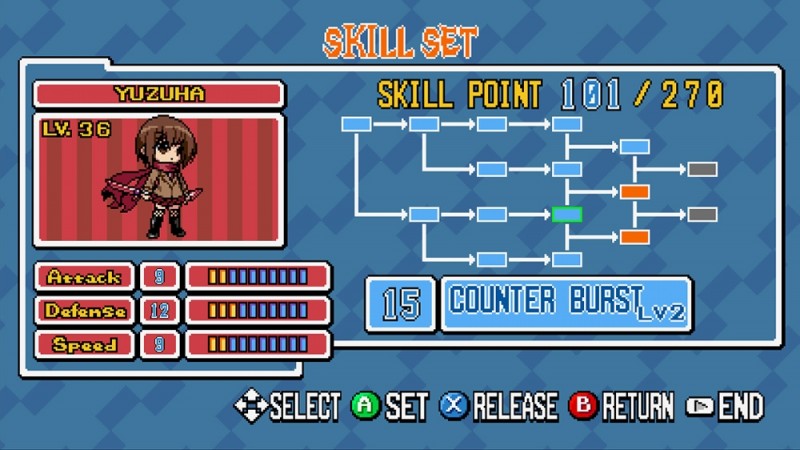 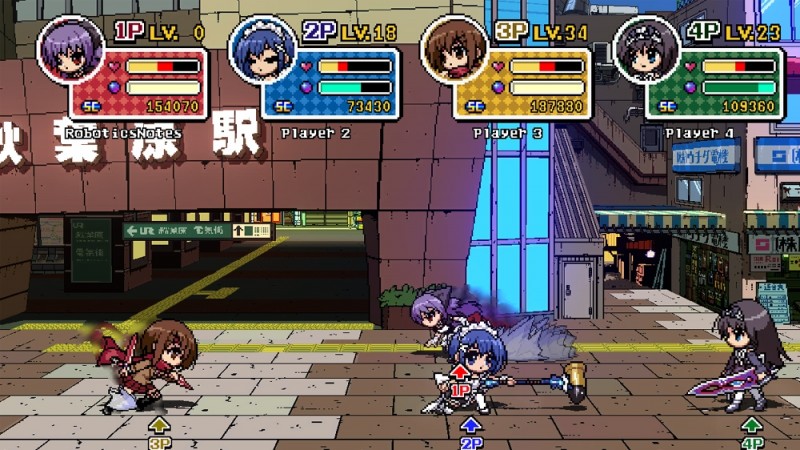 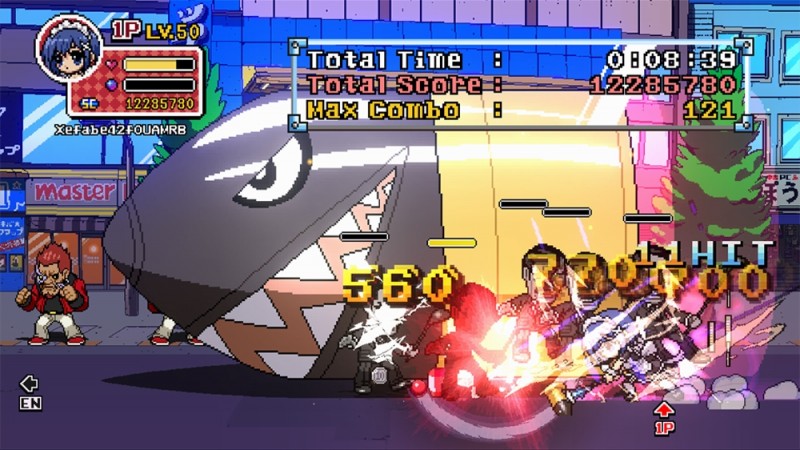 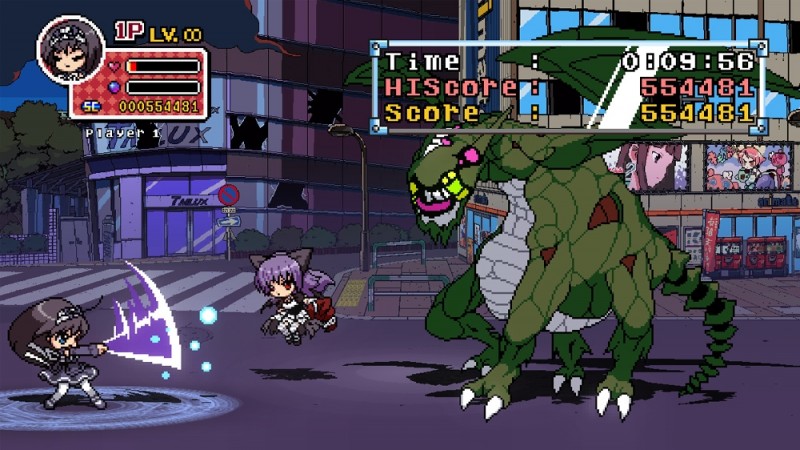 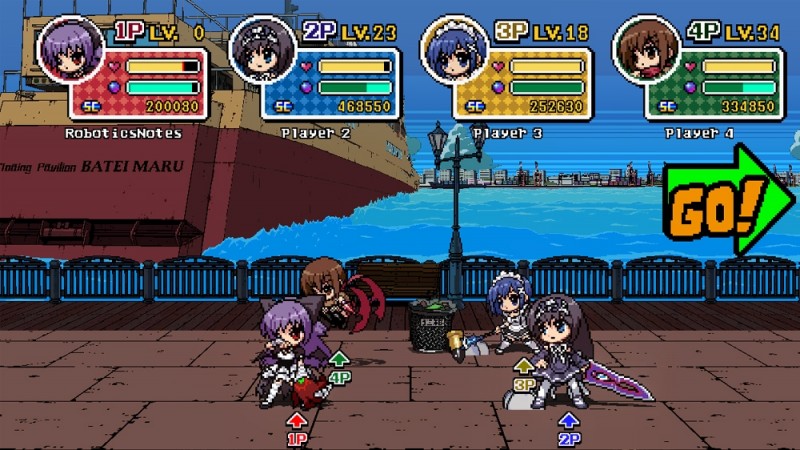 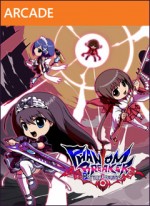 Download something on Xbox Live
Arcade sight unseen is usually spells complete disaster, but not this time.

8
i
Game Informer's Review System
Concept Make a brawler spin-off to a fighting game that hasn’t made it to North America yet
Graphics The cartoony pixel characters will immediately appeal to fans of the Scott Pilgrim game
Sound A catchy theme song and subtitled Japanese dialogue fit the mood well
Playability The in-game instructions could be a lot clearer, but the battle system is impressive once you get in the swing of things
Entertainment This is clearly for a very specific niche. If you’re cool with cute anime girls beating the heck out of possessed businessmen and demons, you’ll have a good time
Replay Moderately High