Survival horror makes you feel threatened through your limitations. Perception takes this philosophy to an extreme: You play as a blind young woman named Cassie, maneuvering through a haunted mansion with echolocation, all while a ghostly presence stalks you. By teasing you with the unknown and playing with your senses, Perception largely succeeds at horror with its novel concept.

Cassie travels to Massachusetts to investigate an abandoned mansion that has plagued her nightmares. To search for the truth, players rummage through belongings of the house’s past inhabitants to solve compelling mysteries. You complete character-driven tales of the home’s ghostly inhabitants, jumping through time as the estate transforms to represent each chapter’s era, as far back as the 1600s.

The residents include an overly medicated mother and a tinkerer of creepy mechanical dolls – all with the house’s supernatural forces making them paranoid about their problems and affecting their sanity. For example, when one character worries for her husband fighting overseas, the mansion’s aesthetic turns into a warzone. The premise is strange, but the individual stories are compellingly morbid and propel the narrative forward.

In each scenario, you “see” with echolocation, and visual cues occur through sound. With the tap of your cane (or ambient noise like TV static and footsteps), your surroundings become more visible in crude blue outlines. It’s an intuitive mechanic that makes you feel vulnerable, especially when a monster known as the Presence can hear you.

Every time echolocation is used, the creature gets closer to hunting you down, and your only chance of survival is scoping out a hiding spot.

Perception is largely about gauging how safe you are. Whether echolocation will help you proceed to your next goal or attract an unwanted enemy depends on your foresight. This is a game of hide-and-seek, and it is an unnervingly entertaining experience when your sight is limited.

Outside of echolocation, Cassie’s only tool is her phone, which she uses to scan labels or read notes through text to speech. She also uses an app called Friendly Eyes, where you briefly chat with a customer representative who describes things you can’t see. These chats bring some light humor, and other times they just add to the fear. While jump scares occur every once in a while, Perception’s biggest terrors are the ones you can’t see and the mind tricks that make you question reality. Quick flashes of a ghoul in the distance or the creak of a door closing would spook me.

Augmented by these frightening moments, Perception’s story is well-written and focused on exploration. The solid voice acting brings life to mundane objects, where you trigger a ghost’s memory by examining things like a paint brush or mug. Perception’s biggest drawback is while it emphasizes exploration, you’re limited in terms of how well you can explore a room when echolocation attracts enemies. The game also features mostly monochromatic environments, an aesthetic that gets old as the journey continues, but the ever-changing house brings variety to areas you revisit.

Perception is a memorable horror experience that thrives because of its unique setup and gameplay. Although more unsettling than downright terrifying, Perception managed to keep me on the edge of my seat, forcing me to solve a compelling mystery by facing what lurked in the dark.

8.25
About Game Informer's review system
Concept
As a blind woman, you maneuver through a haunted mansion using echolocation
Graphics
The crudely outlined, blue-hued graphics can be dull, but they add a sense of mystery to your surroundings
Sound
Perception’s sound design is fantastically atmospheric, making scares more tense
Playability
Moving around the house is smooth and easy, with markers telling you where to go
Entertainment
Although more unsettling than outright terrifying, Perception brings some novel ideas to the horror genre
Replay
Moderate 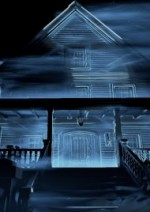