In the blink of an eye, Peggle 2 transforms from a fun game of precision and skill to an overly joyous celebration with fireworks exploding, Amilcare Ponchielli's “Dance of the Hours” blaring, and a yeti exposing his buttocks in a strange, energetic dance. Outside of a fictional animal giving us an unexpected eyeful, Peggle 2 doesn’t deviate from the series’ gameplay conventions, riding them to great effect in a variety of nicely designed levels.

Player input remains small: Swivel a turret. Fire it. Cross your fingers and hope that the trajectory you plotted sends a silver ball ricocheting against as many colored pegs as possible. Victory is achieved once all of the orange pegs are removed from the board. The formula is simple, but immensely rewarding. Watching the ball bounce across the board is a strangely intense experience, as physics take hold and dictate the degree of success or failure. PopCap does a great job of amping up the excitement when only one peg remains, zooming in and slowing the action down to see if your silver ball will hit its mark. The only deviation from the series’ core design is the addition of new armored pegs that must be hit twice before they can be removed.

Anyone can pick up, play, and find success in Peggle 2. Skilled players will fly through levels faster, but even toddlers who don’t know how to play games can clear stages. Case in point: My friend’s three-year-old daughter cleared out an entire 10-stage section. She had to play one stage over a dozen times, but eventually got the luck of the bounce that she needed.

While victory in the traditional designed levels can only be achieved by hitting all of the orange pegs, bonus challenges provide additional replay value. Each stage pushes the player to complete three of these optional tasks. These objectives range from winning with five balls left, breaking a specific score, getting a certain number of points in one shot, racking up style points, and winning with a specific character. Side tasks reward you with new character skins and achievements. They didn’t change the way I played the game the first time through, but they did bring me back for additional playthroughs.

In addition to 60 levels, your specific skill sets are put to the test in 60 Trial levels, each offering a different goal like clearing 45 pegs, or tackling a level with a character’s special power always on. The trials are a little harder than the core experience, but many of these stages don’t last for more than a few seconds, if you are skilled enough to accomplish what is asked of you.

The only returning character is the magical unicorn Bjorn, whose special power is a trajectory bonus that shows the ball’s bounce pattern. The other characters are an ogre named Jeffry who throws boulders at the pegs, a yeti named Berg who can turn the level into a slick sheet of ice that sends pegs sliding into others, a gnome named Gnorman who electrifies his shots, and a ghost girl named Luna who makes blue pegs dematerialize.

As satisfying as it is to rack up a huge score on one shot, the game penalizes you for it with automated game clip recordings. I know this is supposed to be a reward that you can go back and watch, but great shots are not uncommon. In one gameplay session, Peggle 2 added over 20 clips to my Xbox One profile page.

Four-player online multiplayer is a part of the package, but there isn’t much to it. All of the players fire shots on their own boards at the same time. At the end of a turn, a leaderboard appears, showing who scored the most points. A total score is accumulated over 10 turns. For some strange reason, you won’t always be dropped into a new game. You may enter a game on turn six with no points, forced to play the majority of the game in a losing position until a new one starts. Several of my matches also had a fair amount of lag.

Peggle 2 is surprisingly void of a free-to-play framework, although a shop is listed as “coming soon.” It’s one of those games that you can just pick up, play, and have immediate fun with. Yes, it plays out more like a level pack than a true sequel, but that’s okay with me. As long as this formula remains entertaining, I wouldn’t mind more of it.

8
About Game Informer's review system
Concept
Shoot silver balls at colored pegs. Repeat until you are satisfied
Graphics
The characters are animated nicely, but there really isn’t much to look at here. Just sharply defined blue and orange pegs
Sound
One of the most uplifting scores yet. Even scrolling through menus brings soothing melodies
Playability
Skill and luck combine in every shot fired. Trial stages and bonus challenges give players more reason to come back for more and try different shot trajectories
Entertainment
There’s something oddly enjoyable about watching a ball bounce around on pegs
Replay
Moderately High 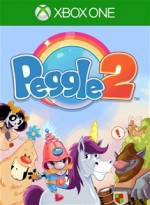