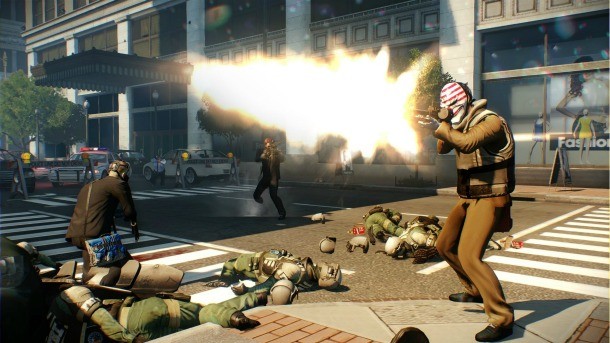 No game has captured the thrill of the heist quite like Payday, which is why more than nine million criminals in training have flocked to the series since its debut in 2011. Rather than prep a new release for the PlayStation 4 and Xbox One, 505 Games is following the recent trend of porting successful games from the previous generation to the platforms with Payday 2: Crimewave Edition. The results are a mixed bag.

The essence of Payday 2 remains fully intact. While talented four-player teams can successfully crack bank vaults and lift valuable art from high security museums with minimal interference from police, the majority of us blow the covert ops early and spend the rest of the mission fending off waves of increasingly difficult police details while fixing overheating drills, picking lockboxes, and hacking computer systems.

Crimewave Edition adds all the post-release content from the PC version, so players have a greater variety of heists, weapons, and playable characters (including current A-list assassin John Wick) to enjoy. The increased number of heists in particular gives the game a welcome dose of variety, and the new hardware allowed Overkill Software to up the resolution to 1080p, but don't expect a huge jump in graphical quality.

Outside of these improvements, Crimewave Edition does little to improve the base game we recommended two years ago. All of the flaws present in the original return, looking that much more glaring given the passage of time. Most disappointing is the A.I. support should you try and go it alone offline. Your criminal companions largely take care of themselves, staying on their feet and returning fire on your pursuers, but Overkill neglected to let you direct them to perform vital tasks like fixing overheating drills. This inconvenience also means players must haul all the precious cargo back to the getaway vehicle themselves, making the heists take exponentially longer than they do while playing with other people online.

Developers like Rockstar Games planned their games' inevitable migration to the new consoles smartly, allowing players to carry over their progress after jumping platforms. This did not happen with Payday. With support for the game drying up on the older platforms, you may be tempted to make the jump, but don't expect your hard work to follow you in the transition. When you pick up Crimewave Edition, you are starting from scratch. Thankfully, many high-end missions are available from the get-go, meaning you can rank up quickly and earn the perks and skills you find most useful in a few hours of play.

Gathering the type of weapon accessories you want is still frustratingly left to chance. After each successful mission you are awarded randomized loot like weapon attachments, mask materials, or straight cash. Overkill's stubborn clinging to this common free-to-play design mechanism is maddening when you have millions of dollars in you offshore account yet you can't buy the scope or silencer for your preferred weapon.

Payday 2's novel heist-based gameplay is still worth checking out for those interested in a refreshing cooperative experience. For veteran criminal masterminds, however, the return of easily fixable problems and lack of account migration make it hard to justify the jump from previous versions.

7
About Game Informer's review system
Concept
Meticulously plan a heist, only to inevitably end up in firefights with law enforcement while you try to make the big score
Graphics
The jump to 1080p is nice, but this is far from the best-looking new-gen game
Sound
The fast-paced electronic beats meld perfectly with the high-octane shootouts with police
Playability
Not the tightest shooting experience on the market, but it suffices
Entertainment
The most thematically coherent heist game on the market, Payday 2 offers a refreshing respite from military and sci-fi shooters
Replay
High 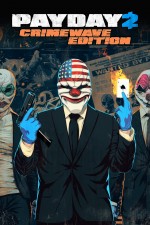