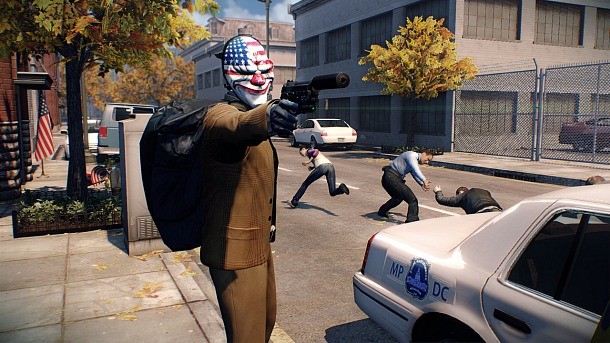 After studying the blueprints and reading the dossier, my crew knows the gameplan. Our job is to snatch four paintings using whatever means necessary. While the Mastermind and Ghost pick the side door lock and move into the museum, the Enforcer and I go up to the roof to get the lay of the land. A security detail diligently patrols the galleries, while another guard sits behind the desk in the front entryway. We mark the targets so the other two know where they are. The getaway van is idling around the block, waiting for us to make our move.

It doesn't take long for the heist to head south. The entryways between galleries are guarded by laser detectors, and while doubling back, a security guard spots Ghost. He instinctively headshots the poor sap, and the gunshot echoes down the hallway. So much for stealth. Another guard trips the security alarm and the entire building goes into lockdown. With all the paintings now protected by metal bars, we need to drill into the security room. The cops will be here soon, and we haven't even grabbed our first painting.

Welcome to the haywire world of Payday 2, where almost nothing goes as planned and every job turns into a lengthy exchange of bullets with local law enforcement. This sequel reinforces the addictive gameplay experience of the 2011 original with 30 mission types (instead of the last game's seven), a deeper skill/upgrade system, and the refined gunplay necessary to keep up with the incessant waves of coppers gunning for your head.

Once they set up shop in a safe house that features interactive tutorials for teaching players the art of the heist, upstart criminals can look for work on Crime.net, a LinkedIn of sorts for people who would rather hold up coffee shops than get a free cup of java at a steady 9-to-5 gig. At the beginning of your illegal career, you only have a few jobs to choose from, but as you prove your worth, you gain access to more intricate and difficult jobs with much higher payouts.

After knocking off jewelry stores and banks, I was soon involved in much more complex dirty work. During the three-day art job, we broke into the museum to steal the precious artwork, embedded small cameras into the frames to track the buyer (a prominent politician), then broke into his luxury apartment to download sensitive information from his server. Other freelance gigs included stealing an engine prototype from an inventor, cooking a batch of meth during a drug raid, and laying waste to a mall to send a message to its owner. The mission diversity is a much-needed step forward for the franchise.

Completing a heist rewards you with the agreed upon fee (most of which goes into an offshore account you can't touch), a loot drop, and XP that feeds into your RPG-like level progression. Each time you rank up, you gain an ability point you can spend on one of the four skill trees. The Mastermind has a way with words and can talk a cop into laying down his weapon. The Technician brings gear like a faster safe drill and a sentry gun. The Ghost is a vital member if you want to take a stealth approach; he can disable security cameras and alarm systems. The Enforcer can move faster while carrying bags and use a portable saw to quickly break through doors.

Your ill-gotten gains can be spent on 26 weapons, their varying attachments, and new masks. Weapons are unlocked for purchase as you level up, but getting good attachments requires a bit of luck. You receive a new mask material, new mask colors, or a new attachment during the post-mission loot drop. You can only purchase barrels, stocks, or sights after you receive them from this randomized system. These upgrades aren't cheap, either - one weapon sight costs a shocking $240,000. This convoluted reward structure stands in the way of creating your favored loadout; even after 20 hours I still didn't have anything close to my ideal gun modifications.

The best way to play Payday 2 is with three other friends; in my experience the teammate AI isn't savvy enough to keep up on the job. The AI-controlled characters can handle a gun, but oftentimes wander out of a building into compromising situations. You can order them to follow you, but they won't help drag the loot back to the car. This can double or triple the time it takes to successfully pull off a job while under constant fire. Since the game punishes failure, offering only a miniscule XP bump for a botched job, dragging the AI into the fray isn't worth it. The enemy AI can be similarly harebrained; I caught several SWAT members cluelessly staring into oblivion in the middle of a police assault.

Payday 2 gives players the tools to attempt stealthy heists (some of which aren't accessible until you're well into the game's 100 progression levels), but going the Mission Impossible route requires a refined balance of patience, coordination, cleverness, and luck beyond that of the normal player group. I'm curious to see if anyone can successfully rob a bank or museum without resorting to violence, because we rarely made it past two-minutes without having cops arrive on the scene.

Pulling off a frictionless heist is the exception to the rule in Payday 2, but the tension is still palpable as you try to orchestrate a robbery without getting caught, and the adrenaline flows steadily as you inevitably repel the barrage of police waves while trying to make your getaway. The overly expensive upgrade system and lackluster AI could use some work, but the minute-to-minute action is thrilling enough to overcome these complaints.

Pulling off a frictionless heist is the exception to the rule in Payday 2, but the tension is still palpable as you try to orchestrate robberies and inevitably repel the barrage of police waves.

Purchase More Info
8.25
i
Game Informer's Review System
Concept Become a player in the criminal underworld by knocking over jewelry stores, robbing banks, and running drugs
Graphics The 30 locations offer much more variety than the last game, but the environments still get repetitive
Sound Simon Viklund’s electronic soundtrack perfectly captures the tension of attempting to pull off a heist and the anxiety when the job inevitably goes awry
Playability Like classic heist movies such as Heat and Oceans Eleven, Payday 2 trades on the thrill and danger of operating on the wrong side of the law
Entertainment Payday 2 is meant to be played cooperatively with three other people. If you’re a person short expect a much tougher job thanks to the unintelligent teammate AI
Replay High