National security is a touchy subject, especially considering the lines some countries walk between privacy and protection. Most gamers have no idea what it may be like to uphold a nation’s strict immigration policies, but I feel like I have an inkling having played indie developer Lucas Pope’s eccentric and engrossing Papers, Please.

Players assume the role of a checkpoint guard assessing travelers’ documents as they attempt to cross borders between socialist (and fictitious) European countries. Pay is determined by how many would-be travelers you process correctly. Approving too many people with false documentation, or denying too many people with proper papers, results in fines that are deducted from your meager salary. Accumulate a pile of citations and spend evenings choosing between paying for food, heat, or medicine. The added pressure of caring for your family adds significance to every inspection. I winced at the sound of the printer coughing out another citation, and beamed when awarded a plaque for sufficience.

Your daily job is made up of smaller victories and defeats. You meticulously cross-check information on passports, work visas, immunization records, ID cards, diplomatic immunity papers, and a host of other superfluous rigmarole. I carefully set up my desk each day; the rule book goes in the upper left, where I can flip between pages to make sure the issuing city listed on passports is genuine. The top three most-most wanted criminal mug shots go towards the right, so their faces line up with passport photos. Organization, efficiency, and focus are paramount for survival.

Settling into a steady rhythm of accurate document processing may sound boring as hell, but Papers, Please makes it stimulating. It’s also a thought-provoking glimpse into the lives of those struggling against the oppressive governments of developing nations. The grim nation of Arstotzka is made up, but I found myself empathizing with real people today that face harsh immigration laws, terrorism, and corruption in their daily lives. It also offered me new perspective on TSA workers and other security personnel who might compromise their ethics by simply following orders to support a family. Papers, Please offers up intriguing philosophical situations while making it compelling to become an organized security guard.

Developing a reliable system is important, but wrenches get thrown in the gears. Sometimes travelers forget to hand over a certain document, which can throw off your flow. Name discrepancies require a fingerprint check. Inconsistencies in weight or gender call for body scans, which can reveal bombs, drugs, or misdocumented genitalia. These transgressions are grounds for detainment, which can score you a share of the jailor’s bonus. Spotting a crook and putting them away strokes the ego of my inner detective.

Terrorists occasionally attack the border guards in bloody acts of political unrest, which is where my favorite gameplay mechanic comes into play. Early on, acts of sabotage shut down the checkpoint, robbing you of the rest of the day’s potential income. Later you’re bestowed with the duty of firing tranquilizer darts at would-be assassins. The gun is locked behind a special box that only appears when the alarm sounds. I placed the gun locker’s key in a special spot on my desk, so I knew where it was when it came time to drag it over, unlock the gun, and take aim. Gunning down insurgents comes with a decent cash bonus, which becomes necessary for recompensing lost wages from the lockdown. Hearing the alarm in the midst of your routine is shocking and exciting. I love the sense of duty and reward patrolling the nation’s unpredictable border comes with.

The standard formula of clearing travelers is engaging, but more involved story lines pop up throughout the 30-day campaign. A shadowy organization offers huge bribes in exchange for letting one of their agents slip through. A Gestapo-esque inspector threatens to audit you. A pesky but lovable miscreant repeatedly attempts to pass with hilariously fake documentation. These characters present dilemmas testing both your morals and greed. These various threads lead to 20 different endings, some more rewarding and complete than others. One early ending included the death of my family and subsequent dismissal, but I still felt motivated to discover more. A timeline save system allows you to revisit and branch off from any day in the campaign, which makes experimentation fun and easy.

Papers, Please is a tough sell. It’s a desk job on the surface, but lurking behind the tedium is a deep experience that rewards keen eyes and efficiency. The satisfaction that comes with surviving a shift with a few extra bucks is remarkable, and is made possible by the oppressive mood that developer Lucas Pope has crafted. I also walked away with a slightly different perspective on real-world international strife, which is well worth the grind. 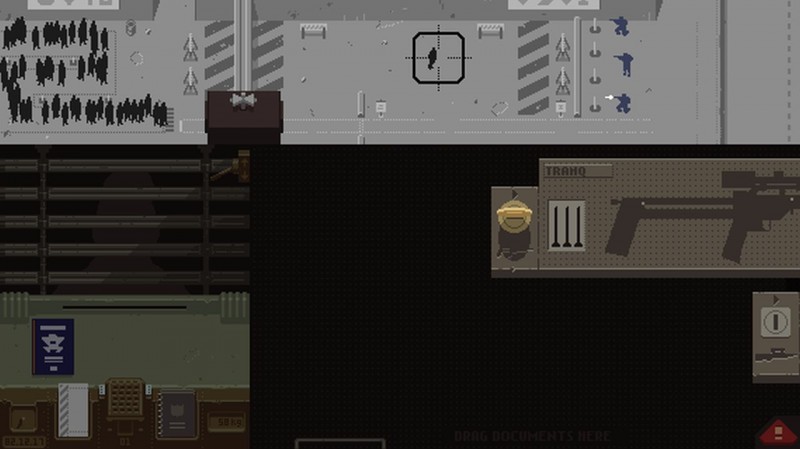 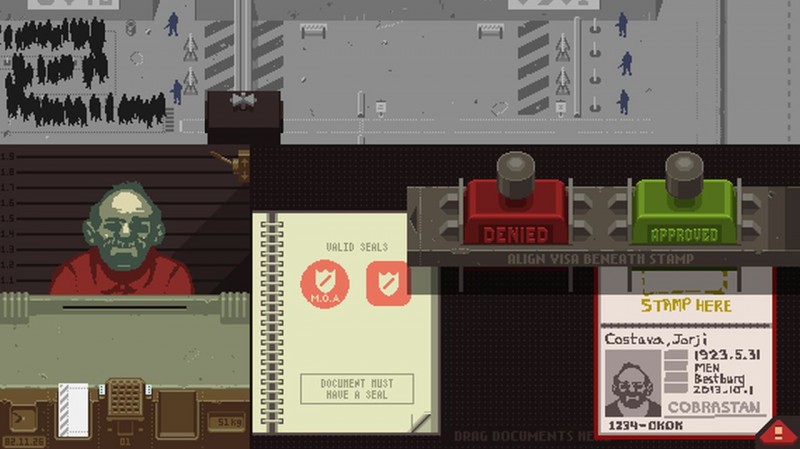 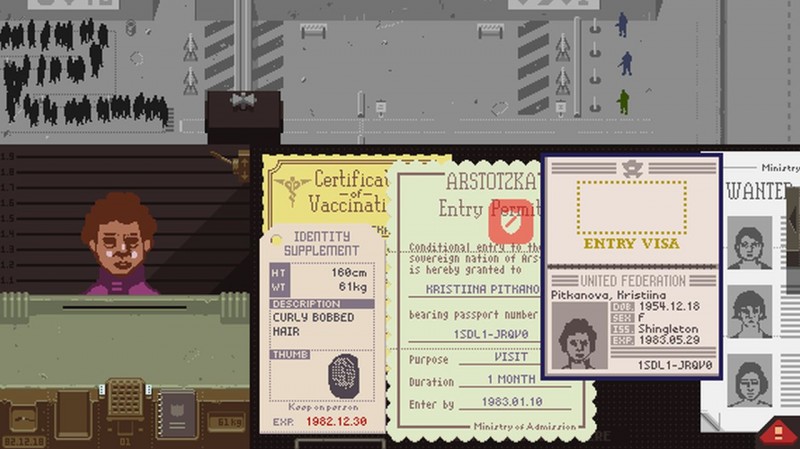 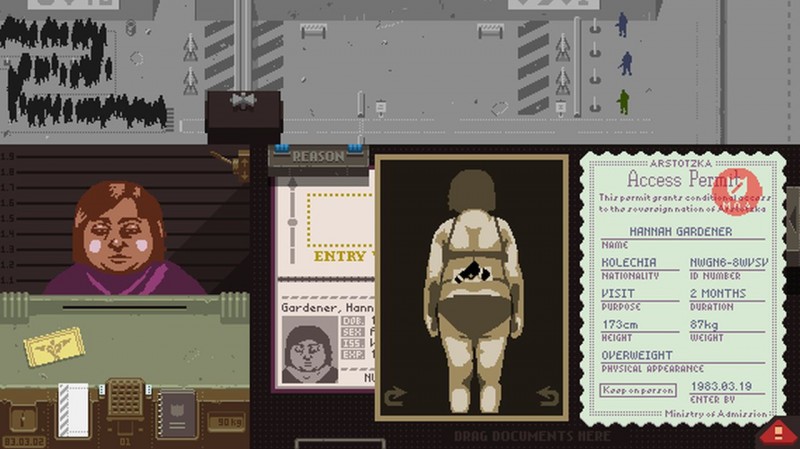 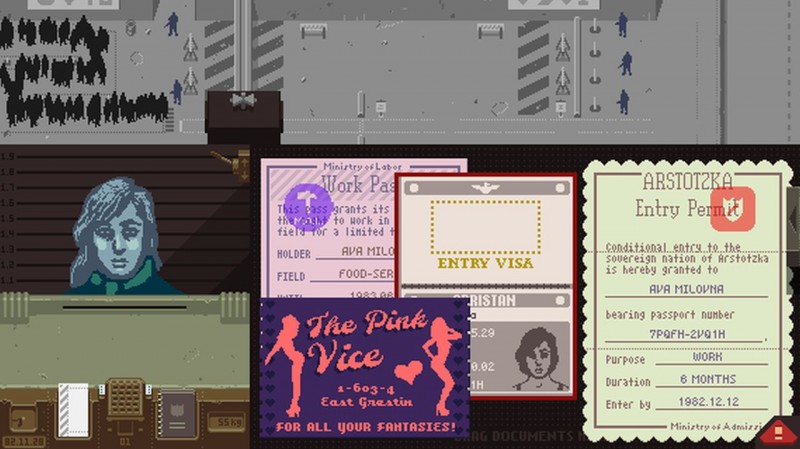 8.5
About Game Informer's review system
Concept
Process travelers’ documents at a security checkpoint, complete with terrorist attacks, bribes, and the pressure of supporting your family
Graphics
Clean and simple retro graphics make it easy to analyze documents and faces without being overwhelmed by details
Sound
Except for the sound of thudding stamps, audio is rare. I jumped whenever the alarm sounded during a perimeter breach
Playability
Your performance and pay is determined by how quickly you can move your mouse cursor
Entertainment
Trying to accurately process dozens of travelers before quitting time creates tense but rewarding work days
Replay
Moderately High 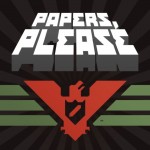