Nintendo’s Paper Mario and Mario & Luigi series are both rooted in the original Super Mario RPG. However, while the Mario & Luigi games have clung to traditional RPG mechanics like experience-based leveling and upgradable equipment, Paper Mario has strayed from that foundation. Color Splash is almost unrecognizable as an RPG, but it is still a delightfully humorous journey through the Mushroom Kingdom sure to appease series fans and newcomers.

Color Splash begins with Mario traveling to the exotic isle of Port Prisma, where he discovers that Bowser has mustered an army of Shy Guys with straws to suck the color out of this vibrant papercraft world. Mario partners with an anthropomorphic paint can who fills Mario’s iconic mallet with paint, and our hero begins hammering the paint back into the world. Throw in a princess kidnapping and several collectible stars and you have a classic Mario story. More than anything, Color Splash is a testament to the skill to Nintendo’s localization team, which has masterfully taken a series of bizarre situations and filled the game with clever, belly-laugh moments.

As Mario continues to explore Port Prisma’s island and brings color back to the world, he discovers several reasons to use his hammer for less artistic means: smashing fools over the head. Those who played Paper Mario: Sticker Star will already be intimately familiar with Color Splash’s combat system. However, Mario now collects cards instead of stickers, which allow him to jump on his enemies’ heads, hammer foes into each other, or even summon friendly minions into battle.

Mario’s attacks are as diverse as his foes, some of whom evade ground attacks or can’t be jumped on. I enjoyed the simple strategies of powering up my cards by painting them, and figuring out the right cards to use in each battle so I never exhausted my deck. Some players might be turned off by the fact that Mario’s attacks are a finite resource, but I found it easy to acquire new cards by painting the environment, and the few times I did run out of attack cards during a battle, I easily got a random new one for a paltry 10 coins.

Though the combat is fun, I miss the RPG mechanics from earlier Paper Mario games. Color Splash never has you sorting through an inventory or managing character stats. Since Mario also doesn’t gain experience in battle, the only meaningful combat rewards are collectable hammers that increase your paint reserves, allowing you to paint more objects in the environment. The lack of character growth made combat feel more simplistic, and I felt aimless with few far-reaching character goals.

This lack of growth means battles can feel superfluous. More than once, I was tempted to run from combat. However, most random encounters are over quickly, so this isn’t a big problem. I also found it easy to avoid battles by dodging onscreen enemies, and Mario can instantly destroy weaker foes, which allowed me to skip some battles entirely.

The one thing in Color Splash that I never skipped was the dialogue, which is consistently funny. Each level has Mario embarking on a new comical adventure that lets players explore everything from resort beaches to giant-filled forests. I laughed heartily as Mario helped a group of ghosts throw a tea party. I giggled immaturely as Mario assisted a superheroic Toad in finding his underpants. I cackled maniacally as Mario laid waste to an entire army of Shy Guys with a star during a Coliseum battle royale. These memorable moments are scattered throughout, and easily make this one of the funniest Mario games to date.

Color Splash’s RPG elements might be paper thin, but fans of the series won’t be disappointed with this latest adventure. While the game’s combat isn’t much deeper than Mario’s paper-thin body, this plumber’s antics and colorful world are worth the price of admission.

8.25
About Game Informer's review system
Concept
Paper Mario is back on consoles, but this entry follows in the footsteps of its 3DS predecessor Sticker Star
Graphics
Color Splash’s papercraft world is a visual treat. Every inch of these environments looks as if they tumbled out of an art supply store
Sound
The soundtrack is loaded with sunny tunes and lighthearted sound effects. If you’ve ever played a Mario game before you can probably imagine what Color Splash sounds like
Playability
The battle system is easy to learn, but all of Mario’s attacks are based on a limited supply of attack cards, which might turn off traditionalists
Entertainment
Charming characters and zany events fill the world, which is good because you traverse the same locales multiple times
Replay
Moderate 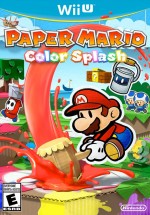