Cleaning Up The Environment Has Never Been So Fun
by Jeff Marchiafava on Oct 18, 2011 at 11:25 AM
Publisher: Sony Interactive Entertainment
Developer: HandCircus
Release: October 18, 2011
Rating: Everyone
Reviewed on: PlayStation 3 Even among family-friendly titles, few games try to espouse a positive message nowadays. Not Okabu. From the humorous opening animation to the countless tasks you'll undertake with your trusty cloud whales, Okabu's call for environmental conservation rings loud and clear. Luckily, entertaining gameplay and a cutesy presentation that even the grumpiest players can't help but smile at make it an altruistic lesson worth learning.

Okabu tells the story of Kumulo and Nimbe, two cloud whales who are at odds with the diabolical Doza Corporation due to their unbridled pollution. A thick layer of smog causes the mystical creatures to plummet from the sky and land in a quaint village of the Yorubo, who face even bigger environmental problems. Their water is contaminated, oil puddles stain their dirt roads, and random Doza bots roam the countryside spewing noxious gas clouds into the air. After listening to the village elder recount their plight, it's time for the whales to roll up their...cloud sleeves...and get to work.

And there is plenty of work to be done. Aside from scouring the environment for collectible fruit and hidden eggs, the cloud whales (who have the same abilities and can be controlled on the same screen in drop-in/drop-out co-op) can suck up water from ponds and sprinkle it on malnourished plants or shoot jets at the intruding machines to short out their circuit boards. You'll also give rides to friendly allies, each of whom sports a different ability. An old man named Monkfish can use his trusty rope and plunger to drag around objects, flip switches, and free captured tribesmen, while Picolo plays tunes to charm wildlife into doing your bidding, such as making a ram-happy goat break down obstructions and demolish waterproof enemies. These simple tasks may sound boring to adult gamers, but Okabu sports an undeniable charm, and tasks are over too quickly to become annoying. In fact, most of the game is free of frustration: getting shot down by an enemy Doza brings no penalty other than having to pick up your passenger again, and the puzzles are so straightforward that even children won't be stumped by them. Instead, the game challenges players with ever-growing chains of objectives, requiring you to think half a dozen steps in advance. I use the term "challenge" loosely, however.

Kumulo and Nimbe's journey is a surprisingly long one. I thought the adventure was over once I breached the Doza compound and freed the enslaved natives, only to find out that was just the first of four worlds. New worlds introduce more characters, and with them new gameplay mechanics and puzzle elements. Extra collectibles and time challenges provide more challenge, though whether they're worth going after depends on how much of a completionist you are.

Despite feeling like I wasn't in the target audience, I had a lot of fun playing through Okabu's colorful worlds, and found myself grinning like an idiot at its absurdly upbeat characters and activities. For parents who are looking for a wholesome game to play with their children, Okabu is a no-brainer. Even without a kid for a sidekick, Okabu's light-hearted romp is worth a look for gamers wanting a break from more serious and demanding titles. 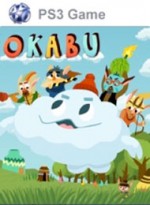 Entertaining gameplay and a cutesy presentation that even the grumpiest players can't help but smile at make Okabu's altruistic lesson worth learning.

Purchase More Info
8
i
Game Informer's Review System
Concept Create a simple action game about cleaning up the environment that's fun for children and adults alike
Graphics Even for a downloadable game, the cartoony visuals won't win any awards, but everything is adorable
Sound A lively and eccentric soundtrack complements the humorous gibberish the characters speak
Playability Who knew a cloud whale could be so responsive?
Entertainment There's plenty of light-hearted amusement to be had, but if you're looking for a challenge, look elsewhere
Replay Moderate