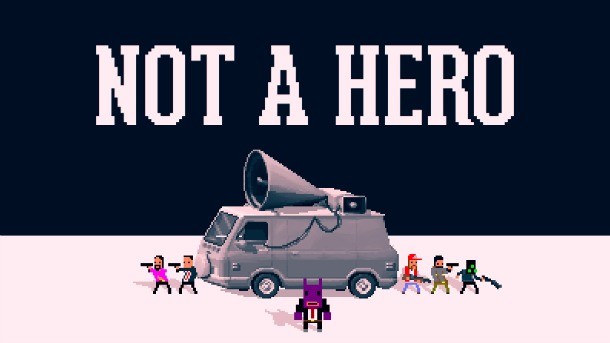 Roll7, the developer of the recent indie skateboarding game OlliOlli, has announced its next project. Not a Hero is a cover-based shooter that is played in a unique perspective.

Not a Hero is powered by ISO-Slant, a proprietary technology that Role7has partnered with, which lets developers display a perspective between 2D and 2.5D with minimal effort, according to Roll7. An example of this can be seen below.

The story centers on Steve, who has offered his skills with a gun to an anthropomorphic rabbit named BunnyLord who is running for mayor, and needs someone to clean up the streets. Steve needs clear five districts of crime, and will recruit new heroes has he goes.

Not a Hero release for PC, Mac, and Linux through Steam. It is also coming to next-gen consoles in Fall 2014. It can be played at Rezzed today through March 30 in Birmingham, England. Additionally, Roll7 is bringing Not a Hero to PAX East in Boston April 11-13.

It was recently revealed that Roll7's previous game OlliOlli would be coming to the PlayStation 3 and PS4. You can find our review of the Vita version here.