Previously shown at E3 2011 as Battle Mii, the shooter-focused Nintendo Land attraction has since morphed into a full-blown Metroid homage. This exclusive trailer focuses on the Deep Space Shootout mode which pits on-foot players against a player flying Samus' spaceship.

The Miis running around on the ground use a Wii Remote and nunchuck to gun down the flying spacecraft, while the vessel's pilot uses a GamePad to steer and shoot using the controller's motion technology. The attraction supports up to five players and is easily one of Nintendo Land's funnest destinations demoed so far.

Be sure to check out our exclusive trailer for Nintendo Land's Balloon Fight-inspired attraction.

Click on the banner below to enter our Wii U coverage hub, which will be updated throughout the month with many more videos and previews. 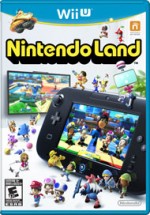