When Tecmo released Ninja Gaiden in 2004, you would think Team Ninja would have needed a break from ninjas after the notoriously long development process. Instead, the team continued to update and re-release the game in the form of Hurricane Packs, Ninja Gaiden Black, and Ninja Gaiden Sigma. Just in case we haven’t played the game enough times, it’s back once again in portable form. Whether this latest iteration of Ryu’s 3D debut is worth playing again depends on how much you already enjoy the series.

Gamers who only played the original release will welcome the tweaked camera and bonus Rachel stages, but even the adjusted camera from Black can be problematic. It’s not the only feature clearly showing its age. Platforming is wildly inaccurate; I missed jumps just as often as I made them. Enemies respawn as you double back on rooms, which isn’t a problem with lower-level enemies but can be frustrating as you progress further in the game.

Like the rest of the launch titles, Tecmo made a few new alterations to take advantage of the Vita’s unique hardware. Players can tap the screen to go into first-person mode and then move the handheld around to survey the environment. It’s a nice feature, but I found myself accidentally tapping the edge of the screen as I used the analog sticks, unintentionally sending me into first-person mode in the middle of swordfights. One added feature, the ability to complete tiny minigames with the rear touchpad to enhance your Ninpo attacks, feels forced.

Gamers who had a hard time with the original game’s difficulty should find the new Hero mode more to their liking, as it enables auto guard and evasion assist once your health is low. In addition, it grants the player infinite Ninpo attacks, which should be enough to clear almost any area of enemies.

Other than a couple Vita-specific features, an easier difficulty level, and a collection of trial missions, Ninja Gaiden Sigma Plus doesn’t offer anything new. If you loved the original game enough to play through its numerous updates, then you may enjoy taking this new version on the go. However, action fans accustomed to the polished games of this generation may become frustrated with the eight year-old mechanics. 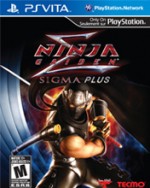 Other than a couple Vita-specific features, an easier difficulty level,
and a collection of trial missions, Ninja Gaiden Sigma Plus is the same game that has been re-released ad nauseum for eight years.

Purchase More Info
7
i
Game Informer's Review System
Concept Re-release 2004’s Ninja Gaiden. Again.
Graphics Sigma’s HD visuals are better than the Xbox original but not as impressive as other Vita launch offerings
Sound Wailing guitars and clashing of swords…basically exactly what you’d expect
Playability Combat is still rewarding and deep, but the camera and platforming can be problematic
Entertainment Ninja Gaiden is still a solid game, but its age is showing
Replay Moderate