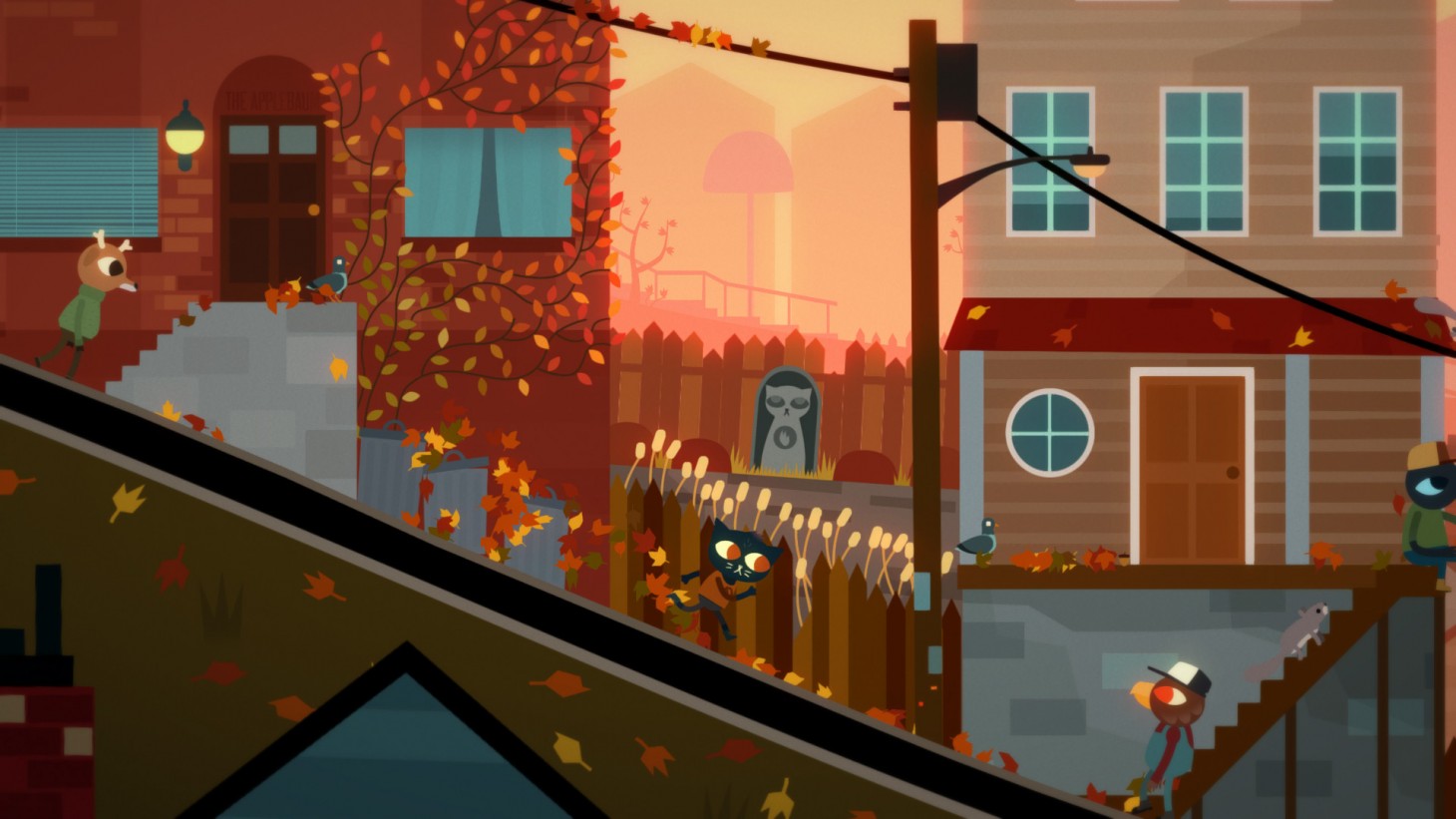 Night In The Woods Review

Night in the Woods is about mistakes, recklessness, and friendship, all wrapped up in a colorful adventure game. You play as Mae, a 20-year-old anthropomorphic cat who drops out of college and returns to her hometown. With an emphasis on self-discovery, rebuilding old relationships, and understanding the struggles of a dead-end town, Night in the Woods is an enthralling experience that captures both the wonder of childhood and the dread of adulthood.

This narrative-driven adventure draws players in by allowing them to explore the town of Possum Springs and reconnect with Mae’s past. Upon her return, she begins to notice ominous happenings that tie into the ghostly folklore of the town, and soon her and a group of friends set out to find the truth. This tale unfolds gradually as players establish a daily in-game routine – interacting with friends, venturing into town, causing trouble – but Night in the Woods rewards your patience as it gradually brings the threads together.

Although the story is slow-paced, Night in the Woods shines in its smaller moments. Mae scribbles doodles in her notebook after certain events, which can be dark or hilarious. Making dubious decisions to let off steam, like breaking things with a baseball bat or knife-dueling your best friend, is childishly amusing in its recklessness. The plot also taps into complicated subject matter delicately, from dealing with issues of depression to a gay couple expressing frustration at being the only openly LGBTQ people in a small town. Ranging from heavy to irreverent, the way Night in the Woods handles a broad array of interesting situations is among its best qualities.

Mae is particularly memorable because she is deeply flawed and complex. I chuckled often at her cynical wit, became endeared by her morbid back-and-forth jokes with her best friend Gregg, and related to her insecurities as she gives herself a pep talk in the mirror before heading to a party. While it may seem like she’s pumping the brakes on her future by dropping out of college, her reasons for doing so become apparent as the story progresses.

The natural, funny dialogue and characters’ evolution are more ways Night in the Woods sets itself apart. You notice subtle changes with the townsfolk from one day to the next, and hanging out with friends over time has them open up to you. Chatting online with friends uses just the right amount of abbreviations, and has a realistic flow. Dialogue options bring interactivity to conversations, but the choices mainly impact who you hang out with and which scenarios you witness.

A number of simple-but-amusing minigames pop up through the story. Some of these include a rhythm game that occurs during band practice and shooting pierogis into a friend’s mouth with careful aiming. The rhythm game in particular has a Guitar Hero feel to it, which turns out to be fun and challenging as you attempt to hit the right notes in a timely manner. These quirky diversions add a degree of novelty and immersion, but aren’t challenging enough to interrupt your progress.

Mae has bizarre out-of-body experiences through her dreams, which focus on exploration. In most of these dreamscapes, you platform your way through shadowy parts of town, searching for four different musicians to complete a puzzle. These are never difficult to complete, but are breathtakingly atmospheric as an eclipsed moon hangs above, and apartment windows glow in the nighttime.

Talking to all the characters on a daily basis and revisiting locations can be tedious, but it’s often rewarding once you get there. I enjoyed listening to my neighbor’s short and strange poems, and looking for stars with a teacher on a rooftop as he explains the mythos behind different constellations in the sky. By overhearing conversations, I better understand the dismal economy of a town that no longer prospers as it did years ago, and how this affects its working-class townsfolk.

Night in the Woods is a strange tale with an even stranger cast of characters, but it revels in its oddities. The excellent writing pulls off a realistic sense of cynicism, childlike wonder, and comradery between friends. With its careful balance between adult themes and youth, it captures a stage of life that is confusing, frightening, and thrilling. The sluggish pacing can drag, but players fill the time by building friendships and understanding the grim secrets of a town they once again call home. 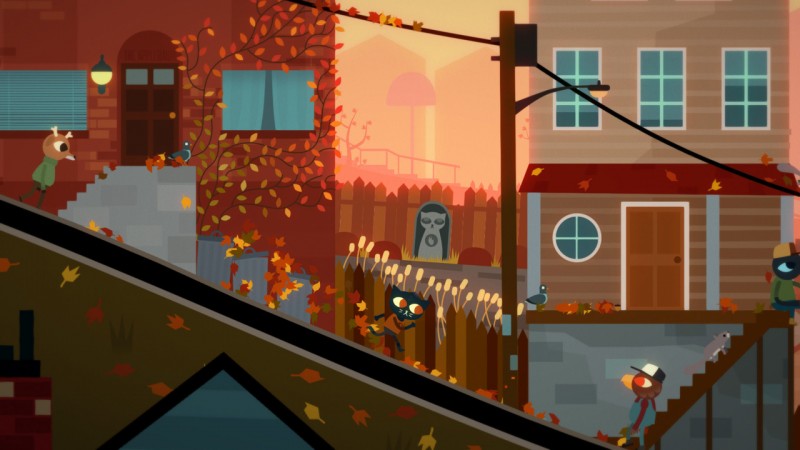 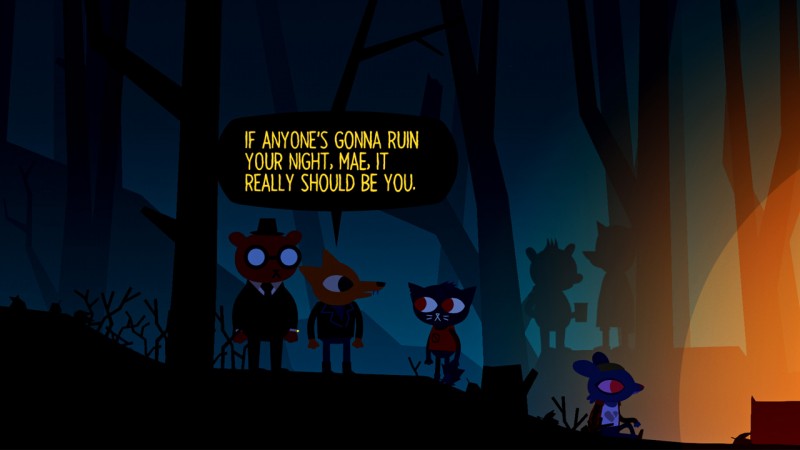 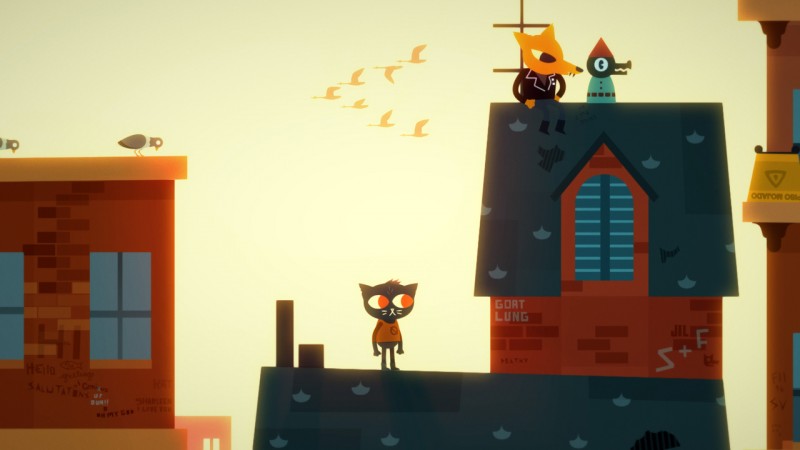 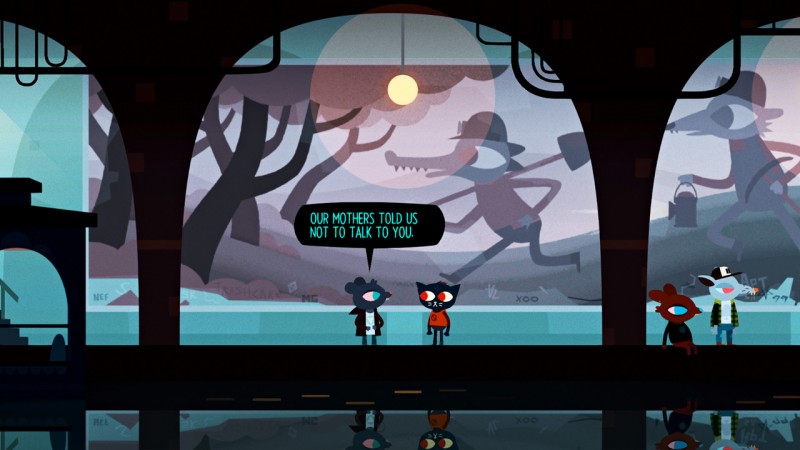 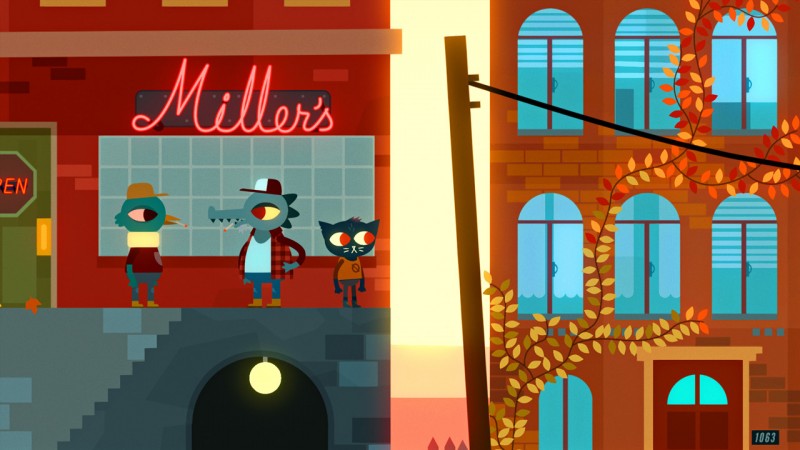 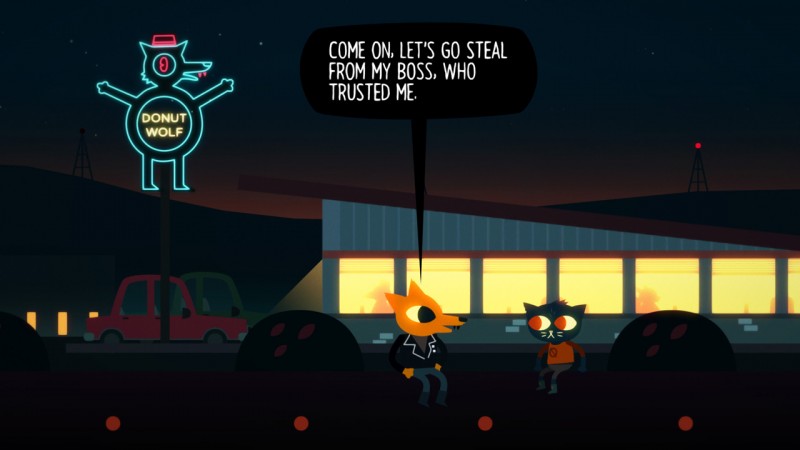 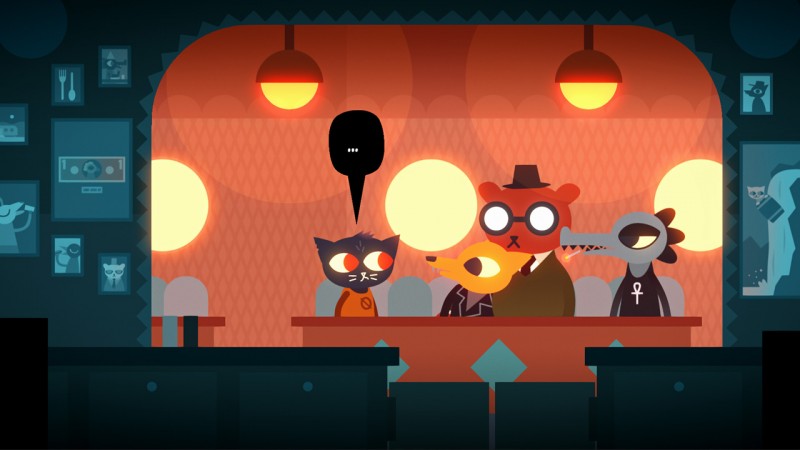 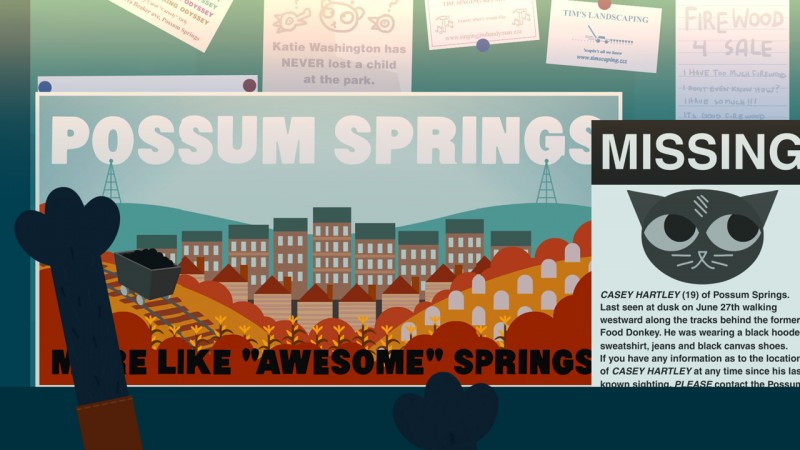 8.75
About Game Informer's review system
Concept
Play as a cat named Mae who returns to her hometown and attempts to solve strange happenings
Graphics
Stylish and simple, the visuals make for a colorful, cartoonish world
Sound
A mellow, charming soundtrack accentuates the tone of each vibrant environment
Playability
Controlling Mae feels smooth and easy as you interact with objects and characters, and jump during light platforming sequences
Entertainment
Natural, clever dialogue is the most compelling aspect, mixing black humor, charm, and profound observations
Replay
Moderately high