At the end of each match the Nidhogg, a creature with roots in Norse mythology appears to devour the winner. It’s a strange way to celebrate victory, but it’s appropriate for Nidhogg’s atypical multiplayer structure and gameplay. At first glance, the game doesn’t look like it belongs in the fighting genre, but it hits the same competitive beats of a typical fighting game albeit from a different direction and with a different set of rules.

The concept of Nidhogg is easy to understand. You must make your way to the opposite end of the screen, taking out the other player who repeatedly respawns in front of you each time you defeat them. If you get taken out, then your competitor gets a chance to move to the opposite end of his or her screen and you respawn in front of them. The first to reach the edge of the screen wins.

The back and forth nature of the combat means matches can last a long time, with dozens of exciting moments. Skirmishes can play out like elongated choreographed Hollywood swordfights, or last as long as it takes to jump over someone and throw a sword in their back. The chance to recover is as ever-present as the opportunity to overtake, lending every battle a level of intensity I rarely feel in other fighting games.

When encountering another fighter, each player takes up a fencing pose. You have a lunge button and a jump button, but everything else is handled with the directional keys or control stick (I highly recommend plugging in a controller). You can roll and duck to dodge middle and high lunges, or meet your opponent’s attack with your sword positioned at the same level. All it takes is a touch from an opponents’ sword to meet your death, so precision is key. Moving your sword slightly higher than your opponent’s as he or she moves in for a lunge attack can be the difference between a quick death and the opportunity to make a break for the finish line. Pushing your sword upwards at the right moment into an opponent’s sword can disarm them, but all it takes is a quick roll away from the action to retrieve your weapon. You can also throw your sword in desperation, but it can be easily swatted out the air if your enemy anticipates the move.

The tight swordplay is the only reason to play Nidhogg. You won’t find a story, or complex multiplayer modes. The single-player mode is a timed sprint against a collection of multi-colored A.I. competitors across four levels.

The four levels repeat quickly, but each one changes how you approach skirmishes.  The high grass of the Wilds make it difficult to see where your opponent’s sword is, while the tight hallways of the Mines mean you can forget about trying to throw your sword. The options are few, but each is different enough to offer entirely distinct battles.

Local multiplayer consists of combat where players can play on opposite ends of the keyboard with the option to set up a tournament bracket. Online multiplayer is a one-on-one affair, with the option to change some interesting match variants like lowering the gravity or making thrown swords return like boomerangs. Some variants are more straightforward, like adding time limits, while others, like the ability to remove divekicks, feel like they exist purely for the hell of it. The best way to play is the traditional one-on-one versus mode, which is the best balanced of the bunch. In my experience, the online play ran smoothly, with the only hurdle being a slight waits to find competitors, which at its worst took about five minutes.

Every other aspect of Nidhogg takes a backseat to the swordplay. The character designs are essentially colored pixelated silhouettes, and the fantastic soundtrack only has four songs.

Nidhogg is well-honed, mechanical gameplay stripped down to its core. The combat is fun, but I wish Messhof applied the same striving for perfection to the presentation and game modes as it did to the swordplay. 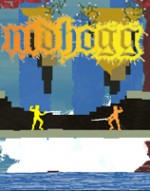 Nidhogg doesn’t look like it belongs in the fighting genre, but it hits the same
competitive beats of a typical fighter, but from a different
direction and set of rules.

Purchase More Info
7.5
i
Game Informer's Review System
Concept After playing thousands of games featuring swords, this might be the first where they feel appropriately fatal. The result is an intense back and forth tug of war of fearful lunges and hopeful stabs
Graphics The pixelated art direction is adopted by many independent developers, but it doesn’t offer a distinct look
Sound The tracks are disappointingly few, but what’s here is fantastic and elevates the game to an impressive level of intensity
Playability Throwing a sword at full sprint, rolling on the ground to pick up a discarded sword on the floor, and jumping into the air for flying kick directed at your opponent feels smooth and responsive
Entertainment Pleasure from the single-player is derived entirely from your appreciation of time-based speed running. Multiplayer is where the game fulfills its potential
Replay Moderate