Game one of the Stanley Cup playoffs. The Minnesota Wild is visiting the Shark Tank, and the San Jose crowd is downright hostile. While the fans bang against the glass and wave their towels in confident support of their favored team, the puck drops and the Sharks scramble to keep up with my first line. After three minutes under an aggressive forecheck, a tired Sharks skater gets frustrated, slashing my star rookie defenseman, who collapses in pain on the ice. This will not stand. I grab the assailant and pound him into oblivion via the new first-person fighting engine, much to the chagrin of his teammates. From here it gets ugly. After three periods, six goals, three more fights, and two injuries, no one is a winner but the fans. With the crowd on its feet giving the Sharks the energy to pull out the overtime victory, I steal game one with a shorthanded goal. The crowd falls silent, but I’m standing up pumping my fist for winning the war of attrition. Welcome to NHL 10.

While one-timers and screaming slap shots from the point make the highlight reels on SportsCenter, true rink rats know that hockey games are won in the corners. NHL 10’s dedication to the little things starts with the new board play, which allows players to pin opponents against the boards so teammates can dig the puck out. This addition makes aggressive forechecking a viable strategy for the first time in the series, allowing you to dump the puck behind the goal line and move the possession battle from the neutral zone deep into the opposing team’s end. Other subtle, yet effective, gameplay changes include more loose pucks in front of the net, unpredictable bounces off the boards, and a greater emphasis on defensive positioning, all of which result in a gameplay style that realistically mimics the NHL. The only strategy NHL 10 mishandles is the breakouts, which suffer from too many skaters standing still.

Last year, the Be A Pro and EASHL modes debuted to critical acclaim. Both return with minor alterations, the most popular sure to be monthly seasons in the online hockey league. EA instead placed the majority of its effort into rebuilding NHL’s franchise mode, now dubbed Be A GM mode. The centerpiece of the improvements is an RPG-style system that awards you experience points for meeting the expectations of the ownership, whether that be scouting eastern European defenders, signing a free agent, or clearing cap space with a trade. Accumulated points can be used to improve your scouting, medical staff, and coaching staff. While this system adds a needed layer of achievement to the experience, many of the requested moves seem arbitrary. Why would I clear cap space when I’m $9 million under already?

The trade interface is vastly improved, with a versatile hub that allows you to place players on a trade block, keep track of trade rumors, and adjust sliders to indicate which draft picks, positions, and player ages you are interested in dishing and receiving. Consequently, trades are more prominent throughout your season, as your phone rings with offers from the NHL Draft right up to the frenzy of activity at the trade deadline. Free agency, on the other hand, is a mess. Teams often dump first round draft picks before they ever sign contracts, too many skilled players are left unsigned, and you cannot edit your lines during the offseason to see where your roster holes still exist.

While the franchise mode has its faults, it’s still vastly improved over last year’s offering. Coupled with the other outstanding modes and the most polished gameplay in the sports genre, NHL 10 is still more than worth the price of admission.

9.25
About Game Informer's review system
Concept
Add board play and other hockey subtleties to improve the best sports game on the planet
Graphics
New crowd animations bring playoff intensity to tight games
Sound
The stellar commentating from Gary Thorne and Bill Clement bring back memories of ESPN’s National Hockey Night
Playability
New play styles offer everything from arcade-style play to hardcore realism
Entertainment
With Be A Pro, Be A GM, and the EASHL mode, NHL 10 offers myriad ways to feed your puck passion
Replay
High 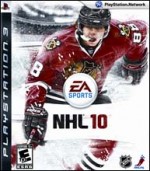