Let me start this off with a message to the Miami Dolphins: Believe it or not, you're not the only team that's toiled in futility and totally embarrassed yourselves on the football field this year. I thought that in retooling the NFL Street series into NFL Tour EA would actually be improving the franchise and learning from its past mistakes in the sub-genre. Unfortunately, I was mistaken, as NFL Tour represents a total regression – one that the company says is aimed at young kids and football novices who don't play Madden. Even if I take this at face value, it's clear that this game is a failure no matter how you try and qualify it.

EA should be ashamed that it's trying to bilk some kid out of $50 while offering so little in return. I can understand simplifying the controller in an otherwise button-heavy sport, but that doesn't mean the gameplay itself has to become uninspiring and so lacking. NFL Tour's version of Gamebreakers only occur on defense, and gone is the showboating and over-the-top moves that would make plays possibly exciting. The best Tour does on this front is offer counter moves to break or perform tackles. Also, if you're going to simplify the gameplay this much, I think you need to offset that with bells and whistles like unlockables, an intriguing career structure, football cards, or whatever to offer people something off the field. And if you want to go easy on kids, cleaning up the blatant catch-up AI and unresponsive controls is a good way to get into their – or anyone's – good graces.

Given how badly this reinvention of NFL Street has gone, I'd ask for an overhaul of NFL Tour, but who knows what we'd end up with then. 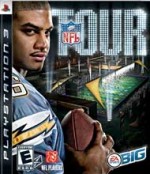 NFL Tour
Purchase More Info
5
i
Game Informer's Review System
Concept Gut the NFL Street franchise and set it on fire like an abandoned car on the roadside
Graphics You'll recognize a number of pro players by their likenesses
Sound Perhaps here is where Hollywood's writer's strike has hit the hardest, because Trey Wingo's lines are brutal
Playability I strongly suggest you switch to the classic passing mode. Tour passing only confuses
Entertainment It's like watching the 2007 Dolphins...as a Dolphins fan
Replay Low