After playing through New Super Mario Bros. 2 on 3DS a few months ago, I was concerned that the “New” series had run its course. The levels didn’t feel as fresh and the coin collection gimmick didn’t make much of an impact. I feared this dip in quality signaled stormy skies for New Super Mario Bros. U on Nintendo’s next home console, but I couldn’t have been more wrong.

Right out of the gate you can’t help but notice the new high-definition visuals. Everything is so clean and bright now. Nintendo didn’t just settle for up-rezzing old assets (though plenty of that still happened); the artists went wild with imaginative background imagery and the koopalings’ airships are loaded with little details. A particularly gorgeous stage was clearly inspired by Vincent van Gogh’s painting “The Starry Night.”

New enemies and themes are constantly popping up, and each only appears once or twice. A massive sea snake chases you all throughout a water level and never shows up again. The same goes for rare classic enemies like the stomping Sumo Bros, who haven’t surfaced since Super Mario World. All of these factors keep things fresh as you progress through the main game.

Boss battles are all familiar faces from the Koopaling crew, but their new powers allow for fresh and clever battles. A special clash at the halfway point stands out from the rest, and the thrilling final boss is one of the best in the entire Mario series.

The now-standard lineup of Mario, Luigi, and two generic Toads offer the same undeniable raw multiplayer fun. At any given moment, your friends and family seesaw from greatest ally to worst enemy. Playing this game in silence is impossible; constant cries of pain and glory mean that you probably don’t want to pop this in if someone in the house/apartment/dorm has to get up early in the morning.

The new twist this time around adds in a fifth player for boost mode. This person watches everything play out on the GamePad screen and can tap to add platforms, stun enemies, and destroy projectiles. It strikes a great balance of luring in players who aren’t confident in their platforming skills while still giving them a satisfying job to do. After some practice, a skilled boost player can rescue the bros from certain doom and help them get hidden star coins. If characters jump on the boost platforms a certain number of times in a row, the boost player can earn a purple star that grants the ability to kill onscreen enemies with a tap. It feels even more empowering than the traditional invincibility speed run. Boost players also have the power to be just as evil as the rest of the onscreen characters (if not more) by blocking jumps with platforms, so they really are included in every way.

Standard power-ups return, like the fire flowers, ice flowers, and mini mushrooms. The new super acorns stuff Mario into a flying squirrel costume that allows him to glide, cling to walls briefly, and perform a slight jump boost in mid-air. Players accustomed to the raccoon tail or cape from previous games will need to practice to make the most of the suit, but it becomes a handy tool in the arsenal. I only wish that it featured some kind of attack like the raccoon tail whip.

Some rare power-ups appear, and they add a unique flavor to the stages they’re used in. A special version of the acorn grants infinite fly time and can only be obtained by catching Nabbit. Players must chase this new rabbit thief who occasionally appears in completed levels. Upon catching him, they are rewarded with the special P-Acorn that only lasts a single level. This mechanic works similarly to the treasure chest chases in Rayman Origins, but you can easily bypass any challenge by equipping star power before starting ­the ­stage.

Yoshis appear for a handful of levels and work the same as they did in the Wii prequel. Baby Yoshis return from a lengthy hiatus, and add interesting twists to a few stages. One inflates to enhance your jump, another shoots bubbles from its mouth to trap foes, and a third lights up dark cave stages and stuns enemies. They never grow to full size no matter how much you feed them, but they give you a 1-up if you keep them alive until the end of the stage.

Outside of the main quest, you can tinker with a few alternate modes. Coin rush returns from the previous Wii game in which players compete to collect the most. Challenges put your skill to the test with speed runs, coin collection, boost mode team up tests, and more. Trying to perfect these is tempting, but without any in-game rewards or an online leaderboard to gauge your skills against others, it’s just not worth it. The same issue exists with the Boost Rush Mode that tasks you with beating levels that auto-scroll at different speeds based on how many coins you have.

I’d much rather spend time searching out hidden stages and collecting star coins in order to unlock the special content that appears after beating the game. I won’t spoil what it is, but it will keep old-school Mario fans playing long after Princess Peach is safe and sound.

While couch co-op is great, it's still disappointing that Nintendo didn't include online multiplayer on Mario's Wii U debut. You can turn on Miiverse functionality to see other players' brief messages or drawings tied to specific stages on the world map, however. It's possible to open your settings to the whole world, but I enjoyed limiting these messages to just friends and people I follow. It's pretty cool to see your buddies' thoughts on a particularly tough stage or bragging if they beat it without taking damage. As I said in the main review, it's disappointing that none of these features appear to be in the Challenge or Boost Rush modes. 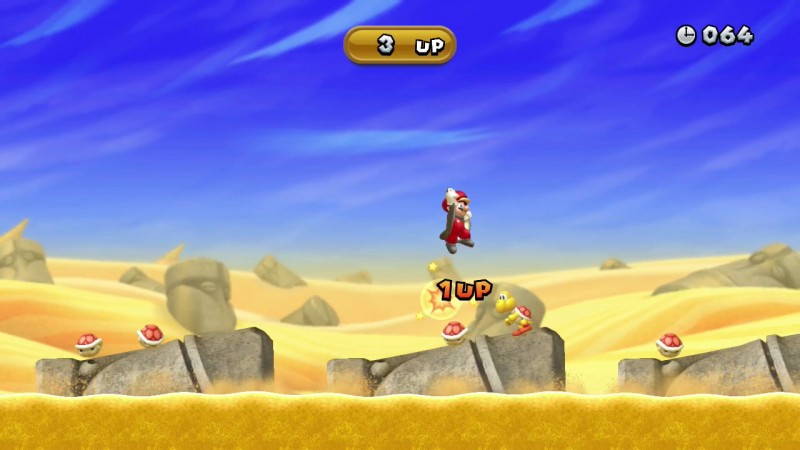 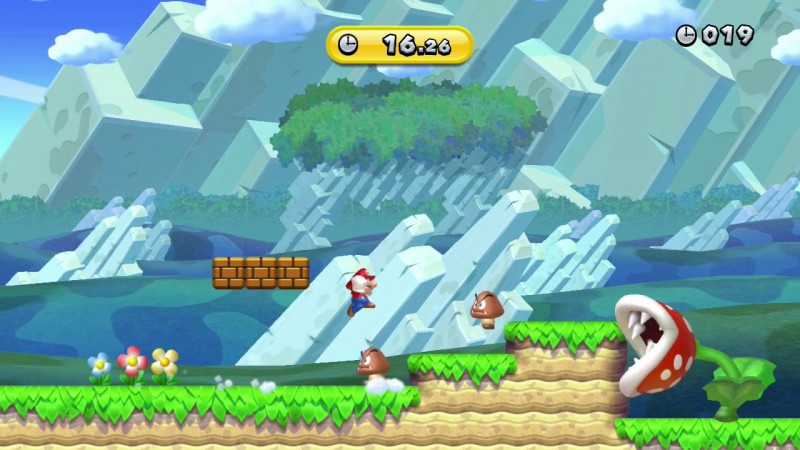 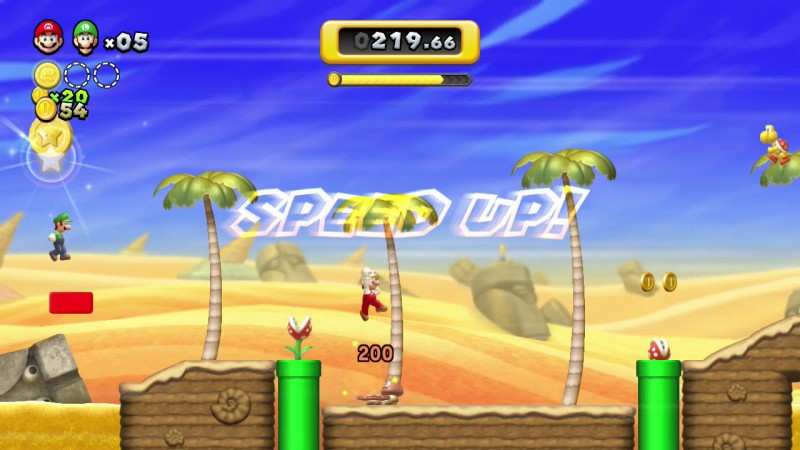 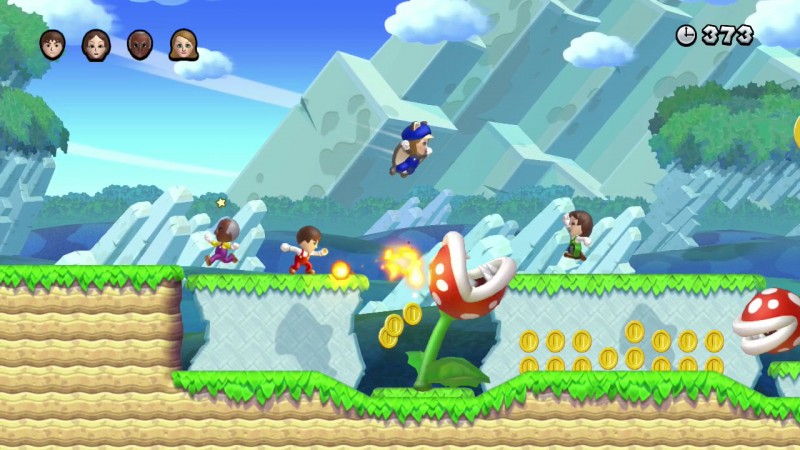 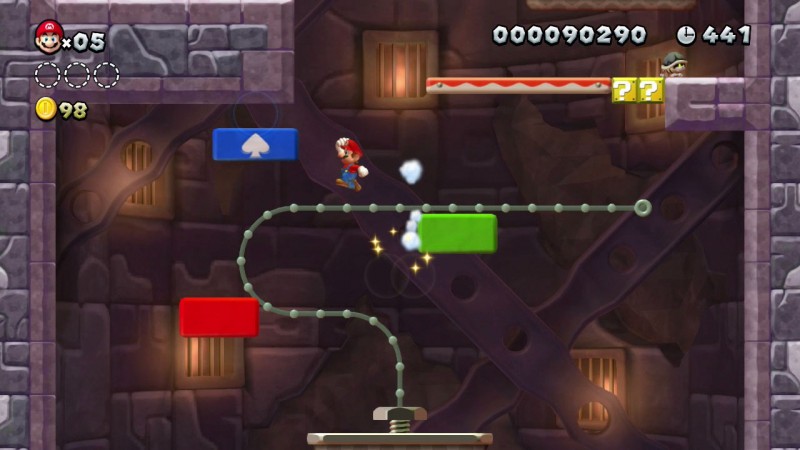 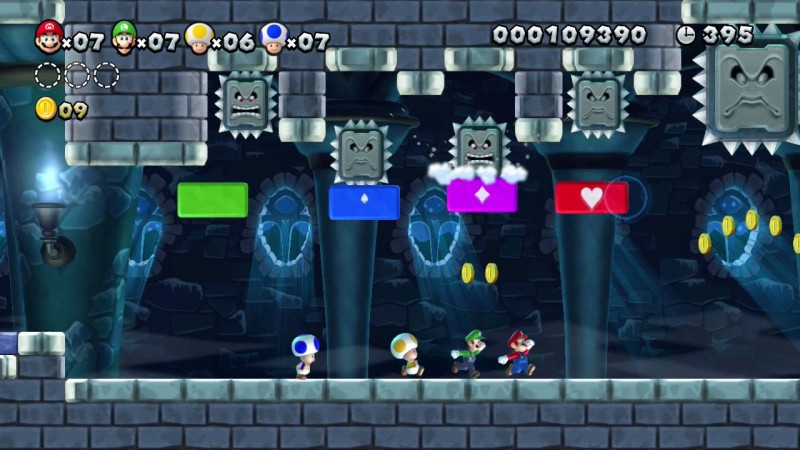 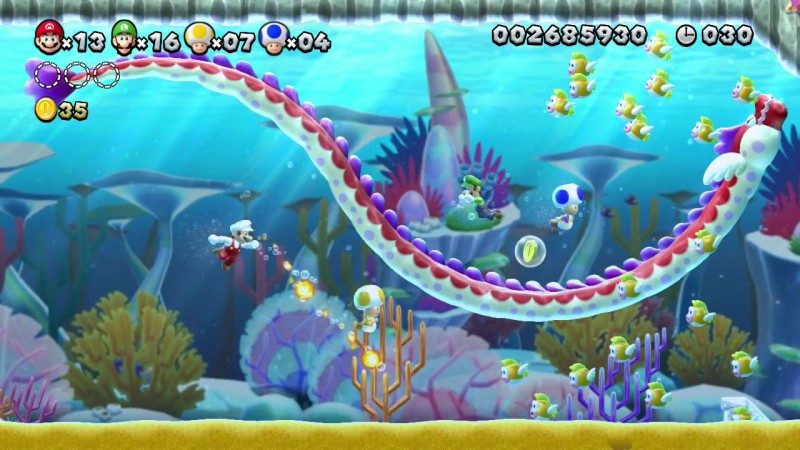 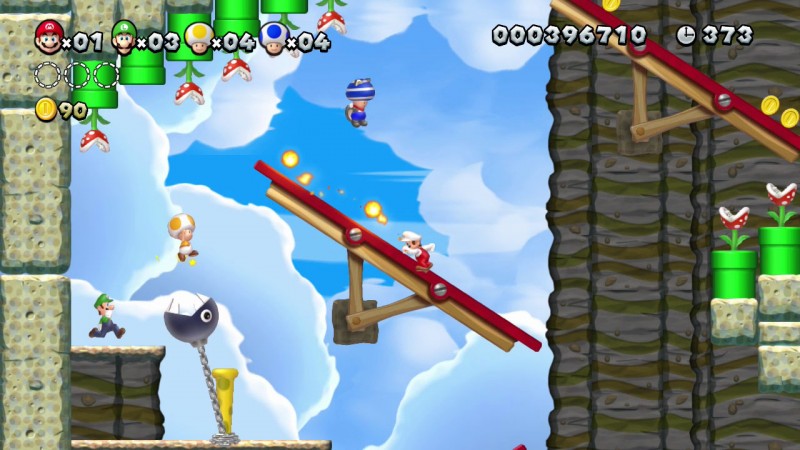 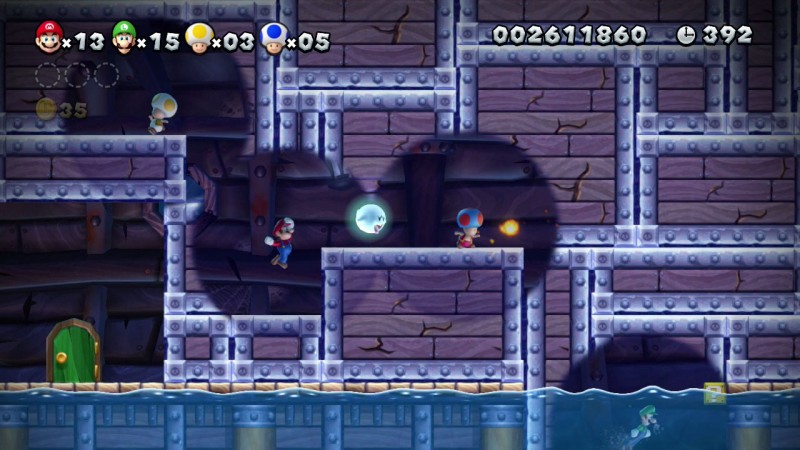 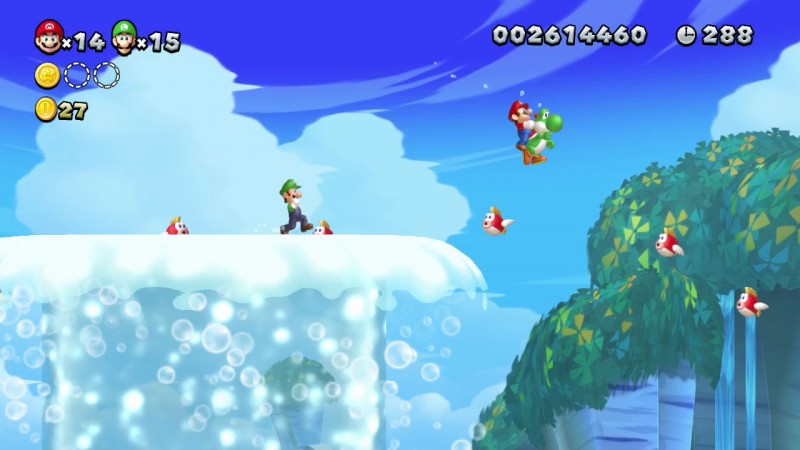 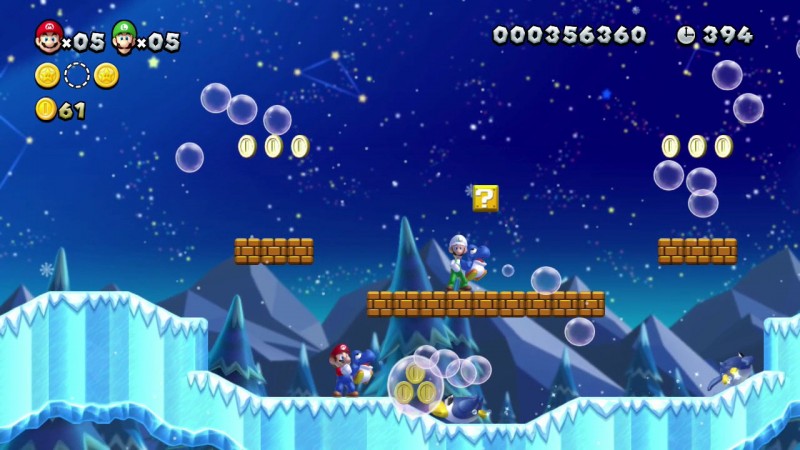 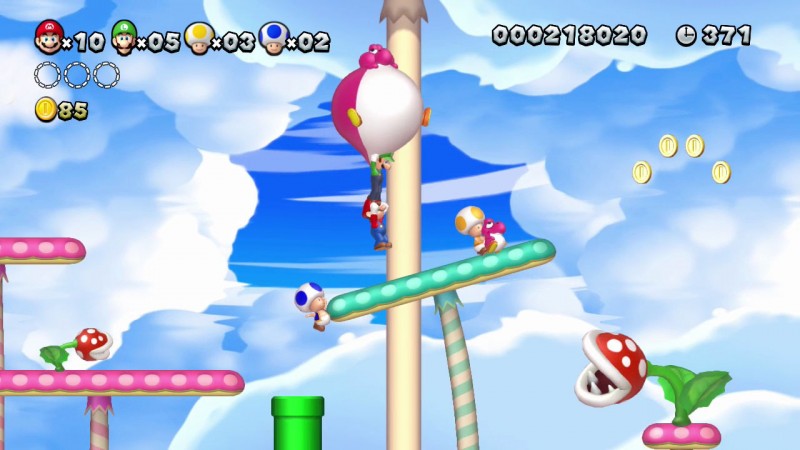 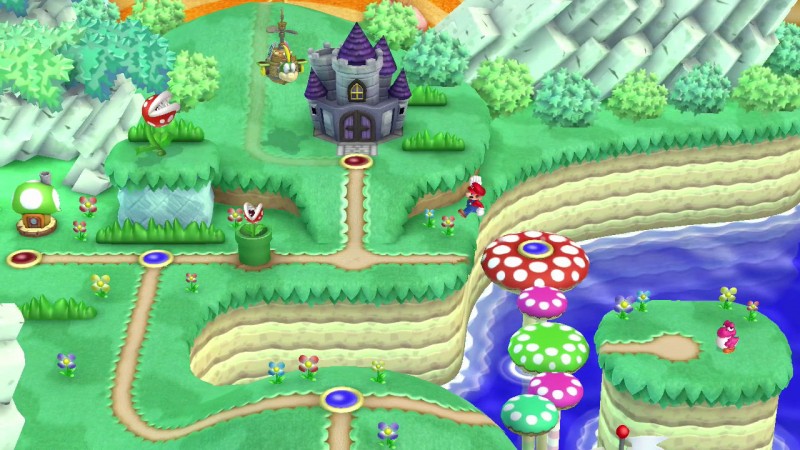 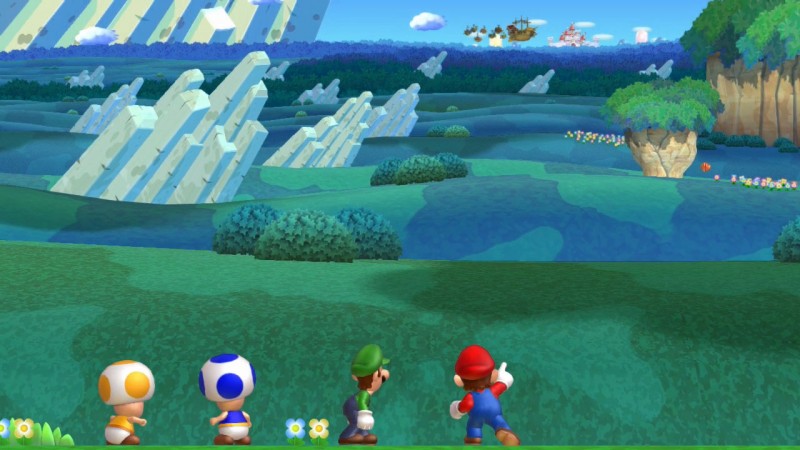 9.25
About Game Informer's review system
Concept
Add a fun new element to already great couch co-op and more bite-sized challenges
Graphics
HD visuals at last! Everything looks gorgeous
Sound
Even though the Wii U supports 5.1 surround sound, Nintendo purposely chose to only offer two-channel stereo sound
Playability
Sideways Wii remotes are as tight as always and the GamePad is solid. Beware: Pro controllers are not supported
Entertainment
Some of the most creative NSMB levels Nintendo has created, incorporating new and classic elements alike and rarely repeating standout enemies and themes
Replay
Moderately High 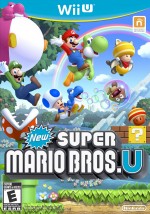