For many of you, the headline sums up all you need to know about this re-release of Pikmin. Having played the original, you know that the cute visuals hide a clever variation on traditional strategy games. You also know that Miyamoto and company know how to craft levels, so that there's a constant sense of adventure and discovery as you play.  Finally, you remember that for all its strengths, the original Pikmin was also challenging to control. It's here that Nintendo targeted all its energy for the Wii version, with mostly positive results.

Let's back up. Not everyone has played the original Pikmin, so some explanations are in order. Players adopt the role of Captain Olimar, an enterprising space explorer who crash-lands on a strange planet, scattering his ship parts across the forest. His only hope lies in some friendly indigenous life, the pikmin are half animal/half plant creatures that obey his every command. Using them to confront dangerous creatures, knock down obstacles, and haul his ship parts, Olimar has 30 days to reconstruct his ship and return home.

At any time, you're directing and controlling dozens of the little pikmin, and an onscreen cursor now allows for far more flexibility and ease of use when throwing them to a task. The change makes it much easier to target enemies, even as you move, and it's hard to imagine going back to the old way. In contrast to the dramatically improved throwing and targeting, directing pikmin who aren't on a task is oddly more difficult. Where the second analog stick of the GameCube controller allowed for an elegant way to maneuver your followers, the new method is far clumsier, involving a shift button and precise cursor manipulation.

Little else has changed about the game, so expectations on the visuals should be kept in check. I'd love to see improvements to the pikmin pathfinding; I shouldn't have to tell my reds not to drown themselves in the lake, or my blues to not wildly wander off nearby cliffs. However, Nintendo's goals with this game appear more modest, and they are largely accomplished. If better controls for an eight-year old game meet your equally modest goals, you should find little that disappoints.

8
About Game Informer's review system
Concept
Guide multi-colored walking onions on a quest to find missing spaceship parts
Graphics
This game came out eight years ago. Set your expectations accordingly
Sound
A charming musical score, but it'd be nice to have more variety as the in-game days pass
Playability
The new control scheme dramatically improves some mechanics, and is a little worse than the original in other areas
Entertainment
A simple but engrossing strategy title wears its age well, but even a new control scheme can't make it feel like new
Replay
Moderate 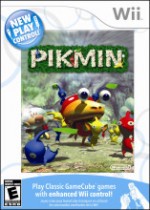