Arriving out of left field with a release on the same day as its announcement, NES Remix is a mishmash of short segments from numerous games. Some are bonafide classics, like Super Mario Bros. or The Legend of Zelda. Others are more forgettable or haven’t aged gracefully, like Clu Clu Land and Wrecking Crew. Regardless of which subset of levels you’re playing, NES Remix offers numerous challenges that don’t add up to anything particularly notable.

Unlike the clever 9-Volt levels in the WarioWare series, you’ll rarely see interesting twists on these classics. Many objectives are as simple as “Get the sword!” in Zelda or “Enter a pipe!” in Super Mario Bros. As you progress, a series of remixed levels do turn things around a bit. One Mario level borrows the silhouetted art style of Limbo, one tasks you with navigating the first Donkey Kong level with the grounded Link (he can’t use his sword, either), and another has you taking on Bowser in a modified frozen castle.

Even the levels with actual modifications feel recycled, as the core gameplay never really changes from what you remember on NES. Excitebike feels like Excitebike, even if you’re being required to take out five rival racers. Balloon Fight is still Balloon Fight when the camera zooms out a bit. There are few genuinely clever moments in NES Remix, and I rarely felt compelled to return to completed levels in an effort to get a higher rating on the game’s three star system.

One thing NES Remix does a good job of is presenting bite-sized snippets of memorable moments from the classics. I may not want to play through the entire original Zelda again, but it was cool to hop in and take on a few bosses. Some Mario levels will give you that feeling of dread when you approach Bowser, but you won’t have to dedicate four stages’ worth of time to get that hit of nostalgia.

NES Remix is a fun little distraction for a while, and brings back plenty of memories. Some of those memories are great, and others are along the lines of remembering how much Ice Climbers sucks. This isn’t a must-play highlight for the Wii U eShop, but it’s worth spending some time with if you grew up with an NES controller in your hand.

6.5
About Game Informer's review system
Concept
Throw a ton of NES moments at the wall and see what sticks
Graphics
These NES titles look exactly how you remember
Sound
Have you heard the theme songs to Mario or Zelda? Well, you’ll hear them plenty here
Playability
Not being able to use the pro controller is confusing, but the GamePad functions fine
Entertainment
Could be fun for nostalgia buffs, but don’t expect any innovation
Replay
Moderate 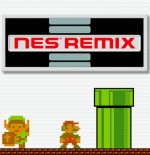