As gamers, a certain portion of our brain responds positively when we hear a game is going to be more realistic – particularly in racing games, where this can signal gains in the physics models, replication of the real-life tracks, and the car specs. But going down this road has as many liabilities as it does benefits. Up until now, aiming for more realism in your driving game has led to games that are challenging because of their simulation of what happens when velocity, tire grip, and physics collide. Nothing is wrong with sim-based racers, but Need for Speed: Shift ends up plying the same trade as the Forzas and Gran Turismos before it, and not necessarily to dramatically better results.

Shift’s Driver Profile is one area where the game plots its own course. You are given points during races for either driving aggressively or skillfully. The former includes blocking opponents from passing or sliding through corners, while the latter is for hitting the correct racing line or mastering a corner. You earn points in either category, and it’s not like you’re forced in one direction or another. As such, your Driver Profile serves as little more than a glorified progress indicator that comes with its own medals. I’m all for the bells and whistles – as inconsequential as they might be – but I don’t think that the Driver Profile adds much, even in the intangibles category. Furthermore, I wish the game didn’t splash Driver Profile graphics all over my screen when I’m trying to race, especially since the HUD itself is poorly done. I consistently had trouble reading the map, and an even harder time finding out which place I was in.

Shift’s career structure and driving thankfully serve as better anchors than the Driver Profile. New race types and locations open up freely thanks to the game’s star system (which opens new racing tiers as you collect more stars), and the five career tiers give you plenty of options from which to choose. Shift’s driver duels (particularly online) are the only highlight among the race types, but we can all be thankful that the racing itself is strong enough to carry the game. The cars’ power, strengths, and weaknesses are apparent, and Shift offers plenty of challenge. The game’s very forgiving damage system belies the driving realism, but who am I kidding? I like to cross the finish line above all else.

This game goes from zero-to-60 fast enough, but that only brings it upon the question of “now what?” that much more quickly. I don’t want to say that being a sim-racer is a dead end, but it’s hard to know where the Shift branch of Need for Speed can go from here. 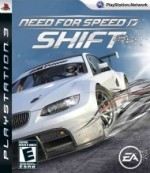 Need for Speed: Shift
8
i
Game Informer's Review System
Concept The Need for Speed series goes more sim, and ends up going down the same one-way street
Graphics When you crash the screen goes hazy and grey for a few seconds to simulate your disorientation
Sound Nothing you haven’t heard from every racing game going up and down the street
Playability I really didn’t like the HUD, from the race map to the Driver Profile updates that splash up on the screen
Entertainment This game gets you revved up pretty easy, but you won’t redline
Replay Moderately High