When EA split off the Need for Speed franchises into different streams, with Nitro being the more fun, arcadey title as opposed to Shift’s more realistic focus, it made sense. I didn’t agree with the decision, but at a minimum I could see how it might imbue the series with a clear focus that it seemed to have lost in recent years – albeit in two seperate titles. Given that mandate, I expected Nitro to come out screaming with a vengeance, but this is far from the distilled essence of NFS’s cops-and-cars.

Need for Speed: Nitro takes place on a series of confined tracks. Not only will you repeatedly visit them throughout the game, but the lack of freedom they give you makes battling the cops no fun at all. In fact, not having freeform cop chases seems like an anathema to the series. Furthermore, a scant two kinds of power-ups (one for repairing your car and the other to sic the cops on other racers) don’t do much to invigorate the moment-to-moment racing. The car customization features (which carry over into your graphics being imposed upon the tracks as you race) also aren’t anything to hang your hat on.

The game’s bronze, silver, and gold cups take you to the same five cities through the game, so the variety comes more in the race types such as elimination (last place car is knocked out per lap), drift challenge, drag racing, time attack, circuit, and speed trap. The latter was perhaps the most interesting, as you have to carry as much speed as you can through certain sections of the track in order to clock the highest total speeds. Drifting was also fun, and doing it in all types of races is beneficial since it gets you an extra star towards your career progression.

Make no mistake about it: Need for Speed: Nitro’s competitive advantage shouldn’t be the motion controls – it should be the series’ penchant for arcade racing, supercharged cop chases, and edge-of-your-seat racing. Unfortunately It doesn’t even come close to delivering on these fronts. But, by all means, have some motion controls.

6.5
About Game Informer's review system
Concept
The presence of cop cars chasing you is about the only thing of note here. Otherwise, it fails to stand out in the racing department
Graphics
The race graphics that stream along the environments from the lead car don’t lend as much character as I would have liked
Sound
The wave of licensed sounds and car audio is nothing to get your engine revving
Playability
The game accepts several different control schemes, but as is usually the case with Wii titles, the motion-only controls aren’t the best. I’d go with the full nunchuk setup
Entertainment
Drifting through the corners is one of the few fun things this game has to offer. Otherwise, the staid racing does not live up to the Need for Speed moniker
Replay
Moderately Low 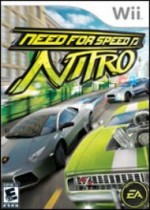