Forget that another studio already made a game called Need for Speed: Most Wanted this console generation. Police aside, this game isn’t about any one franchise in particular. It’s about developer Criterion’s ruthless pursuit of its racing vision. With spectacular Burnout-style crashes, the police from 2011’s Hot Pursuit, and the ease of getting new races via Autolog, Most Wanted is a well-sculpted, honed racing machine that delivers an exhilarating experience.

The open world of Fairhaven is a fertile ground for the Criterion racing concepts of accessibility, freedom, and motor mayhem. Freedom and structure delicately intersect in a loose career mode based around beating a list of 10 Most Wanted cars. Unlike most games out there, these races unfurl in a subtle way. Jump in a car and do whatever you want, and the game tracks it and suggests objectives via Autolog (including the feats of your online friends). You’re always free to hop to the next ride.

The career-building race events are actually tied to each car. You can race any of the 100-plus cars you find in the world, but to upgrade each one you have to complete an event that’s tied to a specific car upgrade. Once your car is stacked and you earn enough Speed Points (which you accrue by doing things like near misses, drifts, etc.), you can take out the next Most Wanted car. I enjoyed the freedom this setup provides, since there was more than one way to pursue the same goal.

Cars are simultaneously coveted and disposable. It’s great to find them in the world and pride yourself on beating/earning the high-prestige cars on the Most Wanted list, and yet tearing them up in high-speed wrecks and launching them off jumps (safe landing or not) brought a smile to my face. This dichotomy can lead to doubt, since you’re free to upgrade and use any car in the Most Wanted races, and not all upgrades are clearly advantageous in all situations. Sometimes it’s better to have higher top speed than acceleration, so you want to make sure you have the right car to compete. The ubiquity of cars also cuts down on their eminence and your drive to upgrade all of them.

The cops rear their heads appropriately throughout the game, and are neither too powerful or pushovers. My favorite use of them is when they show up during a scripted moment in an upgrade or Most Wanted race and you have to continue to evade them after the event is over as the action spills out into the open world. For reasons I can’t fathom, however, there are no police chases in multiplayer.

Regardless, Most Wanted has a hearty multiplayer spread, offering normal races and special challenges based around specific locations on the map (such as everyone getting a certain amount of air off a jump). Like other aspects of the game, the online mode blends freedom with structure. Cooperation and competition can be intertwined. For instance, you gain Speed Points for crashing other cars – even during a team race – and some races let you negate competitors’ scores by taking them out.

Sometimes while playing Most Wanted I was confused what to do next due to the sheer volume of opportunities. I was even frustrated at times when seemingly out of nowhere, a civilian car clogged up the last turn of a particularly high-tension race, causing me to eat metal instead of grabbing victory. But part of the beauty of this game is that there is no such thing as an unfair ending. Whether you’re dominating your opponents or barrel rolling your way through a race, you’re getting what you wanted – a game, that win or lose, goes all out getting there.

Check out our Test Chamber for the game 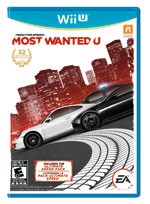 This game is all about developer Criterion’s ruthless pursuit of its racing vision.

Purchase More Info
9
i
Game Informer's Review System
Concept Combine Criterion’s Burnout Paradise with the traditional cops from the Most Wanted series
Graphics A lot is going on at any given moment, and things like medians can sometimes be hard to pick out. The damage, crashes, and overall vibe are great
Sound If you pay attention to the police chatter, you can tell what they’re going to do
Playability The cars are fast and loose, and the rubber-banding is a necessary evil that helps make races intense
Entertainment This game makes everything you do fun and feels like the way racing games should be
Replay High