Taking the reins from longtime-NFS specialists Black Box, Burnout creator Criterion brings its love of fast cars and intense action to EA’s iconic racing franchise. Hot Pursuit’s most ambitious feature is twin career modes that give players a chance to become either the most notorious racer or renowned cop in Seacrest County. Progression is entirely in your hands, as you can dynamically switch from racer to cop as desired, allowing you to strike a balance between donning the badge and defying it. This keeps the game fresh due to diverse events, weapons, and cars exclusive to each campaign.

Renegade racers test their grit in traditional races, duels, time trials, and previews of hot new cars. Cop missions switch between rapid response calls, tracking down racers in interceptor mode, and test-driving new vehicles in the police fleet. Both campaigns feature Hot Pursuit mode, in which you have access to offensive weapons and defensive equipment to use against the lawless racers or law enforcers. Both cops and racers can deploy spike strips and EMPs. For special abilities, racers have access to a turbo boost and radar jammers, and cops can radio in a support helicopter or police roadblocks. These tools add strategy to each race and make Hot Pursuit, as one would expect, the standout mode in Criterion’s Need for Speed debut.

Evolution is constant in Need for Speed Hot Pursuit; the sense of progression is pivotal in pushing you though more difficult missions. Ranking up unlocks new events and vehicles or upgrades to your equipment and weapons. Even if you don’t place, racers and cops are still rewarded bounty for reaching driving milestones and for drifting, drafting, near misses, and more. As a result, I never felt my time on the asphalt was wasted.

The further your career progresses, the more punishing it becomes. As a racer, cops get increasingly aggressive with EMPs and spike strips, and often tag team and flank you. As a cop, racers become more erratic and unpredictable, hitting the e-brake and abruptly changing directions, or scrambling your radar and escaping off-road under the veil of night. Thankfully, the difficulty increase never feels unfair. Need for Speed doesn’t fall victim to rubber-banding and other problems that consistently plague the genre. My placement was always tied to my skill level rather than blind luck. The AI is intelligent, never drafting too long behind you to avoid a blown out tire when you employ a spike strip, and even falling back to let you crash through a roadblock and follow in your wake. Even ambient traffic is realistically unpredictable; some drivers stick to the course when you barrel into oncoming traffic, while others panic, hitting their brakes and spinning out into your path.

Long after you’ve bested the campaigns, Hot Pursuit’s impressive Autolog feature will have you revisiting Seacrest frequently. The seamlessly integrated system facilitates intense and constant competition, updating you when friends have bested your times. A simple pull of the trigger launches you into an event to attempt to reclaim your ranking. I fell into a habit of surveying my standings immediately upon logging in and addressing any challenges before returning to my single-player aspirations.

Though Hot Pursuit impresses, minor annoyances appear from time to time. Camera cutaways show the epic crash caused by your driving prowess, but sometimes cut back to the road at a high speed with your car aimed directly at a median. Sometimes direct hits to a competing car don’t seem to register damage, which is especially frustrating when getting in close proximity to the vehicle is a mission in and of itself.

While I wished the single-player campaign featured more combat-intensive Hot Pursuit missions, multiplayer thankfully sates this hunger. You can indulge in traditional races and one-on-one interceptor missions, but the eight-player Hot Pursuit races are the star mode, many of which devolve into utter madness.

To say that Criterion has successfully taken over the Need For Speed series and reinvigorated it with a modern take on the Hot Pursuit formula is an understatement. Fans of white-knuckle racing games, both online and off, will find immense satisfaction on the roads of Seacrest County.

8.75
About Game Informer's review system
Concept
Gain notoriety as Seacrest County’s Most Wanted or Ultimate Enforcer
Graphics
The striking levels are diverse, although some recycling occurs. They derive longevity from varying weather conditions and times of day. The cars aren’t bad either
Sound
A quality track list that sours with too much repetition
Playability
An impressive stable of cars means everyone will find the perfect fit
Entertainment
Sim specialists and arcade enthusiasts will find merit in Hot Pursuit’s array of cars, mission types, and multiplayer modes
Replay
High 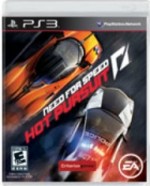