EA Sports' Ultimate Team mode is finally coming to NCAA, and thankfully your deck won't be filled with QB #6 and HB #23, but with real-life football players.

In the Ultimate Team mode, you get a starter pack of player cards with which you play real games with in order to earn coins to buy more packs. By buying packs and competing in auctions to win specific player cards, you build up your roster with better and better players to compete against others online.

The NCAA franchise as a whole is unable to feature real college players (hence the anonymous player numbers that are used), but NCAA 14's Ultimate Team mode has found a way around this and features real-life football players. Using its existing NFLPA license, developer EA Tiburon is creating Ultimate Team cards for all active NFL players on their college teams – that's over 1,400 players at the game's launch. It's like the worlds biggest college all-star alumni game featuring everybody from current NFL players like Russell Wilson to former college greats not currently in the pros such as Andre Ware. There is also a multitude of guys in between – those whom you may recognize because they were your school's campus heroes even though they haven't made it big in the NFL.

Following the mode's card-collecting philosophy, there will be multiple versions of some players if they've transferred schools in their college career, played multiple positions, or different cards for a player's junior and senior seasons. Like the Ultimate Team mode in other games, NCAA 14 will also encourage collecting as many cards as you can with bonuses for getting all the cards in a particular collection set, such as all the Heisman Trophy winners, for example. EA says that it hopes to ultimately have over 2,500 player cards in the mode.

You can play games by either taking on solo, offline challenges (perhaps based on events such as a top game in the current season, a bowl game last year, etc.) as well as online via Head-to-Head Seasons. This mode, started by the FIFA soccer franchise, creates 10-game seasons and eight tiered divisions of play. You start out at the bottom division and work you way up via promotion while trying to avoid getting knocked down a division through relegation. NCAA 14 adds a four-round playoff structure that requires you to win at least five games in order to qualify (eight victories gets you a first round bye).

Unlike some of the other Ultimate Team modes in EA Sports titles, NCAA 14's version does not feature chemistry between players, coaches, mobile/browser support, or consumable cards related to stat increases. There will, however, be customary "contract" extensions that let you continue to use a card and unspecified player items (no mention of whether these are earned or will cost money) that can be used to help out your team. The coin cost for different levels of card packs and any info on EA Tickets (which can be bought with real money and put towards card packs) has not been revealed yet.

NCAA 14's version of Ultimate Team doesn't feature all the bells and whistles the mode has enjoyed in other EA Sports titles, but college football fans should find no problem getting excited about this addictive mode.

For more on NCAA 14, check out this preview on the game's gameplay and this one on its presentation.

Note: The original version of this preview mentioned 2,500+ players in the mode. EA Sports has since clarified that the mode will have over 1,400 players at launch, and that 2,500+ is the goal going forward. The text has been modified to reflect this distinction. 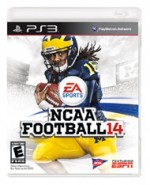