They say success on the football field starts with the running game. With all the crazy multi-receiver and option formations in college football these days, this isn’t necessarily as true, but it’s a philosophy that NCAA Football 11 uses to great effect. The new locomotion running engine gives the game a powerful foundation, and it drives the franchise forward by offering a fluid experience every time you touch the ball. It’s one of the key components that takes this series to the next level.

The locomotion engine’s fluidity and realism transfer to the animations you see out of the ball carrier and the defenders tackling him as well. Instead of seeing a player pop in and out of specific right analog moves like in NCAA 10, such as a running back jumping hard left or right on a juke, movements in NCAA 11 are more precise. A player will gather his body, plant his feet, shift his weight, and then start accelerating again. It’s not all just a pretty-looking sequence, either. You can combo moves better than in NCAA 10, and you don’t even have to use the right analog special moves to reap the benefits of the new engine. Using just the left analog stick feels nice and smooth, and I feel like I can make small cuts and adjustments to follow my blockers and find daylight without having to sacrifice control, jack the right analog, or have an obvious running lane.

Offensive line blocking receives a boost thanks to reworked double-teams and edge blocking on sweeps – which you can now see diagrammed before the snap. That being said, it’s not perfect, and you’ll still see some boneheaded blockers miss their assignments. The most glaring mistake happens when backs try to step up and block on pass plays. This is hard to do when they just stand in your quarterback’s lap. These little annoyances (and some from year’s past – like magnet catches and canned interception animations) keep the game from being perfect, but they aren’t enough to spoil my enjoyment of the game as a whole.

NCAA’s dynasty recruiting is another area of the game that makes a big leap forward while still retaining some of its old flaws. Being able to do it all on your browser is a huge plus, and the improved feedback recruits offer lets you know exactly where your program and pitches stand in relation to the competition. That said, there’s no getting away from the fact that recruiting is still a grind, and if you want to get blue chippers you have to be willing to put the time in (or pay up the recruiting microtransactions). Despite these improvements, it’s confusing when you are awarded the same number of points for topics in which the recruit had differing levels of interest.

NCAA has its flaws, but with improved on-the-field action, recruiting, and presentation (including the option to generate custom stories on your Dynasty), for the first time in years I feel like I’m getting the college experience. I know what it feels like to be a man among boys when dodging tackles, shrugging off players, and breaking for the end zone. Saturday is no longer just a diversion before the pros take the field on Sunday. It’s a time to build dynasties, crush the competition, and bask in the glow of millions. 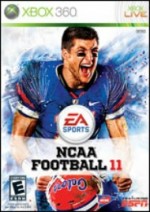 The latest installment in the perennial EA college football franchise is the best yet. Read on to find out what makes this year so special.

Purchase More Info
9
i
Game Informer's Review System
Concept After several years of being a good but not great franchise, NCAA Football 11 emerges
Graphics The new lighting makes a big difference. Last year’s players almost look like a bunch of cartoon characters running around in comparison
Sound I’d like more situation-specific audio, as some of the commentary sounds out of place at times
Playability The smoothness of the locomotion engine makes running and finding holes effective even with just the left stick
Entertainment The improved presentation might leap out at you, but it’s the on-the-field action that puts on the real show
Replay Moderately High