A lot of things make college football unique. The fans, the rivalries, the dynasties, the big plays - NCAA tries to encapsulate all of these aspects. At times it syncs nicely with what happens on a Saturday afternoon, but in other areas the game doesn't quite embody the sport. NCAA 10 is a jigsaw puzzle with all the pieces accounted for, but they aren't always in the right places.

The drama of the college game isn't captured by the lack of bowl-specific presentation or the newly skinned Road to Glory mode, which has highlights of your created player's career complete with Erin Andrews video segments, but it is very much present in the gameplay. Over-the-shoulder bombs, jump balls, and shoelace tipped ball interceptions now pepper your games with oohs and aahhhs thanks to improved QB precision passing and the QB throwing ducks as he's being tackled. You'll even squirm in your seat when the controller vibrates as you're about to get sacked.

The interior running game may still be a little jumpy or automatic in its animations, and you see the occasional ball morph right through a player, but overall the game has done a better job than previous years in blending its animations. This makes magnet catches less obvious, and sequences such as bump-and-run coverage, sideline catches, and rushing the QB (now with defensive moves on the right analog) more fluid and natural looking.

The chess game of coaching strategy is also mixed in NCAA. I found the counter recruiting, in-game gameplanning, defensive player targeting, and linked plays yielded nebulous results, but I enjoyed the QB quizzes to regain composure and being able to make the call to risk playing slightly hurt players or sitting them on the bench. As hard as it can be to track the effectiveness of the in-game gameplanning (where you can set aggression levels for your players), it's better that it's more vague than a pure ­one-to-one correlation.

The power of college football dynasties is represented throughout NCAA 10, and you can build your own via online dynasties, the Season Showdown, and TeamBuilder modes to name a few. It's nice to get collectable points for playing CPU and human opponents in Season Showdown, but I was especially impressed with the TeamBuilder. I easily spent an hour (and could have spent an hour longer) creating my team with the online browser, and was impressed with the uniform options and control over the roster. You can write in your own names and even customize each player's skills. Creating an overall play-style for the team trickles down to what kind of individual players the computer generates for you.

While NCAA is certainly a game with its hits and misses, I come away from it more excited than in previous years. The features are there, and I'm glad that the on-the-field play is making strides forward and that it captures the excitement of a college football program that isn't dominant, but which is more than capable of thrilling its fans. 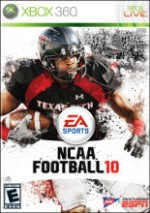 NCAA Football 10
8.5
i
Game Informer's Review System
Concept The TeamBuilder is the big feature here, but some small additions take the gameplay a step forward
Graphics Player models are essentially the same, but the animations are blended better to make the game smoother overall
Sound Somebody needs to stuff Lee Corso's mouth with a sweaty jock
Playability QB precision passing makes a huge difference from last year
Entertainment NCAA 10 is more fun to play than 09, but not all the effort that went into the game – like Road to Glory mode – pays off
Replay High