This Student Athlete Fails To Learn From Past Mistakes
by Matt Bertz on Nov 20, 2009 at 07:19 AM
Publisher: EA Sports
Developer: EA Canada
Release: November 16, 2009
Rating: Everyone
Reviewed on: Xbox 360
Also on: PlayStation 3 With amateur athletes playing for the love of the game, yearly David and Goliath upsets, and the lack of unmotivated professionals content sitting on the bench and collecting their undeserved millions, many fans consider the NCAA Basketball Tournament the purest sporting competition. In the video game space, however, the NBA’s collegiate counterpart is treated like an afterthought, with inferior gameplay and a dearth of gameplay modes. While NCAA Basketball 10 does its best to curb this trend with sharpened strategy on the court, gamers with hoop dreams of a hardcourt experience on par with the depth of NBA games will have to wait a few more semesters.

The biggest boon to NCAA Basketball 10 is the new motion offense system. At the tap of a button, your players will send a makeshift offense into motion, executing off-ball screens, posting under the hoop, spotting up for threes, and cutting to the basket based off eight authentic motion offense systems that are mainstays at the college level. Pair this with the easy to execute pick and roll system and suddenly even gamers with a rudimentary understanding of basketball fundamentals can run effective offenses on the fly.

Outside of the motion offense, NCAA Basketball 10 plays much like its NBA counterpart, for better and for worse. Players move fluidly across the court and control well on the whole, but legacy issues like clipping animations, poor sideline negotiation, awkward lay-up moves along the baseline that result in shots off the back of the backboard, and way too many CPU offensive rebounds still plague the gameplay. The worst carryover from NBA Live 10 is the locked animations, which keep you from making that split-second pass when you press the button.

The popular Dynasty mode yet again returns with no online support, a disappointment considering NCAA Football has had the feature for two years now. On the plus side, the addition of a well-produced CBS-hosted preseason special and tournament selection show give the menu-driven off-court experience some much needed ornamentation. The points-based recruiting system returns as well, though NCAA Football fans should note that the point distribution works differently. In the football game your recruitment points renew each week, giving you a deep look at potential scholarship players. In NCAA Basketball 10, you need to make your point allotment last for the season, which means you rarely get good recruiting information on more than a select few players.

Despite the myriad lawsuits directed at EA Sports regarding player likeness, the EA Locker returns, allowing users to customize rosters to their liking. But on the flip side, the announcers no longer use players’ last names when calling games. Like the other EA Sports titles, NCAA Basketball 10 also supports dynamic updates, but since the company cannot explicitly recreate college players’ statistics, the hamstrung updates solely consist of team stats and fresh poll rankings.

With the improved presentation and lively college crowds, a couple pieces are in place to make NCAA Basketball 10 a destination hoops experience. If EA adds more game modes and rids itself of the legacy gameplay problems, perhaps a future class can rival the thrill of the NCAA Tournament. 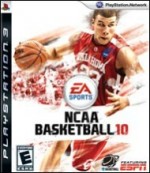 If EA adds more game modes and rids itself of the legacy gameplay
problems, perhaps a future class can rival the thrill of the NCAA
Tournament.