Arcade Basketball Returns To The Hardcourt
by Matt Bertz on May 12, 2017 at 11:38 AM
Publisher: Mad Dog
Developer: Saber Interactive
Release: May 9, 2017
Rating: Everyone
Reviewed on: PlayStation 4
Also on: Xbox One, Switch, PC The NBA 2K series may be the uncontested king of simulation basketball video games, but throughout history there has always been room on the court for an arcade experience to thrive as well. Games like Arch Rivals, NBA Jam, and NBA Street distilled the sport to its purest strain of fun, ditching zone schemes and triangle offenses in favor of action-oriented dunks, steals, dishes, and treys. With EA sleeping on the NBA Jam series this generation, the door opened for a new contender to emerge, NBA Playgrounds.

Developer Saber Interactive has never made a sports game before, but NBA Playgrounds doesn’t show many signs of being a rookie. The colorful, big-head art style and over-the-top hardcourt action both feel familiar, as if the series has been with us all along. That perception has a lot to do with how liberally it borrows from its predecessors, primarily NBA Jam and NBA Street. In two-on-two matches with modern and legendary NBA players, players perform absurd, gravity-defying dunks while commentators crack groan-worthy jokes – and your best bet for stopping on opponent’s run is to shove them off the ball.

The game controls much like NBA Jam with a few subtle tweaks. To counter stealing or shoving attempts, you can use the right analog stick to perform crossover dribbles, and a stamina bar keeps players from spamming shoves. The shot meter is the trickiest element to master in NBA Playgrounds. Releasing the ball at the peak of your jump shot is easy enough to understand, and timing your shot perfectly earns you a bonus point. However, understanding when you should release the button is harder while executing the many cartoonish dunks and layups, which results in many missed attempts. Another minor-but-persistent annoyance is the prolonged pause that occurs before inbounding the ball after a basket; you sometimes must wait several seconds for the opposing team to get back into position before resuming play.

NBA Playgrounds’ largest deviation from established arcade basketball norms comes with its Lottery Pick meter. As you perform dunks, alley-oops, and steals, this meter charges up to unleash incredible power-ups. These include a prolonged speed boost, electric shot that will sink regardless of your form, a sped-up shot clock for your opponent, and a hot zone on the court that lets you double a number of points you get from scoring a basket. These power-ups create an additional layer of strategy to the proceedings. If your opponent gets an electric shot power-up, your best bet for countering is wasting some of your own Lottery Pick meter by shoving the opponent before they get the shot off. The hot zones are great for when you are down multiple baskets, but can also be a crippling tide-changer that guarantees a loss if your opponent gets one toward the end of a tight game. I lost multiple games in this fashion, and this betrayal of the competitive balance is a step too far.

NBA Playgrounds offers only a few modes: four-player local exhibitions, six four-game tournaments against AI duos, and a severely limited online multiplayer. You can burn through the tournaments in a couple hours, and the lack of a way to connect and play with friends online is a major disappointment. Saber knows this paltry offering needs improvement, and plans to add online tournaments and the ability to challenge friends in a post-launch patch.

As you compete in games across the various modes, you earn experience points that grant you new card packs each time you level up or win a tournament. These packs are your only chance to unlock more of the 250 current and former NBA players on the roster. This format serves the game well, but as with other games governed by random number generators, expect a lot of duplicates. Opening a new pack only to see that you have three of the five cards already bums you out every time. The roster itself is a healthy mix of legends like Shaquille O’Neal and Wilt Chamberlain to modern-day stars like LeBron James and Steph Curry. Several team lineups have glaring omissions like Klay Thompson, Isaiah Thomas, and Giannis Antetokounmpo (though Saber plans to continually add new players).

NBA Playgrounds may not revolutionize arcade basketball, but it’s a welcome newcomer. If Saber Interactive tightens its gameplay shortcomings and introduces more ways to play, the game could have a healthy run as an alternative for those who don't want the heavy investment of a sports sim. 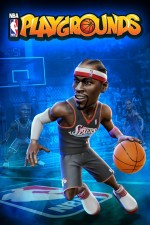 NBA Playgrounds may not revolutionize arcade basketball, but it’s a welcome newcomer.

Purchase More Info
7
i
Game Informer's Review System
Concept Bring back the glory days of arcade basketball, but introduce some modern refinements
Graphics The colorful courts and big-head style characters fit the lighthearted theme. But man, those shoes are atrocious!
Sound Limited commentary doesn’t inject much life to the proceedings, and the soundtrack may drive you mad
Playability This arcade sports game is easy to pick up and play, but expect some shot-timing headaches
Entertainment Considering legacy brands like NBA Jam and NBA Street are nowhere to be found this generation, NBA Playgrounds is a welcome hoops diversion for sports game fans
Replay Moderate