After last year's dreadful reboot of NBA Live, EA Sports acknowledged its shortcomings while reaffirming its dedication to simulation basketball. That patience will be tested for at least another year, because though NBA Live 15 makes some crucial strides on the hardcourt, the series still has a sizable deficit to overcome in the competition against its rival.

Most of developer EA Tiburon's efforts went into improving the moment-to-moment gameplay, and this focus largely pays off. The player models, lighting, crowd, and commentary all take drastic steps forward, and while you still may see the occasional gaffe like a player taking a shot with his back to the basket, these immersion-shattering episodes are minimal. Instead of suffering through an unending parade of technical shortcomings, Live 15 at least looks the part of a new-gen basketball game.

With better understanding of spacing and off-ball movement, the players have a more articulated sense of purpose, largely reacting as you would expect. Strategy has also improved thanks to play diagrams appearing on the court and the ability to send teammates into motion on the fly by tapping the left bumper. However, don't mistake NBA Live 15 for a true simulation – an arcade experience hides under the thin sim veneer. Steals and blocks abound on the defensive side of the court, and I toyed with opposing A.I. defenses like LeBron James taking on a junior varsity player, driving to the basket at will and raining down threes with absurd shooting percentages. If you're looking for a challenge from CPU-controlled teams, look elsewhere. Defeating the opposition by 20-30 points was the norm, even on the highest difficulty. Without any sliders to adjust the challenge, it's easy to learn the A.I.'s tendencies and exploit them.

The controls give you more agency over your team this year, but some areas still need improvement. Sometimes shooters pulled up for jumpers when I intended them to drive to the hoop, they can display a lack of awareness or urgency around loose balls, and the low-post game is in drastic need of more varied shooting animations. Expect to see some hitches in transition animations, and clipping is still a problem both on the perimeter and in the paint. Fouls happen more frequently than in most basketball games, which I liked, but players are fouled when shooting from beyond the three-point arc too frequently.

With so much emphasis placed on improving fundamentals, it seems EA spent little time on enhancing the game modes. Both Dynasty and Rising Star are underdeveloped. Dynasty checks off all the core competencies, but its easy-to-exploit scouting, shallow progression, and inability to trade future picks or sign players to extensions during the season keep it from appealing to sim fans. Rising Star suffers from a camera that doesn't always follow the player, a simplistic grading system that fails to take into account more nuanced ways players affect the game, and questionable rotation logic that regularly left my star player on the bench in the fourth quarter of close games even though I was the leading scorer and had a strong grade.

Given these shortcomings, the best way to experience NBA Live 15 is online. Head-to-head seasons give you something to work for while playing with regular rosters, and obsessing over building the perfect team in the engaging (and potentially spendy) Ultimate Team mode is fun when you can find an opponent. The latter isn't as fully featured as its EA Sports counterparts, missing divisional rankings and granular search tools (like a way to triangulate searches around particular skills), but at least it has an auction house this year. With the majority of hoops fans playing NBA 2K15, the population pool for Live is understandably small. When I did find matches, the performance was stable. EA also likes to tout its Live Seasons mode, which recreates challenges from recent NBA games for players, but these shallow one-off scenarios don't appeal to me.

NBA Live 15 may not be ready to stand shoulder to shoulder with its competition, but with much improved presentation and mechanics the series is trending in the right direction. The remaining gameplay issues and lack of mode depth, however, makes it tough to recommend this particular version.

5.75
About Game Informer's review system
Concept
Concentrate all efforts on shoring up glaring deficiencies on the court
Graphics
Improved player models help bring the on-court action to life
Sound
Respectable commentary from the booth, but expect some stretches of dead air
Playability
The controls generally work well, but sometimes your player takes a jumpshot when you want him to drive the lane
Entertainment
Improvements on the court are hindered by the lack of compelling modes
Replay
Low 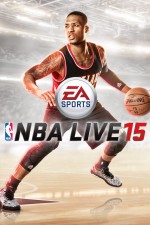