In the height of the arcade era I probably spent the GDP of Burundi raining threes and shattering backboards in NBA Jam. But after years of success, the franchise found itself in a scoring slump and inevitably retired to the bench. After Midway liquidated its assets, the franchise license fell into the lap of EA, which just happened to hire original NBA Jam designer Mark Turmell shortly thereafter. Cue the Rocky comeback training montage and overdub it with a Boomshakalaka. NBA Jam is back, and it’s as good as you remember.

This over-the-top take on the NBA trims away the fat from team rosters to deliver glorious two-on-two gameplay with the most recognizable faces in the sport, as well as a few guest appearances from celebrities and politicians. Most teams have unlockable legendary players from the original games as well, with a few glaring exceptions like Charles Barkley, Reggie Miller, and Shawn Kemp. The art style takes a page from South Park, as pictures of player faces are Photoshopped onto animated bodies with hilarious expressions that change as they perform different actions on the court.

The tried and true gameplay remains largely unchanged. Each game is filled with thundering dunks, bombs from three-point range, and an excessive amount of blocks, steals, and flying elbows. Hitting three shots in a row without letting the other team score sets your player on fire, but this doesn’t increase your shooting accuracy as much as in years past. EA did an admirable job translating the controls to the Wii remote and nunchuk, but it’s not without problems. When you jump to block or take a shot, sometimes your character jumps again immediately after you complete the motion, which can easily cost you a basket in tight games.

The classic campaign structure returns, but EA wisely complements it with a few new game modes as well. The Remix Tour offers a host of different game types, challenging you to destroy a team’s backboard or control hot spots on the half-court to rack up more points than your opponents. My favorite is the Remix 2v2 game, which intermittently strews power-ups across the court that your player can use to get the upper hand on the competition. Those who crave a hardcore challenge will adore the Boss Battles, which pit your skills one-on-one against NBA legends like Larry Bird and Dr. J.

NBA Jam’s only major flaw is the lack of online multiplayer. This game was made for competition, and not everyone has three other people to play with in their house. I’m glad to see the full game is getting ported to the other consoles so we can challenge our friends online. 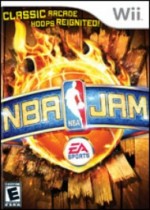 Cue the Rocky
comeback training montage and overdub it with a Boomshalaka. NBA Jam is
back and as good as you remember.