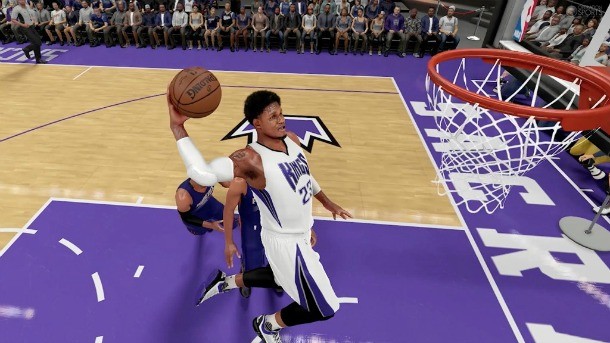 Letting a championship slip out of your grasp can be a harrowing experience for a franchise. Some teams never get over the hump, fading back into the pack never to emerge as a contender again. Others use the disappointment as motivation to improve and prepare for a second run. Visual Concepts found itself in this position after server woes sullied the launch of the otherwise impressive NBA 2K15. Using the offseason to retool, the series has emerged with its best effort in years.

NBA 2K16 is the virtual equivalent of a player who can play all five positions on the court. The already strong gameplay receives a boost this year from a redesigned post game that lets you back down players with a press of the left trigger, a welcome return to days of old. Passing also received an overhaul, giving you three face buttons for lobs, bounce passes, and the traditional toss. Double tapping these buttons gives you quick access to alley-oops and flashy passes as well. Having these options at your fingertips is great for specific situations, but expect to still use the icon-based passing because directional passing can occasionally misread your intent and send a ball across the court instead of into the post.

You will need all the tools at your disposal to keep up with the impressive A.I. in NBA 2K16, which is the best I’ve seen in a sports game to date. Each team employs different strategies, making every game feel different. Teams run play sets to get their best players involved, attack quickly in transition, and react to your tactics on the fly. This dynamic gameplay translates across NBA 2K16’s strong collection of game modes.

For the last few years the destination mode for NBA 2K games has been MyCareer, which puts you in the shoes of an up-and-coming baller breaking into the NBA. This year 2K handed the storytelling duties to famed director Spike Lee, who takes the experience in a decidedly cinematic direction. Users still create their own player, but Lee is the true owner of this story. Player agency means little to Lee – no matter what race or creed you create for your MyPlayer, you play the role of “Frequency Vibrations,” a high school hoops sensation born and raised in Harlem. I embraced this narrative direction since this is the story Lee wanted to tell, but the dissonance of seeing my pasty white player interacting with his black twin sister ultimately made me go recreate a different character so the cutscenes wouldn’t be so jarring.

Though you get to pick which college “Freq” attends before getting to the NBA, the rest of the MyCareer infrastructure is stripped bare for the sake of telling a direct story. As you play through high school, college, and your rookie season, you don’t earn VC to upgrade your character, get performance grades, or have access to social media interactions or team season statistics. Instead, you’re in the passenger seat for a story about the trials and tribulations Freq faces as he transitions to a lifestyle of the rich and famous, where every decision he makes is scrutinized. The directorial vision and acting are both drastically improved over the last few MyCareer stories, but divorcing the story from the traditional My Career infrastructure ultimately fails.

Once Lee’s tale comes to a close, the true MyCareer experience opens up and agency is restored to the player. Here you can earn experience to improve basic skills, unlock new animations, and purchase apparel. Visual Concepts redesigned the off-day activities to force players to choose between training with their team, making player connections with NBA stars, and managing the various endorsement deals that require personal appearances at events. Balancing these elements for their advertised rewards makes off-days as compelling as the game days. The only major knock I have against this mode outside of divorcing the story from the game infrastructure is the obnoxiously low player rating at the start. Though my player was drafted in the top five picks, where no other player was below a mid-70 grade, I came into the NBA rated 55 – not even good enough to crack some NBA D-League rosters. This makes the early part of your career a slog, which may be why so many people spend real money to purchase VC and accelerate the rise to stardom.

Users’ willingness to spend above and beyond the base cost of the game was readily apparent my first trip to the MyPark, which returns with the server stability the last two games sorely lacked at launch. On day one several players were already ranked in the high 80s and donning expensive apparel. I still loathe the general infrastructure of this mode, which makes you stand around waiting to play just because the particular lobby you are in has full courts, but the street ball theme is fun.

More serious online ballers can try out the new 2K Pro-Am, which pits teams of five against each other. You can jump right into a pickup game, or create your own team (complete with customized logos, jerseys, and court). I generally had good luck connecting, though some have had problems getting into games.

As fun as these modes are, my favorite way to play NBA 2K16 is MyGM, which gives you say in all the organization’s day-to-day operations. From tweaking ticket prices and building the roster to managing staff personalities and training regiments, this is the deepest franchise mode in sports games. The many systems at play rival those of dedicated sim games; you can even relocate you team to another city, build a new arena, and design new jerseys. Doing so will require patience; you need to earn resources from the team owner to fund the move, and you need 16 of the 30 team owners to back your move as well.

In addition to these deep modes, NBA 2K also offers an online franchise mode, online versus play, and an Ultimate Team style MyTeam mode that offers a variety of ways to play, making this the most robust sports game on the market by a wide margin.

NBA 2K16 is the first true classic sports game of this console generation. I can only hope other sports games follow Visual Concepts’ steadfast dedication to innovating on both the gameplay and game mode fronts. 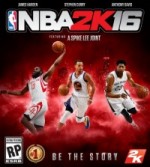 NBA 2K16 is the first true classic sports game of this console generation.

Purchase More Info
9
i
Game Informer's Review System
Concept Continue to push the boundaries of sports games with ambitious innovations in gameplay and modes
Graphics From the realistic player models to the first-class broadcast presentation, this is the best-looking sports game ever made
Sound The acting in MyCareer is dramatically improved, and newcomer Greg Anthony slides between commentators Kevin Harlan and Clark Kellogg without a hitch
Playability The already stellar gameplay gets better with new dedicated passing buttons and more size-ups
Entertainment With several modes worth playing, NBA 2K16 offers the most value you’ll find in a sports game
Replay High