Developers of sports games do an admirable job of capturing the essence and excitement of the modern leagues, but few tap the deep well of history in service of the sport. This is often chalked up to logistics – since the players from bygone eras no longer are serviced by player unions, the developers must sign each individual athlete to craft a historical recreation. Visual Concepts toyed with this concept with All Pro Football 2K8, but with no league license the experience rang hollow. In doing the groundwork to retell the storied past of basketball’s most decorated legend, Michael Jordan, 2K Sport has proven the results are worth the effort.

The Jordan Challenge is my favorite new sports game mode of the year. Visual Concepts painstakingly recreated 10 memorable events from the career of His Airness, signing all the players from the era, animating them with signature shots, and even providing historical commentary to give gamers the context of Jordan’s achievements. The attention to detail paid to Jordan himself is remarkable – 2K nailed the jump shot, crossover, ball fake, signature dunks, tongue wagging, and even the competitive stare of its cover athlete. This is a mode every hardcore basketball fan should experience, and other developers should follow suit in recreating classic moments of other sports with this level of dedication.

This attention to craft is also apparent in the Association mode, which for years has stood as the best franchise experience in the sporting realm. With many of the finer details already in place, this year the mode received a subtle makeover in several areas. The new trade finder is helpful in finding willing suitors to unload a troubled player or unwanted contract. The draft day features more trade activity than ever before. The AI-controlled teams are more aware of when they should be starting a fire sale, collecting young players for rebuilding, or grabbing a veteran player to make a title run. The only nagging complaint I have about the mode is that it's not immediately evident that you can sign players to contract extensions during the season; the player must first demonstrate interest in resigning before you can open negotiations.

Last year 2K unveiled its My Player mode, a stunted attempt at putting you in the shoes of a young player trying to make an NBA roster. The mode is more enjoyable this year thanks to an experience system that results in better rewards for good performances. The reward logic is still touchy – you get knocked an absurd amount of points for letting your man score and you hardly receive any bump for draining shots yourself. The skewed system also over-rewards you for playing out of position – for instance, point guards get an uncharacteristically high bump for grabbing rebounds under the hoop. But once you get the hang of the grading system you should start stringing together strong performances. One carryover complaint from last year: The mode still starts you out with too low a rating. A 40-rated player would never get drafted in the first round, so if you’re going to let me get selected this high, shouldn’t I have a commensurate rating?

While My Player and Association are great destination modes, NBA 2K11 is still catching up online to superior experiences like the EASHL in NHL 11. You can create a Crew and import your My Player to play in five-on-five matches, but with no online league infrastructure it’s not the destination mode it could be. The on-court play runs smoothly for the most part, but I did notice brief moments of lag.

On the court, 2K delivers many subtle changes that should please hardcore hoops fans. The off-the-ball defense is drastically improved – players more actively police passing lanes and rotate properly. The game has a better sense of differentiation between untalented ball handlers and gifted dime-dishing point guards – no more outlet passes from your backcourt after a basket to beat the defenses to the paint. The refined collision system looks great, and the tweaks to the dribbling mechanics make the complicated system more accessible. My favorite new feature is the informative new playcalling system that draws the plays right on the court so you know where you should be at all times. The only complaints I have are the return of a few legacy issues like poor sideline negotiation, players shooting balls off the side of the backboard when shooting from the baseline, the strange magnetism that redirects your player while playing defense, and the fundamental problems with help defense. Players often don’t face the right way or attempt a proper steal when double-teaming.

While its competitor struggles to find its shot, Visual Concepts keeps refining its game and opens a new door to the sports genre with the must-play Jordan Challenge mode. With solid presentation, a great franchise mode, and strong gameplay, NBA 2K11 is an impressive package. 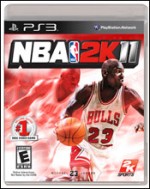 Purchase More Info
8.75
i
Game Informer's Review System
Concept Recreate the biggest moments from the best player in basketball history’s career
Graphics A fantastic array of generic and signature player animations gives this game the look of a real-life broadcast
Sound Solid commentary and the best sports game soundtrack of the year
Playability You can break out of animations more frequently, and the rest of the solid controls return from last year
Entertainment A total package marred only by small gameplay glitches
Replay High