NASCAR the Game: Inside Line I'm heartened by developer Eutechnyx's progress with the NASCAR series from last year's inaugural iteration. The game's career mode has been fleshed out, and the series has made progress in other key amenities such as a fuller online package, more race weekend options, and decent racing. It takes more than solid running to push to the front of the pack, however, and Inside Line doesn't have what it takes to seal the deal in the closing laps.

The series' garage hub finally has something in it thanks to the new career mode. It's fun to work your way up the sponsorship ladder and at the same time upgrade your car and overall operation. The car upgrades are balanced pretty well. In the middle of my first season, I started to field a car that could run in the middle of the pack thanks to a few upgrades – of which there are is a good variety of individual parts and full package upgrades.

By the end of that season, I could win races (including some with a little luck and pit strategy), but I had reached a wall of sorts. This wasn't necessarily a bad thing. I had a good car, but it was up to me to be a better driver by managing my equipment, turning in consistently good laps, and being good in all the corners so I could hang with the better drivers on the track. Using tracks' multiple racing lines, slingshot passes, and bump drafting also played a part in improving my results.

As many different ways as there were to improve my performance, the AI cars did so little to improve theirs. Although AI cars would pit at different intervals, often it was too easy to catch them on bad cycles and gain positions towards the end of races. The field usually followed each others' lines like slot cars. But perhaps most damning of all, the AI cars simply don't know how to drive very well. During races there would be abrupt slowdowns in corners for no apparent reason and their wreck avoidance was virtually nonexistent.

These are the kinds of things that spoil the overall picture for the game. It has its share of fun moments, but there are also a lot of areas of the sport that simply aren't covered. Apart from the aforementioned oddities – and as improved as the career mode is in general – I'd still like to see a silly season, NASCAR discipline for on-track altercations, inter-team politics with teammates, driver rivalries, and much more. At least the game's online package has improved with a full race weekend now available for racers.

Inside Line is a step up from its predecessor in every way, but it falls short of being a winner. However, this year's title is like points racing: Even if you can't win it all, you can still make up some ground. 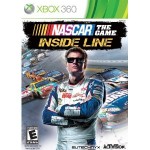 NASCAR the Game: Inside Line

Inside Line is a step up from its predecessor in every way, but it falls short of being a winner.

Purchase More Info
7.25
i
Game Informer's Review System
Concept Offer a much more robust career mode than last year's barebones model
Graphics Cars' damage looks better, although a lot of it is superficial
Sound Your spotter is timely and very useful – it must be a first for a NASCAR video game
Playability A rewind feature has been added for those who can't keep it off the wall
Entertainment Inside Line makes the garage come alive more than ever, but the overall experience still needs more
Replay Moderately High