Perhaps kart racing is more spiritually related to stock car racing than you or I think. After all, we've come to expect dramatic worst-to-first finishes at restrictor plate tracks like Daytona or Talladega as drivers work with teammates and the draft to sling themselves to the head of the pack. If only this game spent more time exploring such connections and catering to the sport, it would be more than a by-the-numbers copy of previous kart racers.

Teammates are a big part of NASCAR, and this game smartly makes it a focal point of the gameplay. Drafting with your partner earns you boost, and the game even awards you a win if your partner comes in first and you don't. Apart from drafting, however, the game doesn't make use of the sport. Pit road isn't integral to the racing, and there aren't even any power ups or attacks involving both teammates. Hell, the multiplayer isn't even co-op.

Whatever opportunities this game misses, it does just enough to make itself playable. Power-ups are a random bag of missiles, oil slicks, vision-obscuring ads, and more. Driving can be handled quite capably with either a Wii remote or a dual remote/nunchuk setup, and it includes the ability to powerslide. It would have been nice, however, if the controller functionality included motion-based power-up attacks.

This standard kart racing setup isn't helped by the fact that the track selection over the game's 13 racing series (mainly road courses) gets old fast regardless of the reverse course layouts. Scant few special racing events are included, and even these aren't enough to alleviate the racing boredom that quickly sets in. Turning left for 600 miles at Charlotte seems like a thrill a second in comparison.

One of the more unfortunate things about this game is that for a supposedly comical kart racer, the drivers' personalities rarely come through. At its worst, NASCAR Kart Racing stands out as little more than a marketing opportunity in a sport already filled with them. 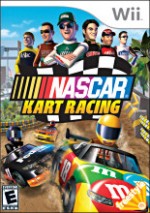 NASCAR Kart Racing
6.75
i
Game Informer's Review System
Concept Make a NASCAR-themed version of Mario Kart. Who's the NASCAR version of Luigi in this game? Elliot Sadler? Yeah, Elliot Sadler
Graphics Funnily enough, the cartoon look isn't out of line with the way a sponsor-splattered stock car usually looks
Sound The game uses Sims-speak gibberish, but it's not like it really matters to a kart racer
Playability Play with the nunchuk controller for steering -- versus just using the Wii remote -- as it makes powersliding and other controls easier to pull off
Entertainment More gameplay-related NASCAR touches would have made this a better title
Replay Moderately Low