There have been many Naruto games before, but Generations boasts both the rosters of young Naruto and friends, and the older Shippuden variety. Each character has a familiar list of moves and Chakras – from the silent and grim to the appropriately comical – in a faithful fighter that suffers from a disconnect between what’s wanted in a video game from anime fans and fighter enthusiasts.

Naruto games are more story-focused than the usual Street Fighter ilk, though focus isn’t to be confused with adeptness. Known and loved as the Naruto storyline is, Generations merely provides comic-style summaries between fights, one frame at a time.

Visually, Generations is exactly what Naruto fans are after. Rather than locking onto your fighter, the camera will zoom in and out, keeping both players on-screen as they run around the 3D arena. Seeing Naruto replicate himself to overwhelm an enemy, and the equivalent stylish realizations of 71 other playable characters, is the game’s main strength. And with only one attack button, it also happens to be the easiest 27-hit combo you’ll ever pull off.

Any assumptions you’re making about that are probably right. A glance at the PS3 version's combo list reveals several variations of Circle, Circle, Circle, Circle, Up, Circle. Yet for a game with one attack button, the rest of the fighting system is cluttered. Each character has four items (triggered by the D-pad), from firebombs to food, usable at any time. Four status bars to keep track of (eight if you monitor your foe’s, which you should) are accompanied by your two possible teammate assists. My problem isn’t with the UI itself – it’s that there’s more going on around the combat than in it.

There’s still enough room in these 3D arenas for a decent amount of strategy to be applied. So many characters means a healthy variety in playstyles – from keeping your distance and sniping until their guard crumbles, to sticking and moving, to all out brawler. Once melee is initiated, fighters can go tit-for-tat interrupting each other's combos, but if your combo breaking meter is less than your enemy’s, the onus is on you to invent an escape.

On your last half of health, you can enter the new “Awakening” mode: a state that channels your inner beast, taking on its form with increased speed and power. Think of every character as a potential Phoenix with X-factor from Marvel vs. Capcom 3, keeping with Generations’ main philosophy of minimal effort for maximum reward.

Full of fan service, this one is for the Naruto faithful. It’s competent and looks great, but if you’re just after a good fighter, you can do better. The fighting genre is experiencing somewhat of a second golden age of games right now and Generations isn’t quite one of them.

This review originally ran in the May 2012 issue of Game Informer Australia. 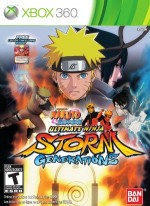 Full of fan service, this one is for the Naruto faithful.

Purchase More Info
7.25
i
Game Informer's Review System
Concept A vast amount of characters from the Naruto universe brought together in an improved fighting engine
Graphics Superb anime visuals and stylish attacks in combat, though story mode is limited to still frames
Sound Appropriate sound effects, but oddly peaceful piano music takes away from what should be epic story battles
Playability No tutorial makes things rough at first, but this style of combat performs well even with lag
Entertainment Depending on skill, playing through the timeline of young and old Naruto, as well as Sasuke, will take about seven hours. But mastering every character in multiplayer will take significantly longer
Replay Moderate