It's hard to introduce new controls to racing games, but MX vs. ATV series developer Rainbow Studios is in a unique position in comparison to its racing contemporaries. Since Reflex is a motocross and ATV title, there is a focus on the rider that traditional racing games don't have. Reflex's new controls let you move your rider independently of the bike, and like one hand not always knowing what the other is doing, the results are mixed.

In some ways, Rainbow's new right analog control offers the best of both worlds. It creates a different experience for the player without being so unfamiliar that it becomes hard to grasp. Since the right analog controls move the weight of the rider around the bike, your turns can be sharper and you can influence the position of your bike mid-air. Accordingly, the right analog also serves as your pre-load, and can be used to avoid wrecks after sloppy landings (the game gives you a quick onscreen prompt). It's easy to enjoy the benefits that the controls convey, and I like how it adds another dimension to the rhythmic nature of Rainbow's brand of racing.

Perhaps more importantly, the game uses the right analog for a new trick system that replaces the convoluted one used in the last MX vs. ATV title. Because of the older games' trick controls, I was never a huge fan of this portion of the franchise, but that changes with Reflex. The right analog stick has made the Freestyle mode fluid and fun.

Reflex's new controls, however, aren't without their problems. Sometimes your rider gets stuck in a lean, belying the amount of control the right analog normally gives you. Moreover, the game's physics can be too jumpy, causing your rider to pinball around the track. This can be a problem when you run into other bikes on the track, or the game simply might ignore a collision. These problems can create a racing experience that varies from fun to frustrating.

The game's career mode is functional, but I wish that there was more to it than simply going from race to race. Perhaps an emphasis on lifestyle or choosing sponsorships would inject some weight into the career.

MX vs. ATV: Reflex features some great racing moments, but the game's technical ambitions sometimes get in its way. The possibilities of reflex racing with the right analog are clearly there, they just haven't been mastered yet.

7.5
About Game Informer's review system
Concept
Shake up the traditional Rainbow Studios motocross formula with new rider controls on the right analog stick
Graphics
The game good looks are especially evident in the open world segments in the Free Ride mode
Sound
Nothing out of the ordinary here
Playability
The new right analog stick rider lean controls work so-so. The new trick system, however, makes pulling off moves easy
Entertainment
Freestyle mode gets a big boost this year, but the racing is uneven thanks to the exciting but flawed controls
Replay
Moderately High 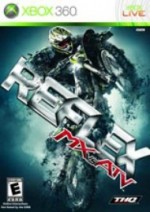