A lot of hope rests with Muramasa. A samurai-infused 2D action game from the makers of the exceptional Odin Sphere, Muramasa is a visual masterpiece with the potential to appeal directly to the Wii’s hardcore base. But simply wanting to like Muramasa isn’t enough; it also needs to hold up its end of the bargain as a piece of entertainment – a feat it manages ­only ­sporadically.

No one can deny that the game is beautiful. The vibrant backgrounds, hulking bosses, and flashy combat make Muramasa a treat to behold. I definitely took a little extra damage because I was staring at the gorgeous art instead of paying attention to my enemies. A little more context behind the characters and their breathtaking surroundings would have been nice, but narrative clearly isn’t a priority. Instead of getting a story, you’ll traverse the Japanese countryside, encountering random ambushes by various ninjas and mythical beasts.

Combat is where Muramasa’s sharpened blade truly shines. Movement is quick, controls are responsive, and the intense action puts your reflexes to the test. Mid-air clashes over the rooftops and effortless dashes through enemies give combat an exhilarating kinetic vibe. Unfortunately, most encounters don’t last more than a minute or two, forcing you to sheathe your blade just when you’re warming up.

As much as I enjoyed the battles, the system doesn’t get deeper or evolve. The moves you perform during the tutorial are the same ones you’ll use against the final boss, save for your sword-specific special moves. You never get the sensation of becoming more powerful as you progress; the swords you forge grow stronger, but so do the enemies, so nothing really changes. In a particularly lame decision, the two playable characters even control identically.

Apart from the disappointing ramp-up, Muramasa’s other major issue is backtracking. Certain s words essentially act as colored keycards, breaking down previously impenetrable barriers – often in areas you’ve long since beaten. This means you need to take an uneventful run back, fighting weak enemies along the way. The process serves no purpose other than artificially extending the game and snuffing out your enthusiasm in transit.

Even in the face of some structural missteps, Muramasa is a visually stunning game that is entertaining in the heat of battle – though that heat eventually cools down due to short and shallow encounters. Without better pacing and a lot more depth, Muramasa isn’t fit to run with the top-tier action titles.

7.75
About Game Informer's review system
Concept
The creators of Odin Sphere mix 2D sword swinging with Japanese folklore
Graphics
Simply gorgeous. The backgrounds and character designs are perfect examples of artistic direction done right
Sound
All of the voicework is in Japanese, which works well considering the setting
Playability
Two difficulties and straightforward controls make it an easy game to pick up, but a hard one to master
Entertainment
Lots of fun when you’re fighting, which you aren’t doing enough of the time
Replay
Moderate 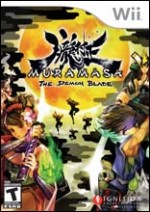