Even though Mud is the official game of the FIM Motocross series, it's a title without a real identity. At first I thought it was a shill for Monster Energy – that's just how uninspiring and unmotivated much of this game is.

Mud features 84 real riders and a dozen tracks on the circuit, but it's the racing itself that reduces its scope and strangles its ambition. The tracks may feature mud, undulating terrain, and hundreds of ccs of bike power, but it looks and feels too stiff to be immersive. Riders don't have a lot of range in their movement, and the bikes feel like they are almost gliding on the dirt. The effect is that although the game delivers a sense of speed and you'll fly through the air off of jumps (as well as gain speed boosts for kicking out your back wheel in mid-air), as you're racing you don't feel like you're sliding the bike through the dirt, bouncing the shocks, and finessing the bike around the course.

Another disappointing aspect of the game is that although the game modes are all-encompassing, they definitely leave you wanting more. You can pick the races you want to comprise the FIM championship, but it lacks any fanfare. The Mud World Tour mode lets you race as different "heroes"; upgrading their stats and doing different types of races like checkpoint, trick battles, and head to head, but it's not balanced well. The trick battles can be spammed with the same basic tricks (negating the need to buy new ones), and although the game encourages you to switch riders in this mode according to their proficiencies, it's not always necessary.

I commend the developer for including different modes, but their inadequacies reveal a title that doesn't fully develop any one aspect of itself.

6
About Game Informer's review system
Concept
You want motocross? Mission Accomplished. Don’t ask for more because you won’t get it
Graphics
Nice color palette, although textures pop in as you race. Interesting point: There a couple of tracks that do the “It’s right about to rain” look that is more than just the standard grey sky
Sound
Nothing that’s outstanding or which will stop you from turning it off/down
Playability
Response time on the trick system is a tad slow, but the timing of performing scrubs feels good
Entertainment
Feels more like a Sunday ride than having fun in the dirt
Replay
Moderate 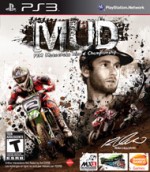