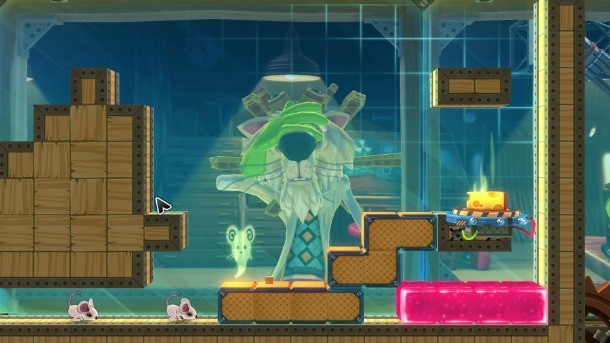 DMA Design’s early ‘90s puzzle game Lemmings consumed many of my after-school hours. Its absurd gameplay – which had players leading a flock of lemmings through an obstacle-filled environment – was so rewarding that I’ve often wondered why more developers haven’t returned to the formula. As if answering an unspoken prayer, indie studio Crunching Koalas has released a charming puzzle game that takes Lemmings “lead to safety” concept and combines it with Tetris’s spatial block manipulation. This combo is so simple yet rewarding that I’m surprised no one has stumbled on this winning formula before.

MouseCraft places you in the paws of a crazed cat scientist named Schrodinger, who runs a series of eccentric tests on three blind mice. In the name of science, you are asked to guide these mice from their mouse wheel to a cheesy reward, but deadly pits and other obstacles make this journey a fearsome trek. Using a limited supply of bombs and an iconic-looking set of blocks, you can circumvent these obstacles and ensure that your mice get their lunch.

MouseCraft’s premise is simple, but many of its puzzles are not. Often some obstacle is preventing your mice from reaching their goal, and evil robotic mice, acid baths, and explosive blocks can quickly cut down your rodent herd. I often fell few pieces shy of being able to complete certain challenges. Thankfully, a few moments of pondering and experimentation usually deliver the rewarding eureka moment.

Crunching Koalas does a great job of expanding the mechanics in order to prevent the game from growing stale; just when I was starting to feel like it was running out of tricks, the game would throw a new block type at me that added more wrinkles into my experiments. For example, electric blocks come in handy for filling in small gaps, but they also turn water into a deadly mousetrap. Bomb blocks can be useful at clearing away unwanted obstacles, but if you’re mice get caught in the blast, you’ll be cleaning mouse guts out of your equipment. Each of these new block types made me rethink my strategy, and often created a new series of puzzle challenges that felt different than anything that had come before.

Most of MouseCraft’s puzzles are confined to about one screen, but that doesn’t mean they’re all simple tasks; I had to ponder a few for longer than I would have liked. Thankfully, you can take back previous moves if you accidentally drop a block that kills your pet. However, I wish I could manually control this rewinding, because jumping back to a previous move sometimes took me further back than I would have liked, and then I had to watch my mice trudge back through the maze in order to get to the point where they needed my help.

Thankfully, many of these gripes are minor, and they didn’t affect my overall enjoyment of MouseCraft’s clever puzzles. If you’re a fan of puzzle games, don’t miss Crunching Koalas’ brilliant remix. MouseCraft drops you into a series of challenges that will initially make you feel like a mouse trapped in a maze. But after working your way through these environments, you’ll feel like a mad scientist who can’t be stopped.

8
About Game Informer's review system
Concept
Take the guiding puzzle mechanics of Lemmings and mix in a helping portion of Tetris-style block manipulation
Graphics
MouseCraft’s production values aren’t high and its cartoony visuals feel uninspired, which is an unfortunate combo
Sound
While upbeat, the simple soundtrack is so repetitive that you’ll want to supplement it with your own music
Playability
MouseCraft’s two-button controls couldn’t be simpler, but Crunching Koalas still provides a wealth of puzzle variety
Entertainment
Crunching Koalas’ clever puzzle game feels like a healthy brain workout that should leave puzzle fans with a great natural high
Replay
Moderate 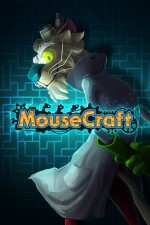