The Series Finally Gets Explosive
by Matthew Kato on May 27, 2011 at 09:04 AM
Publisher: Sony Computer Entertainment
Developer: Evolution Studios
Rating: Rating Pending
Reviewed on: PlayStation 3 Since the MotorStorm series has come out, I’ve argued that it’s needed to go big or go home. When Disney Interactive released Split/Second and Activision came out with Pure last year, it looked like everyone had beaten MotorStorm to the punch and expanded on the action racing foundation that the first MotorStorm had worked out back in 2006. And when Apocalypse announced that it too was doing large-scale destruction, I wondered how it was going to avoid the same fate. Even with these odds stacked against it, Apocalypse survives all the way to the finish line and is easily the most exciting entry in the series.

The game’s story is told in motion comics, but it’s laughably bad and not worth thinking about. Instead, concentrate on more immediate concerns like not catching on fire, avoiding building collapses, and even maneuvering around stretches of road bombed out by helicopters and natural disasters. Apocalypse’s crazy moments are scripted, but the game is far from predictable and boring. I didn’t have to re-race many levels, and there were enough races in the game overall that I was always seeing something relatively new.

Compared to Split/Second, Apocalypse is more passive, but I think it works for this game. Whereas in Split/Second you were always drifting, etc. to fill up a power meter that you could spend on igniting environmental set pieces to send crushing on your competition, Apocalypse builds tension and excitement simply through the racing and trying to stay alive. The result is that instead of relative lulls punctuated by big moments, the stream of thrills is steadier because the racing itself is better.

One of the ways the game achieves this is through the crazy roving gangs where the Festival races take place. They throw Molotov cocktails at you and their presence also provides context around some of the military action that’s impacting the races. Apart from being a nuisance (although you can run them over – and in 3D, too), the fire they spread can heat up your car and in turn interfere with your engine temperature if you’re turbo boosting. Alternately, water barrels and other water sources on the track can cool you down.

The game also creates better moment-to-moment racing simply because MotorStorm’s new gonzo direction fits nicely with the series’ long-standing emphasis on how the different vehicles interact appropriately with the terrain. If you thought you had it bad trying to ride a motorbike down in the mud with the trucks, you’ll have a harder time when the earth is quaking under your feet and trains and buses are being hurled in your direction. Finally, thanks to the rubber banding AI – unlike in Pacific Rift – competitors are grouped closer together, which makes things more exciting.

On the back end, developer Evolution Studios has finally added vehicle customization for home consoles via a number of visual options for your rides. These open up as you perform certain feats such as spending a certain amount of time in the air with the vehicle or drifting for a specified length. The quick race/multiplayer Wreckreation mode also features perks you earn, like better traction or turbo boost, which you can arrange into different loadout combinations. Perks only work in Wreckreation mode, and the customized rides don’t really appear in the main career Festival mode since you’re always switching up vehicles, but they are useable for multiplayer.

Multiplayer also features a leveling system based on chips. Getting more chips not only lets you unlock car parts and a variety of customization options – you can also use them for betting on races.  The game’s multiplayer takes its cue from shooters, and I think this kind of cross-genre borrowing is a great thing for the racing genre.

MotorStorm Apocalypse’s progress is only relative to the previous entries in the franchise. It doesn’t introduce anything revolutionary, but it does offer a thrilling experience in ways that are better than some of the games before it. The game’s survival instincts serve it well, and even help it thrive amidst the flames and wreckage. 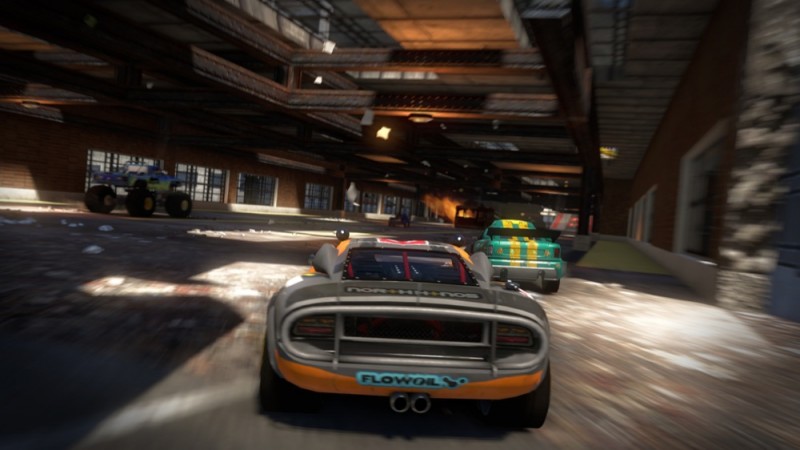 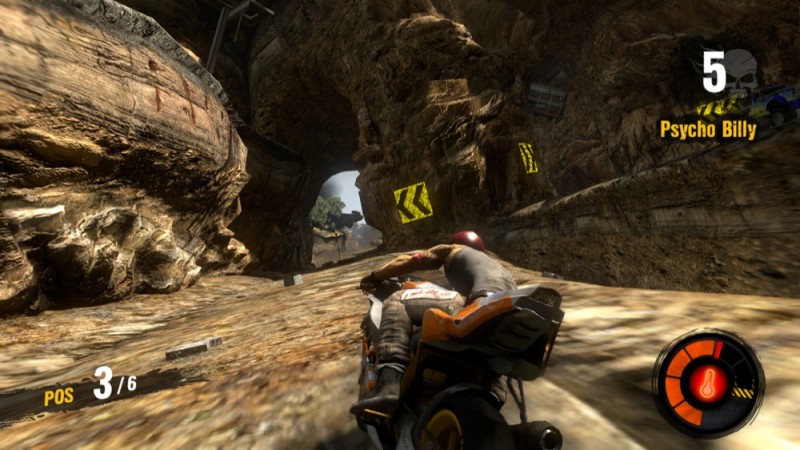 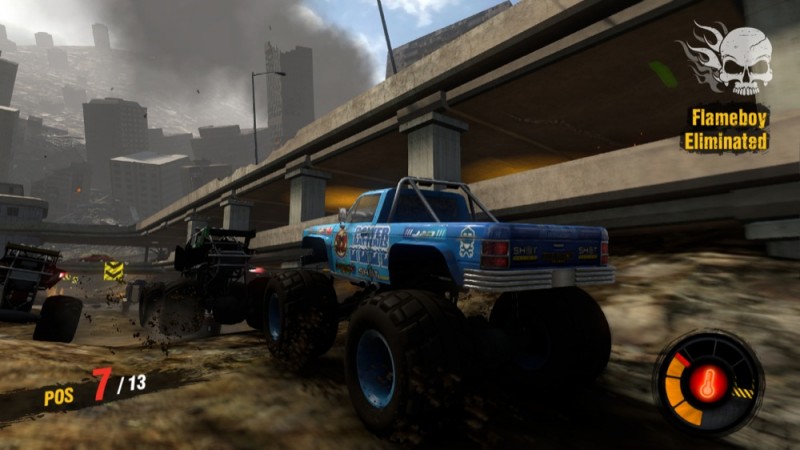 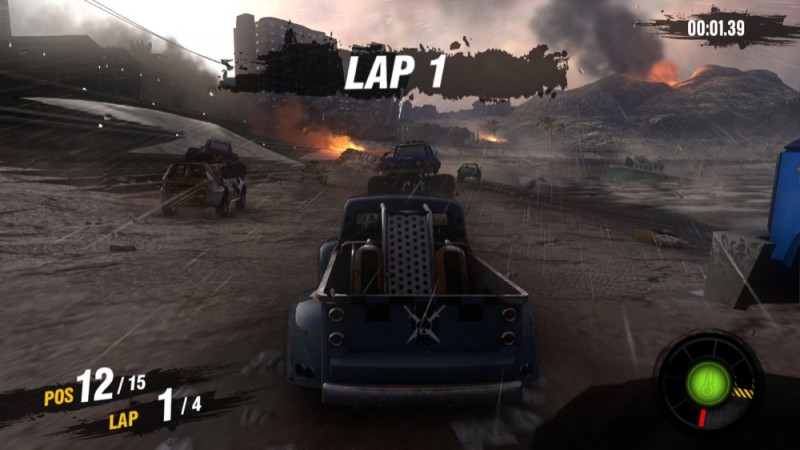 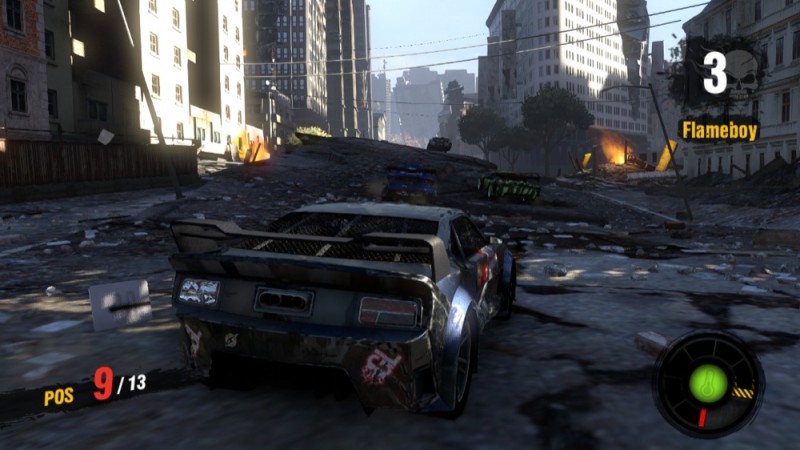 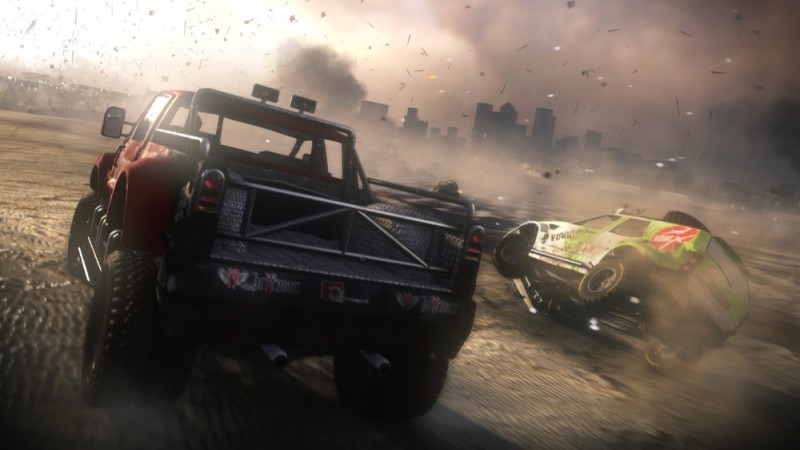 The MotorStorm series finally pushes the limits and goes crazy with man-made disasters and plenty of intense racing.

Purchase More Info
8.25
i
Game Informer's Review System
Concept Up the ante for MotorStorm’s races and, in turn, elevate the franchise
Graphics Little details like flying debris, camera work, and even the roadside fires go a long way toward making this game look great
Sound DJ Shadow’s MotorStorm remixes are the highlight, along with a Lalo Schifrin vs. Elite Force remix of “Bullitt”
Playability I didn’t love all the handling characteristics of the vehicles, but as in previous MotorStorms, some vehicles are better suited towards certain routes than others
Entertainment Apocalypse produces some good racing and adrenaline-filled moments
Replay Moderately High 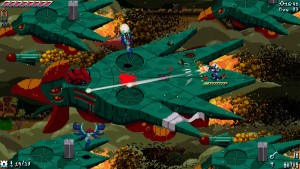