If you’ve ever wondered how item stores in video games manage to stay in business, Moonlighter lets you step behind the counter to find out. As a young merchant named Will, you spend part of your time tending to your shop, and the other part diving into randomly generated dungeons to restock. This straightforward premise initially shows huge potential, but like most jobs, routine sets in and leaves you going through the motions.

Moonlighter isn’t the only item-store simulator out there, but it sets itself apart from the competition with its fantastic retro atmosphere. The pixel art and music evoke a unique retro aesthetic without feeling like cheap nostalgia, which is rare feat. Beneath that alluring presentation is a formula that provides a few hours of simple fun. After exploring a dungeon, you sell the items you collected – a process which requires some trial and error, since you want to set a price that maximizes profits while keeping your customers happy. Then you use that money (and some materials) to upgrade your gear, helping you delve deeper and collect more valuable loot. After that, the cycle repeats as you defeat bosses and unlock dungeons with different visual themes.

At the beginning, I looked forward to spending my nights encountering strange foes and finding artifacts in the randomized dungeon layouts. During the day, I enjoyed the puzzle-like process of finding the sweet spot for pricing when restocking my shelves, with different customer reactions signaling whether the cost is too high or low. After scrolling through my ledger on a particularly profitable day, the urge to take just one more trip to the dungeons was powerful. Even the simple battles were entertaining, using top-down combat that borrows from games like The Legend of Zelda: A Link to the Past.

Despite all of its promise, the problem with Moonlighter is how soon the whole concept plateaus. Once the early thrills wear off, you are left to chase rewards that never ultimately pay off. As you craft and upgrade different weapons and armor, they get stronger – but they generally keep pace with enemies’ increasing power, so you don’t feel much improvement. Plus, without new abilities to expand your options, you’re using the exact same moves in the fourth dungeon that you used in the first one. This doesn’t dull the basic fun of combat and exploration in the moment, but it prevents the adventure from evolving.

Once you finish the golem dungeon and catalogue all of its treasures, you move on to the forest dungeon and repeat the same process. The environment and enemies change, but the template doesn’t; you fight through three floors and take periodic trips home to sell your spoils. No puzzles, no tricks – just clearing rooms. At the end of each dungeon, you fight a boss, but even those encounters feel similar. Whether it’s a robot snake or a ball of electricity, the bosses demand little from you other than getting close and swinging your weapon, using potions when necessary.

One interesting wrinkle in your journey is the addition of item curses. Objects you find might have one of these random properties, like breaking after you take too much damage, or destroying an item in an adjacent inventory slot. This adds a layer of management to your looting; you need to think about which items you collect and where they’re placed on the grid, so amassing artifacts isn’t only a question of how much space you have left in your bag. But once you get your treasures home, the routine kicks in again. Discerning the value of different items feels static. You’re putting a higher price tag on nutritive water than you were on iron bars, but your strategy never changes. Just take a guess, wait for a customer’s reaction, and adjust until you get the ideal response. However, I appreciate how the game remembers the right prices once you find them, which cuts down on the hassle of getting stuff on the shelves.

I wish I could say all aspects of Moonlighter were so user-friendly, but I encountered a variety of different technical problems during my playthrough. Customers not leaving my store (so I couldn’t close up shop), important enemies not spawning, and inconsistent hit detection are just a few examples. The severity varies, but the progress-blocking problems forced me to restart – an act that usually caused me to lose valuable items I had gathered. Frustrations like these put a major dent in Moonlighter’s long-term charm.

With four dungeons to finish and forget in a prescribed order (plus a final boss fight), the repetition makes Moonlighter feel less like one unfolding game and more like the same game four times. The story is barely present, and persistent elements that tie the rogue-lite experience together – like crafting and store expansion – have too little impact to convey a satisfying sense of progress. When viewed on a smaller scale, the accessible combat and simple formula make it easy to pick up and enjoy Moonlighter casually. However, my excitement and enthusiasm were at their highest during the brief window when I didn’t know exactly what to expect next.

This review pertains to the PS4 version of Moonlighter. The game is also available now on Xbox One and PC, with a Switch version planned for later this year. 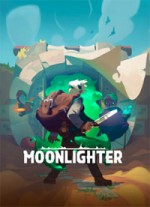 You run an item shop in Moonlighter, but like most jobs, routine sets in and leaves you going through the motions.

Purchase More Info
7
i
Game Informer's Review System
Concept Make a profit by pilfering treasure from dungeons, then selling them at your shop in a sleepy village
Graphics The pixel art is charming, from the environments to the creature designs
Sound Whether you’re relaxing in town or in the middle of a tense battle, the soundtrack is excellent. It reminds me of my favorite retro RPGs
Playability Uncomplicated controls make basic actions easy, but technical issues get in the way
Entertainment Exploring dungeons, selling loot, and upgrading gear creates is an enticing loop. However, the experience grows stale with repetition
Replay Moderate