When I heard that the original creator of Strider, Koichi Yotsui, was making a four-player action game that liberally steals from his classic hit I was onboard instantly. All the familiar elements of the original make the transition, including blurred sword swipes, dashing up and down hills, and climbing on walls and ceilings.

It’s not all old-school fan service, however. Developer Feelplus added in a new leveling system that allows players to invest points into stats and extend melee combos. Because you don’t lose experience, it feels like you’re making character progress even when you fail a level. Eagle eyed players can search out an absurd amount of hidden magic spells (called MoonSault Combinations) that are hidden around levels. These stay in your collection permanently, and do everything from healing to launching projectiles to freezing enemies. Only four can be carried into battle at once, so it’s smart to have some variety in your loadout.

All of these elements create a solid framework. Everything else brings Moon Diver down from potential greatness.

Slashing through mindless drone enemies is fun at first, but the same dumb guys just keep showing up with palette swaps and slight tweaks. The most deadly foes (outside of bosses) are terrible laser turrets that take off way more health than anything else. Levels become harder simply by choking corridors with these bastards. You have to use the freeze spell to shut them down, but that’s annoying since it plays an unskippable animation every time.

Bosses add some variety, but none really stand out – especially compared to the flying serpent in Strider composed of a chain of Soviet dudes. Solo players will learn to dread these encounters; they aren’t insurmountable, but the game doesn’t have checkpoints or lives. The first time you fight a boss, you’ll inevitably die trying to discern its patterns and have to start the stage all over again. The second time through you just want to zip past everything, but you have to deal with the *** lasers or fight it out in arena sections that force you to battle waves of foes. This frustrating loop is especially unavoidable in the last third of the game. But don’t lose all hope. Moon Diver has a flexible online matchmaking system that allows you to pair up with other players on any level, even if you haven't beaten it yet. The servers weren’t all that populated during the first week of release, but I eventually found partners to help me tackle particularly tough stages.

The multiplayer mode is a completely different experience. Players are flying all over the screen competing for kills, combining magic spells and draining bosses’ health bars in record time. The best improvement over the single-player experience is the New Super Mario-inspired co-op resurrection system. Fallen comrades are bound in neon rope and can float toward allies to get saved. Unless all player characters are roped up, you can keep coming back as many times as you want. This makes even the final boss, whose health bar seems unending, beatable with a decent team.

If you’re interested in Moon Diver, play halfway through the game by yourself to gain some levels, collect various magic, and get used to the structure. Then fire up multiplayer and never look back. 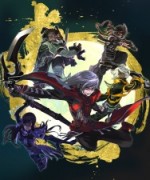 When I heard that the original creator of Strider, Koichi Yotsui, was
making a four-player action game that liberally steals from his classic
hit I was onboard instantly.