When a group of devious kids sneak into the Monster World and enslave its creatures, a young girl named Ellie comes to their rescue with the help of a rare monster named Chomp and a powerful bracelet. Monster Tale's cutesy demeanor and child-like themes may turn off some at first glance, but the genre-bending portable title offers a surprising amount of depth and gameplay variety.

Monster Tale provides tight 2D platforming across five colorful locales, each with its own theme and enemy types (though you'll run into the occasional palette swap). To accomplish her goals, Ellie relies on her legendary bracelet, which doubles as a blaster weapon. Whether it's learning to roll under a row of spikes, or gaining the ability to perform a rapid-fire blast with a quick button combo, players must master and upgrade all of Ellie's skills to progress though the levels. Hand-eye coordination and reflexes are put to the test in later boss battles, which require successful execution of all skills acquired for a gratifying victory.

Chomp's role in Monster Tale adds a Pokémon-esque monster-raising element that makes excellent use of the handheld's dual screens. With a press of the X button, Chomp retreats to the "Pet Sanctuary" below to help Ellie activate puzzle switches, pick up items that provide experience for leveling, take down enemies that sneak below, and activate combat items like catapults and soccer balls to knock out enemies above. Being mindful of Chomp's activities on the lower screen while guiding Ellie through combat sequences above makes for fun, if occasionally chaotic, gameplay. Chomp can roam along with Ellie on the top screen as well to lend a hand with monsters for experience points. These unlock evolved forms of the creature, which are worth experimenting with during tougher skirmishes later in the game.

Monster Tale does a great job of leading you to your next objective on the map, but since the lower screen is primarily used as the Pet Sanctuary, I found myself regularly disrupting gameplay to check the map in the menu to ensure I was taking the most efficient route toward my goal. As you progress through the world, your next objective often requires tedious backtracking across several environments. Instead of giving the player new experiences, you're stuck revisiting familiar areas and fighting familiar enemies several times over.

Criticisms aside, Monster Tale is a polished platforming adventure with light RPG elements that make it more than just another pet simulator. It uses the aged DS hardware to full effect for a novel experience. 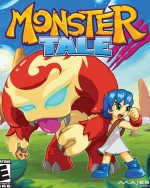 Monster Tale's cutesy demeanor and child-like themes may turn off
some at first glance, but the genre-bending portable title offers a
surprising amount of depth and gameplay variety.

Purchase More Info
8
i
Game Informer's Review System
Concept A young girl and her pet monster save enslaved critters from a group of evil children in a game that combines platforming, action/adventure, and light RPG elements
Graphics Childhood-themed environments are colorful, detailed, and well designed
Sound Each location has its own catchy tune
Playability Skill progression moves along a steady curve. Abilities are put to the test during chaotic boss encounters
Entertainment Despite its kid-friendly appearance, Monster Tale offers a surprising amount of engaging gameplay
Replay Moderately Low