The Monster Hunter franchise is well known for offering precise combat, a high-skill cap for weapon mastery, and boss-battling hunts against giant monsters that can withstand massive amounts of punishment. Monster Hunter Stories combines those monsters and biomes with turn-based combat and a monster recruitment system to deliver an interesting spin on the series formula.

Without the focus on real-time action, Monster Hunter Stories instead taps into a Pokémon-esque desire to catch, train, and genetically splice perfect monster companions. Discovering new monsters and customizing them via options that get progressively more advanced as you work through the game (like taking one monster’s abilities and putting them in another) is enjoyable. Collecting them is also fun, as you discover standard and rare egg nests – sort of randomized mini-dungeons where your goal is to sneak off with a powerful egg you can hatch later.

As a fan of the franchise, seeking out my favorite monsters like the terrifying, strange Khezu and enhancing them was a treat. Hunting down eggs and finding out what’s inside, assembling your perfect monster squad, and dialing down deeper to create ultimate allies forms a satisfying loop. The overworld is neat to explore and nothing like the self-contained island-find boss-exit style of the core series and constantly refreshing itself with crafting materials, egg dens, and monsters to battle.

While the game is incredibly accessible due to the rock-paper-scissors turn-based combat system, it’s a double-edged sword. The simple combat system is mastered quickly, and although weapon abilities, monster special skills, and combos attempt to make things more interesting, combat quickly falls off in terms of enjoyment and becomes a rote, repetitive task. If you’re looking for a challenge, you won’t find it here. Your sidekick monsters act on autopilot, but can learn many useful abilities and skills, and you can ride them during combat to execute special abilities.

You hotswap between monster companions in combat to find the right skills you need for the job, and they also have out-of-combat abilities to help you break boulders, traverse water, or find items in the overworld. You can even go for “break offs” by targeting specific monster locations during a fight like the head, which may weaken it as well as dropping a valuable piece of loot –nods to the core franchise like these are interesting to see in turn-based translation.

Don’t expect anything resembling an engaging story despite the game’s name. I expect the dialogue will appeal to a younger audience, but it didn't resonate with me. Thankfully, the gameplay is the main allure. While Monster Hunter Stories doesn’t have nearly the amount of weapon and armor choices that appear in the main entries, you can outfit yourself to an offensive or defensive playstyle and upgrade your gear with monster parts. After you’ve mastered your skills, you can take on other players online with your ultimate team of monsters, which is perfect for players that want to really dig in to the endgame experience, as the title doesn’t really offer the hundreds of hours associated with one of the mainline games. Series fans might be put off by Monster Hunter Stories’ simplified combat, but I enjoyed the opportunity to pilot some of my favorite creatures from the franchise on the other side of the blade. Fans of turn-based JRPG fare, newcomers to the franchise, and younger gamers have more to enjoy here – to explore and engage with the Monster Hunter universe without having to enter through a less accessible door. Monster Hunter Stories is a warm and welcoming trek that’s only brought down by stale and repetitive combat. Despite its shortcomings, there’s still a neat egg to crack here.

8
About Game Informer's review system
Concept
Explore the various biomes and monsters of the Monster Hunter franchise in a turn-based JRPG form
Graphics
A vibrant and colorful take on the wild style that has been hammered into the series over the years
Sound
Like the graphics, the sound taps into established franchise staples to provide a sense of familiarity
Playability
Unlike the main series, which is known for being more difficult to get into, Stories screams accessibility for all
Entertainment
A solid if not earth-shattering turn-based take on the Monster Hunter world, tapping into aspects that make the Final Fantasy and Pokémon franchises enjoyable
Replay
Moderate 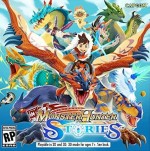