Monopoly is one of the most popular board games of all time. Chances are, you’ve got a copy of it at home in one form or another. Video game adaptations are nearly as ubiquitous, and over the years developers have tried to capture some of the original’s magic – with varying degrees of success. When faced with the opportunity to release another version of Monopoly, EA decided to do something radical. Rather than churn out a Monopoly-themed minigame collection or a bizarre licensed re-imagining, the company decided instead to release a faithful recreation with loads of optional trimmings. The result is easily one of the best versions of the classic board game to date.

Monopoly has been around for more than 75 years now. Whether it’s fair or not, the game has acquired a reputation for sessions that last nearly that long, too. However, it doesn’t have to drag on for hours if you follow the original rules. It’s certainly never going to rival Connect Four in terms of brevity, but if players actually read the instructions, judiciously auction off unwanted properties, and resist the temptation to do anything cute with the Free Parking space, a decent four-player game can be over in a little over an hour.

Sticklers can definitely have a great time with Monopoly Streets, but the game does allow players to manipulate the game with a stunning number of house rules. Chances are, if your family bends the rules a bit, you’ll be able to recreate that experience within Monopoly Streets. The presentation is pretty neat overall, with fully animated characters working in tandem with their pewter board-game counterparts. The battleship is paired with a curmudgeonly sea captain, the dog is being walked by a socialite, and the car is driven by a lantern-jawed racer. In addition, the characters gloat and express disappointment and frustration through Sims-like gobbledygook. Mr. Pennybags serves as the game’s emcee as players wind around a street-level view of the Monopoly game board. Properties are built up and razed before your eyes, and low-rent areas look different from the ritzy ones. All but the most easily entertained will likely choose to skip the movement animations after a game or so, but they’re cute the first few times.

The most video-gamey aspect of Monopoly Streets comes with its real-time auction system, which is a direct descendent of a similar mechanic from EA’s classic computer game M.U.L.E.  Players have 20 seconds to make their bid, represented on a bar graph in real time. As the timer counts down, players can increase and decrease their bids, faking out their rivals. It’s easy to bid unwanted properties up high and pull back at the last second, leaving your unsuspecting opponents with an unnecessarily high bill. The auction is a much peppier take on auctions than in past adaptations of Monopoly, which have generally worked on an excruciatingly slow turn-by-turn basis.

Essentially, if you absolutely loathe Monopoly with every ounce of your being, as some board game snobs do, Monopoly Streets won’t change your opinion. If you’re a casual player, on the other hand, it’s a great substitute for the real thing. And for instances where you can’t wrangle up other players in real life, the addition of online play for the Xbox 360 and PlayStation 3 makes it a completely solid replacement. 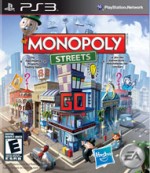 Essentially, if you absolutely loathe Monopoly with every ounce of yourbeing, as some board game snobs do, Monopoly Streets won’t change youropinion. If you’re a casual player, on the other hand, it’s a greatsubstitute for the real thing.

Purchase More Info
7.75
i
Game Informer's Review System
Concept Bring one of the world’s most popular board games to game consoles…again
Graphics Cute characters and a slick ground-level presentation look great, though you’ll probably skip most of the animations after a game or so
Sound Uncle Pennybags offers running commentary, accompanied by a jazzy score
Playability It’s a faithful version of the classic game, with just about every optional house rule imaginable
Entertainment Monopoly has a bad rep for lasting forever; stick with the stock game and it moves faster (and is more fun) than you might remember
Replay High