The original ModNation Racers was a flawed but entertaining attempt to innovate in the kart racing genre. Its easy-to-use toolset for creating and sharing content has produced over a million user-made tracks, karts, and racers for players to download, putting the offerings of Mario Kart's countless iterations to shame. While Road Trip's touchscreen support makes fashioning your own creations easier than ever, some old and new missteps make playing this handheld version significantly less fun than the original.

As with all Vita launch titles, a lot of effort has been placed in utilizing the handheld's unique features, primarily the front and back touchscreen panels. A wide range of gestures let you place, resize, and rotate objects and decals, lay down and shape roads, and even bank turns with ease. You may still want to use the control sticks to fine-tune your masterpiece, but the touchscreen lets you work quickly and naturally.

The solid controls carry over to gameplay as well. The Vita's small control sticks are responsive, and using the shoulder buttons for the gas and brakes instead of triggers is a non-factor. A number of new weapons (my favorites being a rockslide that bombards the track with boulders, and the ability to transform into a giant snowball and run down your foes) spice up combat nicely.

For every improvement, however, there's a frustrating downside. The developer crafted all-new tracks for Road Trip, but the career mode has been stripped of the cutscenes introducing your rivals and highlighting your achievements. The announcers also hit the cutting room floor, leaving the career mode less of a career, and more of a string of races.

After enjoying the first two competitive circuits, the action quickly takes a turn for the annoying. The later tracks, while impressive on a technical and creative level, are packed with so many obstacles and pitfalls that races devolve into chaos. This pandemonium is compounded by the worst rubberband AI I've ever seen; I won the overwhelming majority of my races by just a few tenths of a second, and lost many more at the finish line. There's nothing more frustrating than losing a race at the last moment, then shaving a dozen-plus seconds off your time - only to be beat at the last second again. Having your opponents always on your heels may ratchet up the intensity, but it also requires flawless racing to finish first, which Road Trip's frenzied action simply doesn't support. All of this makes racing against the computer less fun, which, it turns out, is a big problem.

The biggest of Road Trip's drawbacks is inexplicable: There's no online multiplayer support. You can still create and download user-made content - including everything from the PS3 version of the game - but if you want to race against humans, the best you get is a four-player ad hoc mode, or downloadable time trial ghosts. Even the PSP version of ModNation Racers has 6-player online support - what was Sony thinking? Downloading user-made courses is simply not as enjoyable when you can only play them in one-off races against the computer.

ModNation Racers remains a bastion for creativity, and I can only hope its focus on user-made content influences other kart racers and the racing genre as a whole. Road Trip's new touchscreen controls further refine content creation, but they aren't a game changer. Unfortunately, the lack of online multiplayer is.

Can't decide if you want to purchase Sony's new system? Read our review of the Vita handheld. 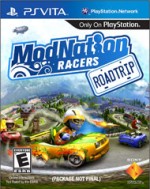 While Road Trip's touchscreen support makes fashioning your own creations easier than ever, some old and new missteps make playing this handheld version significantly less fun than the original.


Purchase More Info
7
i
Game Informer's Review System
Concept Bring ModNation Racers to the PlayStation Vita, taking advantage of its unique hardware features
Graphics Not up to par with the PS3 version, but still impressive
Sound The catchy soundtrack is the only thing that stands out
Playability Thanks to the Vita's dual control sticks, steering your Kart feels great
Entertainment Players will have no shortage of tracks to check out, but the lack of online multiplayer is a major disappointment
Replay Moderately High