The boo-birds come out when perennial all-stars are ice cold in the opening months of the season. Fans believe these players didn’t take care of themselves in the offseason, and treated spring training like a vacation. In reality, April’s frigid weather and windy conditions impact player abilities and limit the flight of the ball. As the weather heats up, so do these players.

MLB The Show 18 is the video game equivalent of the slow starter. Online performance issues have become an unwanted annualized feature – so much so that Sony made online infrastructure a central focus of development this year. In previous years, Sony has patched up or stabilized the online experience as the season progressed. This year, the development team didn’t want the online experience to start out cold, but achieving this goal meant difficult cuts.

In prioritizing new technology, Sony was forced to remove online franchise from this year’s game. Offline season mode is also oddly absent. These are two huge avenues of play that delivered different experiences for people – whether it’s shortening up a season for a breezier path to the playoffs or spending significant time battling friends for the pennant. Both are gone. Did the cuts pay off? As of this writing, MLB The Show 18’s online performance has not improved over previous years. It may even be worse. Along with intermittent latency issues on the field, which can lead to players running past balls or pitches accidentally served up as meat, all online avenues of play are subject to inexplicable loss of progress. A productive morning of playing Battle Royale ended with my experience points and Stubs disappearing, never to return. On another day, I couldn’t locate some cards I purchased with Stubs, and wasn’t reimbursed for them. Servers are also occasionally down during peak hours, and not just for maintenance.

Stability isn’t the only frustrating element of online. As much as I love seeing legendary players like Vida Blue taking on Babe Ruth, the means to obtaining these players is comical. To unlock the best version of Jackie Robinson, I need to get Chase Utley’s program souvenir, another program that isn’t even in the game yet and is listed as “coming soon,” exchange dozens of hats and jerseys, tally 10 hits with a different version of Jackie Robinson ONLY on April 15, and/or perform a bunch of other crazy tasks. Getting immortal or diamond-rank players in The Show has always been a lengthy process, but it’s out of control this year.

Opening a pack of cards to find hats, jerseys, bobble heads, and other unwanted things just strips away the chance of getting a player you can actually use in play. The images on the cards are also showing age. Tommy La Stella is pictured on the Braves, a team he hasn’t played for since 2014. Many players just have silhouettes as images. The Show’s troubles are mostly contained to just the online component. As usual, Sony has refined the action on the field, which is better than ever this year. New ball physics lead to a wider variety of hits and bounces, and players react to situations in more realistic ways – such as a batter holding up in the batter’s box for a brief second to see if a ball is slicing foul, or a catcher pouncing on a squibber or blocking a ball in the dirt. Catchers get out of stance much faster and can’t be exploited as easily. Fielders are more aware of the runners and apply more authentic tags, depending on how the runner moves. Opponent A.I. is also much savvier, using more shifts and deploying different bullpen and hitting strategies for specific situations. I lost a game to a suicide squeeze in the ninth inning.

The flow of the game is also enhanced with a wider variety of shots of fans, the stadium, coaches, and players. Full-motion replays also add to the broadcast presentation, even though Mark DeRosa’s color commentary is frequently repeated or too generalized.

The control you have over the action is largely unchanged, but you get a better insight into what went wrong with your swing through the redesigned feedback system. The revamped ball physics lead to more hit types and player reactions, but I saw an unusual number of balls bobbled and dropped.

Road to the Show received the most tweaks in terms of how progress is logged. You can no longer create a player capable of reaching level 99 in every category. You must now select an archetype, which has strengths and weaknesses that are capped in specific categories. It makes more sense to hone those skills, and I love the move away from assigning experience points. All gains and losses come on the field and through training. Players get called up quicker if they are tearing it up; my Road the Show player from last year (who toiled in AA ball with a .400-plus average) was immediately called up to the majors when I loaded him up. That’s awesome.

Franchise mode is improved, not from additions, but the streamlining of menus and tasks. All aspects of managing a team are broken up into phases that cover the draft, trades, mid-season play, and more. All of these areas feature shortcuts and can be turned to manual or auto with just a click of a button. Sony also added Retro mode as a style of play for Franchise, which is a bit odd given the arcade framework works against the simulation stats to a degree, but it is fun to compete in a throwback game from time to time. CPU trade logic and roster management looked spot on; it's nice to see cold players getting benched for a game here and there. That's a touch I never expected to see.

Load times for all avenues of play are better, and the play on the field is once again a showpiece of iteration, but the online aspect of the game – where Sony is focusing the most for additions – remains unpredictable at best and completely broken at its worst. As the season goes along, the experience will hopefully get better, but for the hardcore baseball fans that purchased the game early, it can be a nightmare. 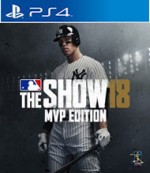 MLB The Show 18 pushes players to compete online, but just getting there is proving problematic.

Purchase More Info
6.75
i
Game Informer's Review System
Concept Better than ever between the foul lines, but the pursuit of online stability hasn’t paid off for this year’s iteration
Graphics New cutaway shots bring out the flavor of the game between pitches, and the small transitional animations on the field up the realism. The player creator is also deeper than before, and even allows you to sculpt your own batting stance
Sound The commentary often offers great insight into the history of the sport and the strategy players deploy, but is also highly repetitive. Color commentator Mark DeRosa is repeated the most, and some of his lines don’t line up with specific situations
Playability Gives players complete control of the action and at the skill level they feel the most comfortable. Developing a player in Road to the Show is a more rewarding experience this year
Entertainment The online play is clearly where Sony wants people to spend time, but just connecting to the servers proves problematic
Replay Moderate