In 2013, Colorado Rockies first baseman Todd Helton used the hidden ball trick to record the final out of an inning, faking a throw to the pitcher to make Matt Carpenter of the St. Louis Cardinals step off of the base. This year’s MLB The Show also appears to have something to hide, as prominent new features push players to steer clear of the main game to experience a retro-styled arcade mode, manage a team through a simulated gamecast, or even spend time in the locker room figuring out what a rookie says to his agent on the phone.

It turns out The Show has nothing to hide. The new diversions – as enjoyable and varied as they are – pale in comparison to the action on the field. The Show has always strived for realism, and this year’s game adds even more nuance and unpredictability to the mix. Most notably, the robotic instincts of players are reduced, and outcomes of swings aren’t determined mostly by dice rolls.

Players are not just defined by numbers this year. The introduction of a new feature called “quirks” gives each player a defined skill set. Brian Dozier has a Bomber quirk that allows him to hit more home runs. Adrian Beltre rarely misses the ball while swinging thanks to his 20/20 Vision quirk. Anthony Rizzo has a Rally Monkey quirk that ups his performance when the Cubs are behind. Billy Hamilton is a Bunt Master and Thief. Some players just have one or two quirks, but most superstars are stacked with them.

These boosts greatly impact the composition of an at bat, affecting how you approach each player and how the A.I. reacts. Facing Mike Trout late in a game is stressful no matter what, but knowing he’s now an even greater threat in this situation ups the intensity. I just wish the quirks weren't buried in menus. This is just one way that The Show produces new situations and outcomes. A small tweak to the ball physics also goes a long way to creating more hit types and play variables. In past games, the ball would bounce unpredictably off of walls, but not off of the bat. This year, the ball spins accurately off of the bat and at appropriate speeds to produce more slices, bloops, and rockets. Computer-controlled fielders sometimes struggle with the new trajectories, not from bad pathing, but the A.I. making bad choices.

In prior versions of The Show, a fielder would never speed up a throw; the animation was the same for a routine or close play. Fielders now show awareness for who is running and just how much time they have to make a play. The new animations for these variables are fantastic, nailing small details like accurate arm speed animations, or a panicked throw from the ground. These great plays are framed nicely within the new presentation package, consisting of stylish statistical overlays that show the speed of the throw and the path taken to track it down.

This year’s game excels both on and off the field. Both Road to the Show and Franchise mode received major facelifts to try and shake up the age-old foundation they are built on.

Developing an up-and-coming Major Leaguer in Road to the Show now unfolds through a documentary-like story. Outside of little interactions that define your personality through choice, the narrative didn’t sync with my player’s performance, or deliver many points of interest. I belted 40 home runs in my first two months in double A, and my team didn’t promote me. A second playthrough in those two months produced almost an identical arc. The story doesn’t ruin this mode – the player development and on-the-field play are still great – but it also doesn’t enhance anything. Yes, it’s fun to be a jerk to your coaches, but you aren’t given much feedback as to how that is affecting your team or your future on it. Franchise mode fares better, and finds a clever middle-ground solution to the thoughts of “simulations are boring” and “playing a season takes way too long.” A new mode called Quick Manage allows you to have a hand in every at bat, yet the game can be completed in just five minutes. This mode functions like simulation, showing an overhead view of the diamond with players represented as colored dots. You have complete control of your player output, determining whether you pitch to contact, around the batter, or to walk them. One button press produces a result for that at bat. If you don’t want to leave the outcome up to a dice roll, you can jump in and play it, and then return to the simulation or continue playing. After the initial load it takes to enter that at bat, the game won’t load again, meaning you can hop in and out of instances in the blink of an eye. I grew fond of Quick Manage, and used it for most of my Franchise play.

If Quick Manage still sounds like too much, you can just play out critical situations during the season, which are prompted during the simulation – another nice addition that adds some gameplay to the menu-focused experience.

Franchise mode once again allows you to micro-manage every facet of your team, right down to the budget, scouting, and player moods. You can now select the level of complexity you want from these tasks from the outset. Easy handles just coaching, medium rolls in player development, hard adds general manager tasks. You can still turn these functions on or off, but from the outset, you can tailor the experience to your liking. Trade logic and the simulated results didn’t produce too many oddities in the three seasons I simulated.

Diamond Dynasty once again makes card-collecting fun, but not from an influx of new game modes that made it so appealing last year. Those modes all return (and are largely the same), but an addictive hook comes from adding new players to your team. I know this is what this mode has always been about, but this year’s game offers over 2,000 to collect, spanning over 80 years of MLB history. My team ended up having Reggie Jackson, Jeff Bagwell, and Javier Báez in the lineup. If that doesn’t scream “awesome” to baseball fans, few things will. Again, cards aren’t delivered fast enough, and that dark cloud of “pay-to-win” hangs over the collecting. Thankfully, you still don’t need to spend a dime to excel at Conquest mode, Diamond Dynasty’s most enjoyable avenue of play.

Sony also included a novelty Retro mode that turns back the clock to the 1980s. Designed like a game you would find on NES, the batter can freely move in the box, and the pitcher can change the trajectory of a pitch mid-flight. Balls jump off of the bat to the sound of a slide whistle, yet the visuals hold the same high level of realism as in the core game, painting a strange mishmash of today and yesteryear. Retro mode is enjoyable, but is designed mostly for head-to-head matchups against friends – offering no form of stat-tracking or season play.

MLB The Show 17 is an ambitious game that tries to dazzle players with new avenues of play and a story, but is at its best on the field, where the action has never looked or played better. After slumping last year, Sony came back firing with an experience that feels new again, even if its foundation stretches back over a decade. 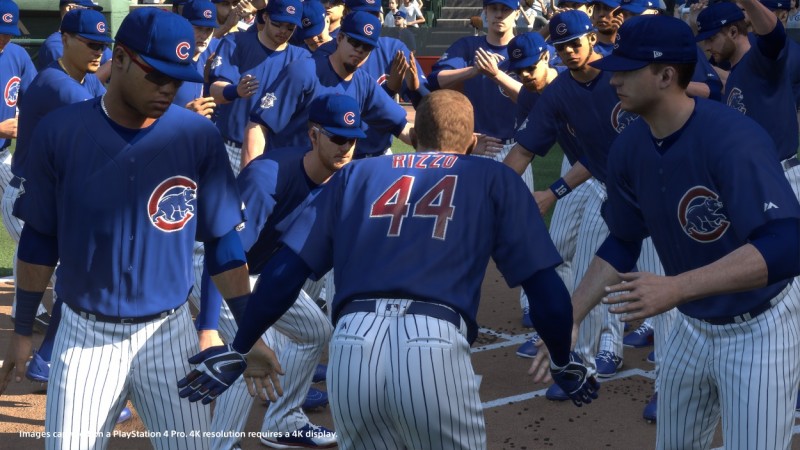 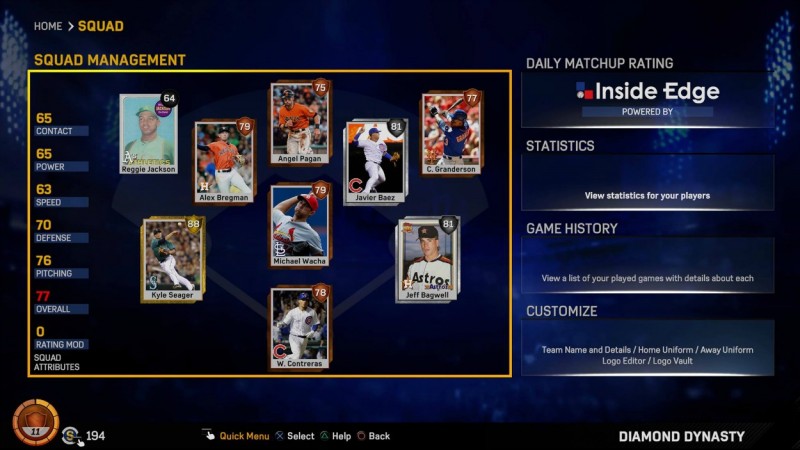 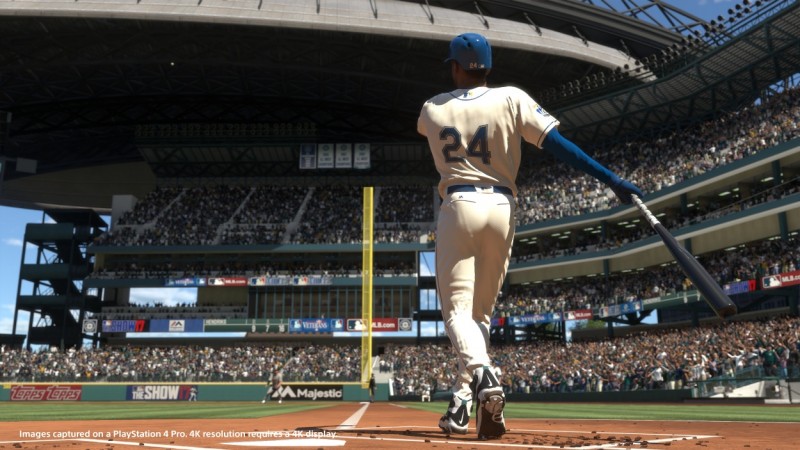 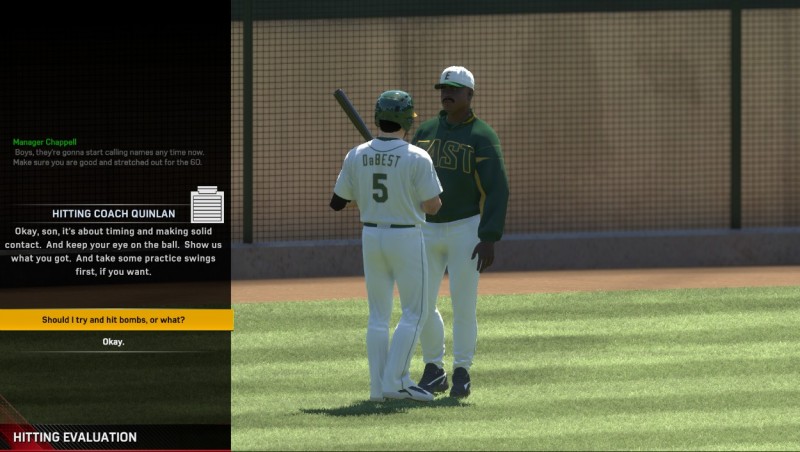 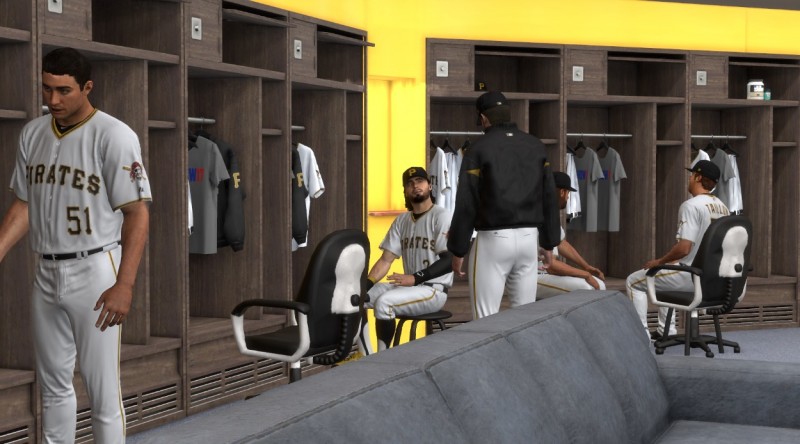 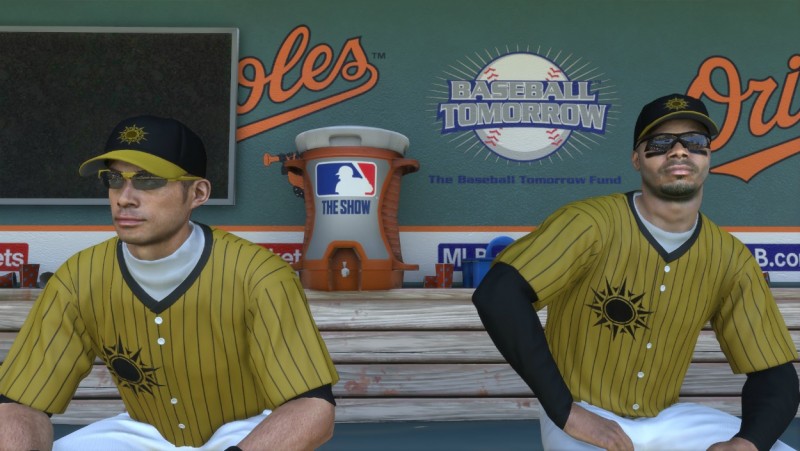 9
About Game Informer's review system
Concept
After a down year, The Show rebounds nicely with a suite of exciting new features and ways to play
Graphics
New facial scans and eye details bring out a higher level of realism, but all forms of hair still look a little odd. Enhanced dynamic lighting makes the stadiums pop, and helps convey the passage of time
Sound
Harold Reynolds and Dan Plesac join the commentary booth, providing key insight into the sport and developing situations. The commentary rarely focuses on individual players
Playability
No longer just a game of numbers. Each batter and pitcher has defined skills that can affect the at bat. Modes offer a wider selection of ways to engage simulations and gameplay
Entertainment
Road to the Show’s story isn’t captivating, but that’s a small blemish in a monster of a game that knocks most of its content out of the park
Replay
High 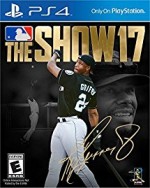