Minecraft: Story Mode's sophomore season tells the story of Jesse and friends as they struggle against the seemingly all-powerful Admin. Last episode featured a breakneck pace that relied heavily on action sequences, which masked the fact that Telltale's formula is aging. This episode brings an interesting premise of locking the crew in a zombie-infested prison tucked behind a labyrinth, but aside from a couple of standout moments, the result is a mostly forgettable entry.

If last episode was a detour from Telltale's aging approach to adventure, this episode accentuates it. The repetition of being dumped into a room until you talk to the right person or look at the correct piece of a wall has been tiresome for a long time, and this episode doubles down on that concept. While Jesse's friends are locked away as well, many of the characters you interact with in the prison are fellow prisoners that feel like insignificant one-shots in the grand scheme of the series. The episode does a good job presenting entertaining characters, but it doesn't give me any reason why I should care about them beyond the scope of our conversation.

Most of the episode is spent in conversation trees, but some fun action sequences present themselves, as well as more free-building. However, unlike the free-build segments from the first two episodes, I'm less confident the structure I made will reappear in future episodes.

Though Jailhouse Block is largely forgettable, I enjoyed seeing how antagonistic Jesse could get when dealing with the authority figures in the prison, and the back half of the episode picks up considerably as the escape efforts mount. One moment sticks with me for giving me the most gut-wrenching choice I can remember in the series. I don't want to spoil it, but deciding between two characters I've grown attached to in a situation that feels like it could have real consequences for the characters had me sitting on the screen for a long time, then immediately regretting the decision. Though that particular situation upset me as the results played out, thinking back to how Telltale usually finds a way to work around your decisions to arrive at the same destination comforted me.

Regardless of any choice (or illusion of choice), my favorite sequence in Jailhouse Block came at the end as Jesse squares off against a massive, three-headed ghast. You control Jesse as he autoruns across the top of the labyrinth. Though you don't have to jump or avoid obstacles like a typical autorunner, you dodge fireballs flying your way and deflect them back using Jesse's sword. The music, the pace, and the gameplay combine to make this an entertaining moment.

Unfortunately, the rest of the episode is a slog. With so much conversation with characters that feel like they'll be left in the past after this episode, a dreary prison setting, and gameplay that generally fails to engage, Jailhouse Block is the weakest entry of the season. The fleeting high moments like the difficult decision or the climactic battle don't save the episode. However, like most episodes Telltale releases in any of its myriad licensed series, it ends on a solid cliffhanger that has me intrigued about what happens next. 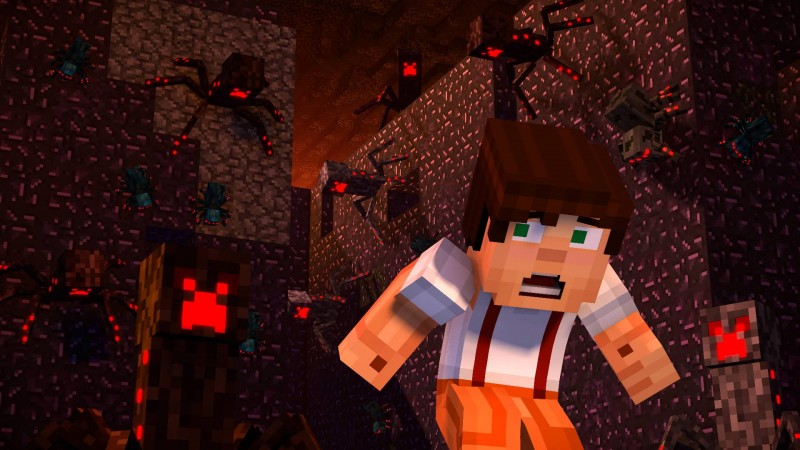 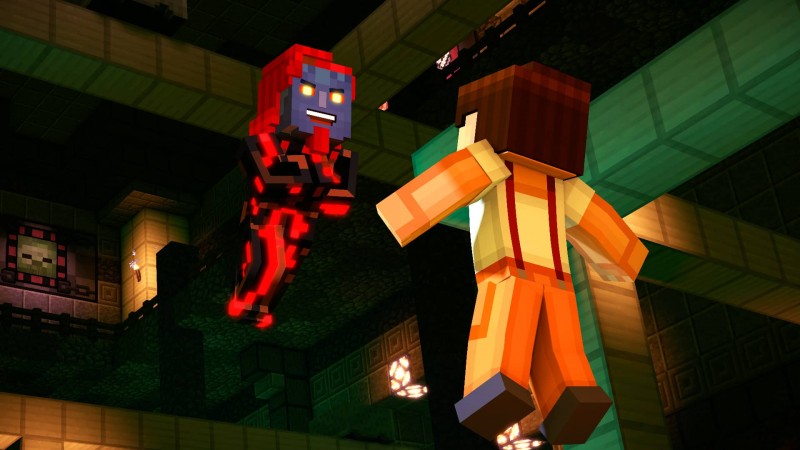 6.5
About Game Informer's review system
Concept
Continue Jesse and friends’ Minecraft-themed adventure as they attempt to escape from a dangerous prison
Graphics
Minecraft: Story Mode has always featured bright blocky environments, but the dark grey walls that surround Jesse through most of the episode make this one of the least-attractive episodes
Sound
With an awesome cast, the voice acting continues to shine. However, some of the music tracks are also great this time around
Playability
Outside of a couple of simple puzzles and action sequences, you spend much of this episode navigating conversation trees
Entertainment
With forgettable sequences through most of the episode, Jailhouse Block is the weakest episode of the season
Replay
Moderate