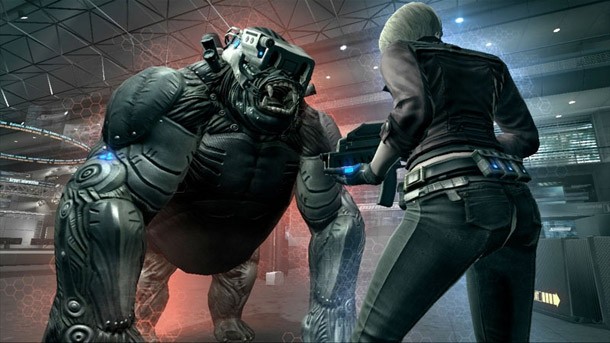 Nowadays, an untested third-person shooter needs to stand out in a crowded market by offering something different. Mindjack sports two unique features: The titular Mindjack ability that lets you remotely control enemies and robots, and a seamless transition between single-player, co-op, and competitive multiplayer. While these elements may temporarily pique the interest of gamers, ultimately Mindjack only stands out because of its unforgivable shortcomings.

Mindjack’s hacking ability is an entertaining but flawed feature. Players can hack into the mind of any enemy on the battlefield and use their new bodies to attack other foes. However, several hurdles make this ability less useful than it should be. You have to incapacitate enemies before possessing them, and since you can’t inhabit corpses, well-placed headshots often render potential vessels useless. Civilians can be hacked at any time, but the mechanic is still cumbersome due to delays as you leave your body and enter another character.

Once you leave your body, traversing the environment as a floating entity is painfully sluggish. You can avoid wasting time by scrolling through potential bodies with the shoulder buttons, but you can’t tell where they are in the level. There’s also no way to default back into your own body, and you’ll often find yourself scrolling through half a dozen targets before you come to the main protagonist.

These annoyances are all minor compared to the hacking mechanic’s biggest flaw. As soon as you leave your character’s body, the dreadfully stupid AI takes over. If you’re lucky, this will cause your character to inexplicably backtrack through half the level; at least you’ll know he’s safe. Other times, he’ll blindly walk headlong into danger, promptly getting himself killed while you’re still picking a new character to take over. If you and your dedicated AI partner are simultaneously incapacitated, it’s usually game over. You can technically use a possessed body to revive the main characters, but since you’re only given a handful of seconds to do so, the aforementioned delays make it nearly impossible to get to them in time.

Allies aren’t the only stupid ones in Mindjack. The bad guys are so oblivious you’ll think someone already mindjacked them. I witnessed my foes run past right past me while I was standing in the open, stare blankly as I peppered them with bullets, and blow themselves up with rockets. Instead of introducing smarter enemies, Mindjack just throws larger groups of stupid ones at you as the story progresses. 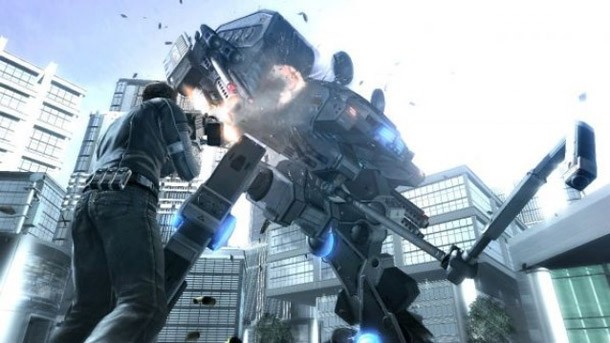 When you strip away the game’s mind powers, Mindjack is a textbook example of how not to make a third-person shooter. The gunplay feels sluggish, as if you're moving your reticule through water, and the disparity between where you’re aiming and where you actually shoot leads to entire clips pumped into doorways. You’ll also grapple with an annoying cover system that glues you to your environment at all the wrong times, a stupid vaulting mechanic, and a broken melee system. A blurry, shaky, and unresponsive roadie run fleshes out Mindjack’s list of subpar mechanics.

Even after you get used to the control problems the game is far from being a cakewalk, as your enemies are overpowered on the default difficulty, and you have to replay large sections of the game whenever you die. Throw in a few overly long and confusing boss battles, and a plot with a twist that even a monkey would consider obvious, and the eight-hour campaign feels like a monotonous grind.

After playing through the campaign alone, I wasn’t particularly looking forward to delving into multiplayer, but to my surprise Mindjack offers a bold approach to online gaming. Instead of the typical tacked-on modes, gamers play through the same campaign – by default, online players can actually enter your single-player game unless you switch the option off. When more than one human is present, players are split into two teams, with the blue team taking control of the two protagonists and hacked civilians, while the red team jumps into the enemies. Upon dying, red team members possess another one of the finite enemies in each area, while blue team members must coordinate to revive the main characters.

Having had my fill of Mindjack’s stupid protagonists, I played mostly as the enemy, and genuinely enjoyed ambushing the blue team with every foot soldier, robot, and cybernetic chimp I could find. Mindjack also features a pervasive leveling system, unlocking tweaks such as increased accuracy or increased XP whether you are playing alone or online. The only downside to the multiplayer (besides the still-lousy controls) is the fact that other people aren’t playing it – unsurprising considering Mindjack’s numerous shortcomings.

Mindjack’s hacking gimmick adds an interesting wrinkle to the third-person shooter genre, and the way it blurs single- and multiplayer gameplay is a trick worthy of future exploration. However, its few innovations are vastly outweighed by old annoyances. Myriad control problems, brain dead AI, and a cringe-worthy storyline make Mindjack a shooter worth skipping.

5
About Game Informer's review system
Concept
Blur single-player and multiplayer in a creative shooter
Graphics
Environments all look the same and the special effects are underwhelming
Sound
The cheap techno soundtrack is annoying, and the dialogue is so stilted that the lines sound like they’re being played in a random order
Playability
Mindjack suffers from just about every control-related problem a third-person shooter could have
Entertainment
Mindjack’s interesting ideas can’t overcome its bad controls and worse storyline
Replay
Moderately Low 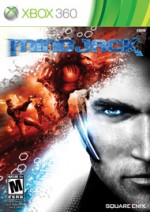