Might & Magic X: Legacy blends modern sensibilities with the classic turn-and-tile-based RPG of days gone by. The title conjures up notions of older Might & Magic games, particularly the World of Xeen, and implements streamlined character building, friendly UI, and a bit less complexity. It’s a completely satisfying nostalgia romp for the old-school PC gamer, and an accessible, modern delve into the core PC RPG.

Players can build parties from scratch or use a well-balanced pre-constructed template. It’s refreshing to be given the tools to set up potential failure in an industry that’s continually pushing toward “Push a button during this quick time event to win.” The title features two different difficulty settings, essentially boiling down to a mode for new players and one for hardened veterans. The ability to fashion drastically different team compositions makes for a good deal of replayability, and allows for a lot of interesting testing opportunities.

Once you’ve assembled your band of wizards and warriors, you’re ready to hit the town. The game is much more user-friendly than the Might & Magics from the early '90s, but manages to retain the essence of its forebearers. Players can roam town to find various power ups, coin, and quests that send them out into the wilderness. While the party size is locked at four, players can pick up additional hirelings to fill specialized needs. If you’re like me and your team consists of three bladedancers and a freemage, you may want to hire a roguey type to help discover traps and secrets as a tag along.

The gigantic skill lists are distilled a bit in this modern release, and players will have a much easier time deciding on where to place skill points and stat upgrades. The system allows for plenty of customization and freedom while making things a bit harder to completely gimp a character.

There are choices to make, puzzles and brain-teasers to solve, loot to collect and identify. While some zones are locked and tied to story progression, curious players will often find themselves wandering into zones that are far too challenging just a tile or two off the beaten path. The title’s bosses do not disappoint in the difficulty department, and you’ll find yourself thanking the autosave feature more than once as particular mechanics with each encounter can end up surprising you. Fighting on a tower? The boss’s knockback attack is not just window-dressing.

A minor irk is that the way a player progresses through the game and story is largely fixed, which is a stark contrast to the vast array of options that titles from yesteryear presented. Granted, this comparison may be slightly unfair as the World of Xeen was actually several titles bundled together to create an enormous world, but Might & Magic X: Legacy left us wanting more in the content department. That’s not to say there isn’t optional content, as there are a plethora of various crypts and caves to explore for additional experience and loot, but the basic playthrough will have players going through essentially the same experiences in a linear fashion.

8.25
About Game Informer's review system
Concept
A modern take on the classic Might & Magic PC RPG
Graphics
Not amazing, but fitting for achieving the style and look of past titles
Sound
More reminiscent than revolutionary, but suits the title fine
Playability
Possibly the most accessible game of its kind, with simplified interface and commands
Entertainment
Fans of the series looking for a true successor to the earlier groundbreaking titles will find a pleasing trek down memory lane. Newcomers will find delving into the title much easier than any other recent attempt at recreating the core PC RPG experience
Replay
High 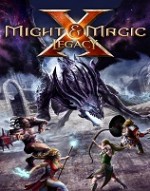